Mirror Movies with The Luck of Eden Hall - An Interview

Q. When did The Luck of Eden Hall start, tell us about the history...
A: I was asked to move to Chicago (from Kalamazoo) to play drums in my friend Doug Chamberlin’s band Scarlet Architect, which was a three piece all keyboard outfit opening for bands like Snake Finger, Lena Lovich and Human League, and at the time I was truly excited. Unfortunately the band split up upon my arrival, but I started working on songs with Doug, and formed another band playing some of those songs he and I had written together. That band included Wayne Wells, who currently fronts Static X. I left those fellows and put together a traditional three piece, plus cello, with my friend Mark Lofgren, whom I’d always wanted to work with, and The Luck of Eden Hall officially formed in 1989, releasing a full-length album on cassette called Corner Of The Sky. In 1990 we were picked up by Limited Potential records and released the single Hook, Line and Sinker (Limp007. Smashing Pumpkins first single was Limp006). We recorded and created artwork for an album to be called Victoria Moon for Limited Potential that was never released. Those studio tracks were all trashed, though some of the songs have been rerecorded. (Darling Dear made it on to Belladonna Marmalade, Silly Girl on Butterfly Revolutions Vol.2.) A video was filmed for one of the tracks, Man On The Moon, which was used in the New Line Cinema film The Day My Parents Ran Away and after that Limited Potential dropped us, so we started our own label, Walrus Records, releasing three projects (Belladonna Marmalade, Under The Sea, Sunny Girlfriend). Under The Sea made the cover of CMJ, but it was during that time our cellist ran off to play with Smashing Pumpkins and we became a three piece. In 1997 I recorded a solo project that became Par Crone, featuring my newly acquired Arp Synthesizer (circa 1972), and traveled to India. While on my travels I had an enlightening moment, which prompted me to sell a lot of my gear when I returned, and I stopped playing music for a while. It seemed to me at the time that I was swimming against the current and needed to change directions, so I focused on my painting abilities and built up Gregorian Designs, which is my business for murals, detailed stenciling and illustrations. In 2000 Mark and I started to lay down tracks again, and some of those songs (Babymoon, Device) became the foundation for Subterrene, which we released in 2006. That was the first time I had full control of production and I really learned a lot recording Subterrene. In 2008 we recorded When The Clock Starts To Wake Up We Go To Sleep and decided it was time to get the band back together and roll. That was the first album I was really proud of and it’s the one I’ve held as the standard to all of our recent works (Butterfly Revolutions Vol. 1 & 2 in 2011 and Alligators eat Gumdrops in 2012).

Q: Make a list of 5 albums of all time…
A: The White Album by the Beatles, Zen Arcade by Husker Du, Blood Sweat and Tears by Blood Sweat and Tears, The Psychedelic Furs by the Psychedelic Furs, 25 O’clock by The Dukes of Stratosphere. These are just a few that have touched my soul and I really should continue…Machine Gun Etiquette by The Damned, Foxtrot & Nursery Crime by Genesis, Quadrophenia by The Who, Roxy and Elsewhere by Frank Zappa, Super Unknown by Soundgarden…. 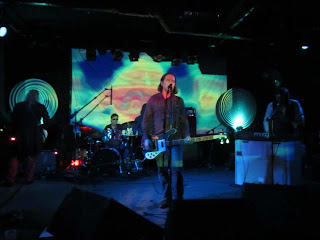 Q. How do you feel playing alive?
A: I have grown to love playing live. Nerves used to get in the way in the early days, but now I really have a great time. The spontaneity of a live performance, especially when we play A Drop In The Ocean or She’s Using All The Colors, is always a gas. I am very fortunate to have such a fantastic band. Carlos Mendoza is one of the best drummers in town and Jim Licka keeps all of us in the proper psych mood!

Q. How do you describe The Luck of Eden Hall sounds?
A: Popped psychedelic rock & rollisms. Always based on a melody to be sure!

Q: Tell us about the process of recording the songs?
A: Rabbithole Studio is my home recording outfit. It has allowed me to hide in the basement and throw down ideas (some bad, some very, very bad, and occasionally a real shinning keeper). I also hum ideas into my cell phone. Melodies are very ethereal and just when you think you’ve got it, and couldn’t possibly ever forget it because it’s been looping in your head for an hour or so, shazaam! It’s gone. So, that is where I start. The melody. I may come up with a lyric to fit the hook at the same time, but usually write all of the lyrics after the song’s been finished. When recording demos I’ll lay down a scratch guitar track and some verbal nonsense to follow. Sometimes the verbal nonsense makes it into the final version (Listen to the background voice in She’s Using All The Colors). Many times the first guitar solo is the keeper, though sometimes I’ll learn it and double it. My production ideal is for a song to feel a little raw and not too over thought and drums must make the listener feel like beating on the table!

Q. Which new bands do you recommended?
A: The Red Plastic Buddha, Sendelica, Strychnine, I Lost Control, Permanent Clear Light. 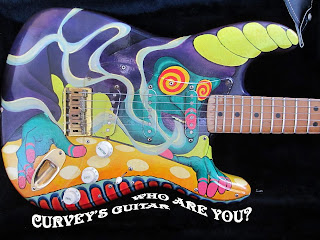 Q: Which bands would you love to make a cover version?
A: Fruits de Mer records have given me more opportunity than I ever dreamed to record cover songs. The Luck of Eden Hall rarely ever plays cover songs. The only one I remember is Day After Day by Badfinger, and that was years ago. I generally don’t think about covering songs, only getting songs out of my head and into the studio. So much to do…so little time…

Q: What are the plans for the future....
A: We’ve just released a video for Sassafras Overcoat, which is to be included on our next album. Mark Lofgren edits and produces all our videos and we plan on releasing a few more before the album drops. I kept all the artwork I had created for the unreleased Victoria Moon I mentioned earlier, and we’re going to use it for this Summer’s release. It’s actually inspired some new songs (Madelaine’s 2nd Voyage, Underneath Another Parasol) and being that the art was originally pre-Belladonna Marmalade (this year is the 20th anniversary) it makes this project a little time trip. An historical peek into the future. I’m really excited about the new material!

Q: Any parting words?
A: Remember to do what you love and love what you do, because there is no payoff in the end. And don’t dwell on your mistakes or the next punch may just knock you out! Cheers!
*
*
*
Thanks Curvey