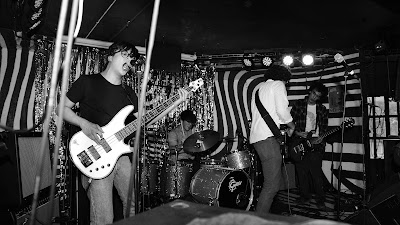 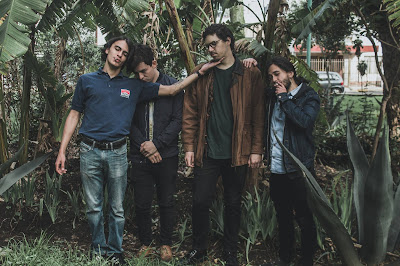 Q. When did El Shirota start? Tell us about the history…
El Shirota started as Alonso, Mauricio and I (Nacho) met each other over the internet and at parties at our neighborhood. We saw a mutual interest in a lot of band we thought were cool so we decided to get to know each other and start jamming. At the first time we jammed Mauricio brought and idea for a song and we got a rush out of playing it together, me as a drummer and later jumping to the guitar as we were approaching a musical direction we liked in the band. A year after playing together we recorded and released ​Chiluca no es Satélite,​ our first EP, it contains that very first song Mauricio brought to our first rehearsal called “Aquí hubo escena”, which could be translated as “Here there was a scene”.

Q: Who are your influences?
David: OMD, The Cure

Nacho: Lee Ranaldo, Arthur Russell, Nick Drake, Stephen Malkmus, Neil Young, Luis Alberto Spinetta, Kurt Cobain, the list could go on and on, I tend to hesitate on this kind of questions.

Q. Make a list of 5 albums of all time…
David: ​Pornography​ by The cure
Rubén: ​Joe’s Garage​ by Frank Zappa
Emman: ​What People Say I Am That’s What I’m Not ​by Artic Monkeys
Nacho: ​Wowee Zowee​ by Pavement, ​Meddle​ by Pink Floyd


Q. How do you feel playing live?
As musicians, or music lovers, playing live is probably one of the most fulfilling sensations. Maybe it could be compared with having sex. It’s challenging but rewarding at the same time. Sometimes people don’t take in account all it takes for a band to play live. From the money and effort placed on the gear, transportation to the rehearsal, the time that has been spend practicing (if you aspire to be a professional), the opportunity to play on this or that venue that will hopefully give a chance to your band to have a break through. It all comes down to that sound coming out of the speakers, everything fades away once you play that first note, and you have to commit to it, because once it’s being played there's no turning back. It’s not like a recording where if we are quite objective it’s an endless delay of something pre-recorded, a very long delay if you will. Live it’s different there is no wall between you, the audience, and how you are able to perform. One of the greatest feelings ever.

Q. How do you describe El Shirota sounds?
A thrilling compilation of rock subgenres that mixes the best of our influences, a little of “wall of sound”, overdriven sharp guitars, mood changing songs and a lot of jamming and improvising, mixed with a defined punk rock and post-hardcore influence from all decades. Q: Tell us about the process of recording the songs ? We usually jam ideas, or often only gather to play and improvise and record ideas. One of us bring ideas to the rehearsal room and we spice them with everyone’s touch.

Q: Which band would you love to made a cover version of?
David, Animals-Pink Floyd.. Hahaha


Q: What are your plans for the future?
We’re writing new material. Probably our very first full length album, we also want to tour outside Mexico, get to know band outside our country and share our love for music and knowing new bands and musicians all over the world.

It was thrilling to respond this interview, we know the blog for such a long time and it’s an honor for us to talk to you finally. :~)
*
*
*
Thanks