Hopes are Overseas with No Crafts - An Interview 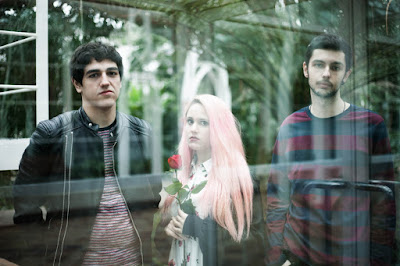 
Q: When did No Crafts begin? Tell us about the history...
- We met a long time ago, when we were at school almost 15 years ago. We’ve always been interested in music and we started playing our instruments on our own. One day talking we thought that playing together could be fun, so after playing a few covers, we decided to write our own music. That´s how we decided to start this adventure called “No Crafts”. We always say this, but we are siblings from different parents, working together it’s easy for us and everything flows easily.

Q: Who are your influences?
- We are always listening to music and we discover new stuff very often, so this makes our songs vary a bit. Anyway, no matter what, we will always remain faithful to our sound. In this three years he have evolved a lot, but you can differentiate our spirit in every single song. Each one of us listen to different genres of music, so we have different views even on our own ideas. The fact that we listen to a certain kind of music doesn’t make us necessarily sound like them. We transfer to our music the things we like the most; an example: Carlos is really into jazz right now, so now he is introducing new chords to our songs that he didn’t use before.

They are not ordered in any particular way, they are all such good records…

Q: How do you feel playing live?
- When we are on a stage, there’s some kind of energy that connects the three of us and the crowd. We feel good, we feel alive, it might be a cliché, but it is true. If you truly enjoy what you are doing, you don’t want to be anywhere else.


Q: How do you describe No Crafts´ sounds?
- For us (and almost every band we know) it’s a little difficult to define our sound. We’d say it’s a nice mixture of garage, surf, 80’s spanish pop… Here in Spain, in the 80’s, there was a trend called “La Movida”. It was kind of synth pop (sort of Depeche Mode, New Order…) with a punk touch. It was a movement which influenced art, music, style… For us, it would have been a pleasure to live that. It's funny, cause “La Movida” has influenced a lot of current spanish bands, but no one in the 90’s seemed to like it.

Q: Tell us about the process of recording the songs.
- We usually start with an idea, it can be a riff or a short melody, and then we jam over it. We start recording when we think we have something to work on. Carlos and Ángel help each other with the guitar, bass and synth; Celia works on the drums, and the voice melodies and lyricss are developed by Celia and Carlos. Sometimes we finish the song very quickly, but some other times it takes us several months.

Q: Which new bands do you recommend?
- Maybe Rejjie Snow, cause he has created a rap sound that a lot of people likes, people who are into Cuco or Clairo’s music (a very different style) are also interested in him, he’s catchy. We could also say Rex Orange County, but we think we are way too late.

From Spain we recommend a band called Medalla, they have a very particular style that flirts with heavy metal and their lyrics are amazing.

Q: Which band would you love to make a cover version of?
- We have played only a few covers throughout our career: a quite punky version of Pulp’s “Common People” and “Psycho Killer” from Talking Heads.

We would like to make an interesting one, something from Tyler The Creator or maybe Arcade Fire, which could be a little difficult because we’re just three.

Q: What are your plans for the future?
- We are releasing a 10” called “Heartburn” after summer. It is going to be more poppy than what we’ve been doing, so it’s going to be interesting to see how people receives it. It's kind of an "emo-pop" album, because the music is happy and catchy, but when you pay attencion to the lyrics you'll see they are more bittersweet than the music is. At this moment he have released the first two singles, “Heavy” (March) and “Hopes Are Overseas” (May).

Our most ambitious plan is to make a huge tour all over Spain and Portugal, and we’d love to play outside the peninsula too.

Q: Any parting words?
- First of all, thank you for letting us be here! We’ve noticed that we are receiving some nice feedback from Brazil, so thanks to everybody that invests some time to know us better and listens to our music. We would love to play in Brazil, we hope it won’t take long!
*
*
*
Thanks