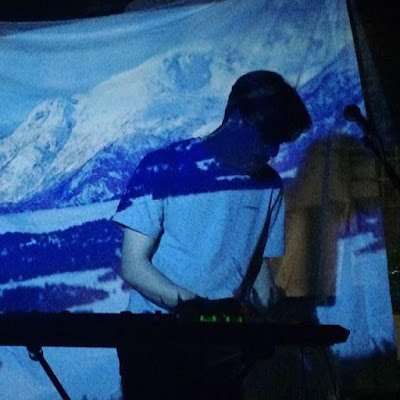 Q. When did Baltic Noise begin? Tell us about the history...
Q1: Baltic Noise began during my first semester in college around the fall of 2016 (Although I had played in several bands before that time.) I was going to a branch of the University of Pittsburgh in a town called Johnstown in Pennsylvania and had recently left my then band, Numerics. It was situated pretty far into the mountains and it took me about 4 or so hours to reach this spot from my home. So granted, I didn’t have many friends and decided to spend my time making music at my dorm or at my grandparent’s home nearby. Most of the tracks had a start in their home, it was so inspiring to me to be out in the forest in the winter time. It helped influence so much of those sounds. At the time, the name was different from what it ended up being and the sound was completely different. I was really involved in learning a lot of black metal and post-rock songs and I had really wanted that sort of aesthetic; but with more atmosphere and ambience. I was messing around with really early tracks in Fl Studio, a program used to produce music. I had learned a little bit about it the Summer before, but really only got into it when I was living at Johnstown. A lot of the tracks took form in my home when I decided to transfer to Millersville in Lancaster county. I had taken a gap semester and used that time to work and make music. I think in February of 2017, I completed the track “Abendrot”. It was mostly a guitar based song that I had ended up adding sounds to and manipulating the original samples, while overlaying synth parts. There are tons of Roland TR808 samples in that track. At this point, I was getting into very synth heavy music and finding a love for electronic music. I think at one point, I felt like that was a very daunting task, until I realized, I had already done it with this track. Soon after, a few more tracks came together and I had about 20 minutes worth of material. Fast forward a few weeks, I had learned Ableton and started booking shows. Thus, the first tape came to fruition and Baltic Noise was born!

Q: Who are your influences?
Q2: My influences change pretty frequently, as I like to keep things fresh. But, I think currently, I am really inspired by Boards of Canada’s work. It’s just so original and raw. It adds a level of intimacy that so much electronic music (I don’t know how they themselves feel about this title) is missing so often. I'm also working on blending my visual art with my music, something that the brothers in BOC are very good at. I am really inspired by Jamison of Teen Daze. He’s a very humble fellow who has a knack for creating soundscapes that are very akin to at home listening, yet still very adventurous and active. As usual, I’ll never wrap my head around what Autechre are able to do, but not understanding it makes me want to do it even more. So I’m always striving for a little bit of their creative process. The usuals are there too i.e Brian Eno, Baths, Lali Puna, etc.

Q. Make a list of 5 albuns of all time…
Q3: This one changes all the time, so I guess I’ll just list what it is currently. This is so difficult, haha.
Geogaddi by Boards of Canada
Young Mountain by This Will Destroy You
At Home With by Owen
Glacier by Teen Daze
Cerulean or Obsidian by Baths (I really can’t choose!)

Q. How do you feel playing live?
Q4: Playing live is a whirlwind. It feels magical! The first couple hours leading up are pretty stressful, usually thanks to anxious ticks. I like to have a level of improv to my set, which makes it harder to predict what will happen. Once I’m up there, it’s all gone and I feel content to share my art and bask in the half hour I have to pour my heart out.


Q. How do you describe Baltic Noise´s sounds?
Q5: I would describe Baltic Noise’s sound as organic and synthetic. There are samples that aren’t necessarily created solely with a synthesizer, found sound samples, and stringed instruments that are processed and distorted through so many layers. I couple these sounds with a drum machine and synthetic instruments. My influences stem from many places, so it’s cool to be able to utilize these sounds.

Q: Tell us about the process of recording the songs ?
Q6: I usually start with a riff or chord progression. Lately, it’s been a drum beat. I’ll mess with it for hours and try to build some semblance of a track, but it always finds a way to be reimagined and revised. I find that a song doesn’t always have the initial outcome I had hoped for; which creates a more interesting track to me. This is the case with most tracks, that as I’m building and inviting new sounds in, the original idea is always changed. Not necessarily clouded or forgotten, just improved upon. This can get challenging, because it feels like there is always something new to add, haha. No track really starts the same. Sometimes, I barely know what I’m even doing, as tracks can take a week up to a month to complete. Taking some time away from them to read, write, or work on another track usually gives me more ideas.

Q. Which new bands do you recommend?
Q7: I would highly recommend Preamp, Vicious Blossom, M Sage, and Naps. Not necessarily new artists, but artists very deserving of recognition. I’ve really been enjoying the new Tourist Kid record and I think that Lali Puna and Dntel are highly underrated. Anything that Melody as Truth has put out is worthwhile.

Q: Which band would you love to made a cover version of?
Q8: I think it would be really cool to make an dreampop version of an American Football/Owen track. Or even to take on The Sundays. I think there are some really cool untapped sounds there. (maybe look for this in the future?)

Q: What are your plans for the future?
Q9: I’ve got my schedule pretty busy with the future. I’m working on a few remixes currently, playing some shows, and recording new music. I have a couple tracks completed for a full length, but I’m not quite sure when it will be available. But for certain, it will be soon and it’s much different than anything that I did on Liminal. I also play guitar for Janedriver and I’m a fulltime student. I’m pretty busy with both of those things, at the moment. That’s okay. I enjoy having things to do.

Q: Any parting words?
Q10: It was truly an honour to be apart of the latest TBTCI compilation and I really appreciate you inviting me to be apart of it! It was wonderful answering your questions, thanks so much!
*
*
*
Thanks