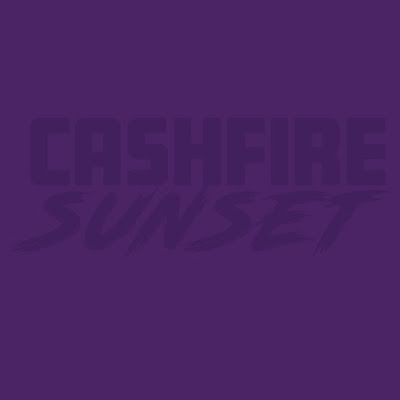 Q. When did Cashifire Sunset begin? Tell us about the history...
We began working on Cashfire Sunset in early 2017.

I was working on a band with a friend of mine before that in which I was playing noisy guitars and writing noisy songs, but in 2017 I broke my arm in January and broke 3 fingers in March (both were skateboarding injuries). Had to take break from music.

One day I was hanging out with Ray Chi at a neighborhood concert when he casually commented that he wanted to start playing music regularly again. I still couldn’t play guitar for a while due to injuries so I bought a Farfisa Fast 3 organ in Chicago for $300 and a Carvin full stack and we started finding other musicians to work with.

Raj’r Taim (bass) and Sam Lozoff (guitar) are long time friends of mine who were in the zone to play at the perfect time.

It takes so long to get a band going...by the time we had the right people and the right songs together I could play guitar again. So there are 2 Farfisa songs on the album from the broken bones time.

I really wanted to do a loud band. I think we are pretty loud.

Q: Who are your influences?
I feel like, in our case, when you bring together all of the preferences, limitations, and personalities of the band members, you arrive at the sound automatically.

But there are definitely influences...

Q. How do you feel playing live?
Playing live is great. We have a lot of amplifiers, so it’s easy to get engulfed in sound, which is the main goal I suppose.

Q. How do you describe Cashfire Sunset´s sounds?
Beach distortion with cathedral reverb.

Q: Tell us about the process of recording the songs ?
The goal was to have it very loud and washed out. Whenever possible I oversimplify things in the recording process. Also we recorded two songs at a time, instead of doing the tracking for one instrument for every song on the album at once. So I would re-setup the drum sound everyday. Re-mic the amps everyday. It’s more like recording a series of singles that way, and everyone can stay in the vibe of a specific song until it’s done.

I record the drums with only one full frequency microphone. It’s very liberating to commit to a sound right away. This approach favors the kick, snare, and rack toms and makes the cymbals quieter and more in the background. On a couple of songs we overdubbed some cymbals.

Bass was recorded with a Shure Beta kick drum mic about 20 inches from the speaker.

Guitars were recorded with large diaphragm condenser and a dynamic mic right next to each other. Sam uses an Ampeg ss140-c and an Ampeg ss70 which are solid state amps, and I use a Carvin x100-b tube full stack. I really like how the 2 guitars layer together with these amps. Some of the guitar melodies I record thru a Zvex Fuzz Factory and then direct line in with no amp. This lets it cut through in a special way with all of the distortion already in there from every angle.

Drums and bass are recorded playing together. We will never use a click track. Let the tempo drift and be free!

Then it’s vocals which are recorded in a standard way but then adding several different reverbs and echoes. And then layering harmonies.

At the end I master it with a lot of compression. Cheap digital compression. I roll off lots of high end and low end. I’m really interested in the texture of the music sounding cheap and nearly broken, as if it were played through faulty equipment or a terrible stereo system. I love the worst formats. MP3s and cassette tapes and walkmans and phone speakers take away all of the “beautiful frequencies”, and to me this is a new and interesting sound that I want to embrace. I want it to be just the essence of the song coming through a polluted haze. Like a Beatles cassette in a battery powered tape player when the batteries are almost dead. I like that. I’m trying to achieve that. I couldn’t care less if someone’s music was recorded through a Neve 8078 console with a Neumann U67 mic to 2 inch tape. Let that stuff die already. Music should be cheap, sound cheap, act cheap.

Q. Which new bands do you recommend?
I recommend Gallery Night from Milwaukee USA.

Q: Which band would you love to made a cover version of?
My latest fantasy is to try to do a very loud and lazy version of “Crocodile Rock” by Elton John, but I don’t know if I can get it to sound comfortable enough to feel ok about it. And even though it may amuse me to take that song out of its context and place it in a different one, I’m not sure it’ll be a great decision...we’ll try it in rehearsal and see I suppose.

But I’m really not a good enough singer to do covers I think...it always just sounds forced and disappointing to me.

Q: What are your plans for the future?
We are happy to be a band and to be playing shows. It doesn’t get better than that. It’s the best to have the opportunity to play music.

Q: Any parting words?
Thank you so much for allowing me to ramble on about rock n roll music. I usually just talk to myself about it while I’m driving, so this is a great pleasure. And thank you for listening to our songs. We hope to see everyone out there soon.
*
*
*
Thanks