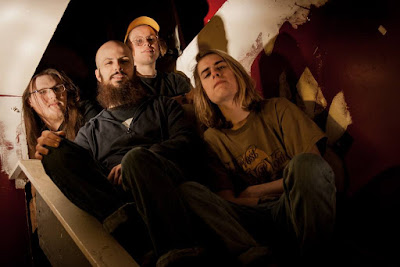 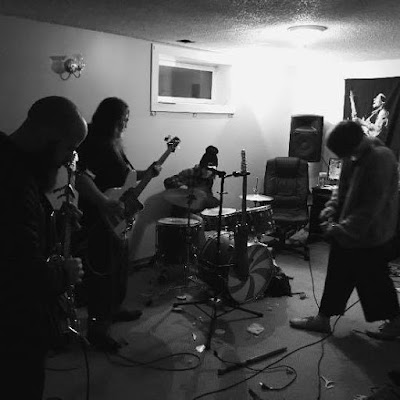 It’s actually funny how SDE started. Chad and I (J) moved into a house together without really knowing each other. We had played in a couple different bands before finally deciding to work together as one. J brought in his best bud Dahli to rock the kit and Chad brought his partner in crime Eric to play the synth. We had a couple different line up changes with some different faces before finally settling with just the four of us. It just made sense being how close we are to work as one so Eric moved to the bass to round out our lineup

Q: Who are your influences?
A: Our general love for music has created so many diverse influences for our music so it’s really hard to say all of them so I will just name a couple major influences: Nirvana, Sonic Youth, Tame Impala, DIIV, The Beatles, Joy Division, Patto, Neil Young, Jimi Hendrix, etc...

Q. Make a list of 5 albuns of all time…
A: We decided to just name a record each that we hold on to dearly
OK Computer - Radiohead (Chad’s Choice)
Currents - Tame Impala (Eric’s Choice)
Unknown Pleasures - Joy Division (Dal’s Choice)
In Utero - Nirvana (J’s Choice)
And ANY Beatles record, haha.

Q. How do you describe Sunny Day Encore´s sounds?
A: We have a very unique sound. The guitars drown in reverb and delay, give a very shimmery and dreamy tone. Dal’s ability to lay down some nasty fills add some spice mixed with Eric’s bumping baselines gives us a fast, entertaining element which all comes together as an absolute treat to the ears.


Q: Tell us about the process of recording the songs?
A: Like most new bands with little income, we had to do everything ourselves. Our guitarist, Chad, had been recording and producing his own songs the last few years, so we decided to let him take the lead and record our first album. The point was to get our music out there as soon as possible and to start building a fan base, so we weren't really worried about quality (even though the album turned out pretty close to how we were imagining it). We were still in the process of writing nearly half of the songs on the album when we first began recording and it ended up taking nearly 9 months from tracking to the final masters. The process, though long, was pretty simple. We recorded everything in our basement living room, tracking each part individually.

Some days we'd record a few takes and then we'd leave Chad at it and he would come back with a quick mix so we could all listen in his car. Those were probably the best times during the recording process and really brought us closer together. We decided to record the drums live rather than tracking each drum separately, which gave Dahli the chance to keep experimenting instead of coming back to previous recorded drum parts that he'd have to match. It's also worth mentioning that Chad and I both have a need to record our entire guitar part in one take, instead of tracking verses/choruses/bridges separately. It gives the album a sense of live performance, but its still grounded in a more studio-like environment. It was an incredible learning experience and such a good time that we already “might” be working on new music.

Q. Which new bands do you recommend?
A: There is a lot of great bands out there with immense talent so we felt the need to list a couple local bands or bands that we have played with that deserve a lot of credit like The Garry’s, Apollo Suns and Brodie Moniker.

Q: Which band would you love to make a cover version of?
A: Love this question. SDE was originally formed so that I (J) could play Sonic Youth’s Incinerate with a live band. We haven’t quite gotten around to it but who knows, we might get around to it one day.

Q: What are your plans for the future?
A: We actually are just in the midst of really setting down our game plan. I know we have a couple really fun shows coming up but that’s all I can really tell you at this point in time but... don’t be surprised if something comes up or comes out! Just gotta follow us on social media to find out!

Q: Any parting words?
A: Obviously a big shout out to our boy Renato for reaching out and caring enough to hear what we have to say. Make sure to give us a follow on Facebook or Instagram and make sure to check out the tunes on Spotify, Apple Music or any other major streaming service!
*
*
*
Thanks