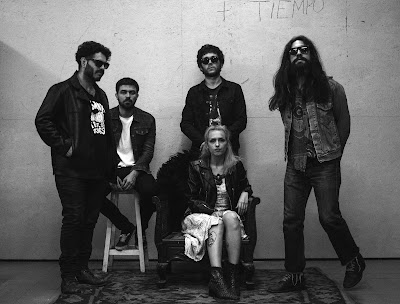 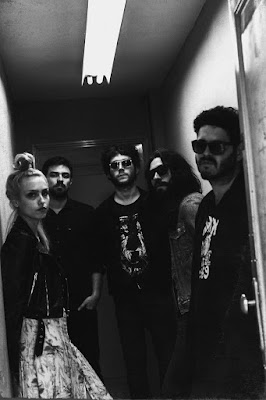 Q. When did Familia de Lobos begin? Tell us about the history…
It began something like 3 years ago, in my apartment Eric (voice and guitar) and I (charly, guitar) we used to play together before, many years ago. None of us were playing at that time and decided to get together again. By that time we were listening to other music and bands, so we spent some time forming and shaping our sound. We wanted to do something different from what we used to play and from what we listened in bands in Argentina, but separated from international influences. We used to live something like 1:30 hour away from each other, so we settled fixed days for working, as if we were in an academy or something like that. We tried several formations, and we couldn't get a band together for several reasons, so we started programming bases and experimenting with other ways of composing, trying to play live with less musicians. In between we started trying other instruments, andean precolumbinian instruments, in a very instinctive way, bombo legüero, quenas, sikus, percussive instruments, and little by little started forming that sound that we were looking for, wanting to sound like a rock band but from Argentina, with south american sounds. Argentina has a very rich rock history, but we always had the feeling that everybody tended to look outside, instead of looking in, we started looking in. Once we had that sound in mind and some songs, we went to the studio to record an album and having the material to look for musicians and showing what we had. Mari Anselmo (one of our percussionists) joined the band in between, and slowly some friends join aswell, Andy Merlo in synth and sampler, and Matias Blanco also in percussion.

Q. How do you feel playing live?
We are expecting that with Familia de Lobos, since the band was finally formed something like 3 months ago. We recorded the album without having a full band together, so we are very anxious, and looking forward to our first gig. We played live in the past, and one of the reasons we started doing music again is because we couldn’t stand seeing live bands without having that feeling of wanting to be up there playing, so I think that is the best answer.


Q. How would you describe Familia de Lobos sounds?
Psychedelic garage mambo (Made in argentina)

Q: Tell us about the process of recording the songs ?
Started with some demos, homemade demos, then went to Electric Chesterland, a studio in Buenos Aires and recorded them propperly, and with better gear. Everything went well until that, mixing it was a nightmare, as we were three at that time, we didn’t had all the musicians, so we recorded lots of tracks “just in case”. The process that came after was incredibly long, but we learned a lot.

Q: Which band would you love to made a cover version of?
We are working on some Vox Dei tracks, definitly we will do “Moises” or “Genesis”, maybe both!

Q: What are your plans for the future?
Playing live this album, as much as we can, and we are starting producing our second album, probably we will release some songs this year, maybe two.