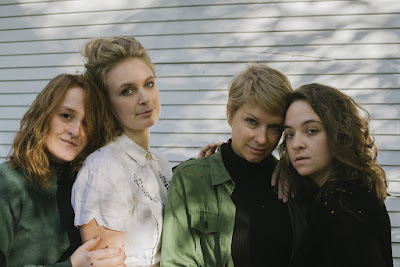 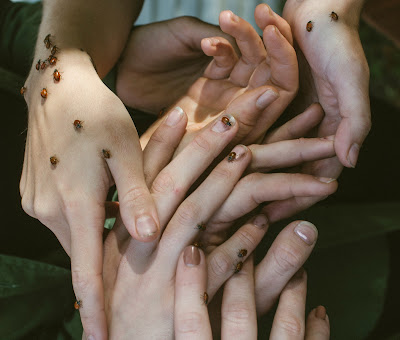 Q. When did Frankie & Myrrh begin? Tell us about the history...
A: Frankie & Myrrh dove into a whirlwind of noise last April when I (Al-vocals and guitar) hopped on a bill at a scrappy basement show on the west side of town and convinced Leah (drums) to accompany her. Leah had been playing drums for two weeks at that point and we had less than three days to teach her the songs. At this point we had no name, no music, no expectation and were just a duo. I clearly remember gripping a piece of scrap paper with all of my lyrics on it between my hands as I drove across town, trying to drill them into my brain moments before my set. We sluggishly loaded into the basement, too proud to let any guys help with our gear - let me tell you, lugging a fender deluxe down a set of unfinished stairs into a Michigan basement will cause any human to doubt their sanity. We played the show to a crowd of maybe six people, it was scrappy and raw - two gals letting loose to anyone who would listen. One human in particular listened and listened well, she (Vanessa - lead guitar) approached us after the show with excitement and in a scattered frenzy exclaimed that she could play bass for us (but had never played bass before!) and wanted to be apart of our band. I was sold, none of us knew what we were doing. I dug my old Harmony bass out of my closet, picked up an amp from a friend and scheduled a practice for her to come play with us. Ness picked up a guitar while we were setting up the bass and we realized that this girl had some gems that came out in the form of licks. We quickly came to an agreement that she was beyond fit for playing guitar instead of bass. Three of the four of us help produce a DIY music festival in Grand Rapids called Lamplight and that's how we met Danielle. We all knew immediately that she was the most organized individuals we'd come across but none of us knew she was a master bassist on top of being a rad lady! When things came together we all realized that what we have is something insanely unique and we fell in love with each other. I have realized in recent days how unique it is to start a band of musicians who have been creating for a while but never played in a band before. The lack of structure is what allowed us to write in the free form collaborative way that we do. Everyone writes their individual parts after an idea in the form of a riff, lick or concept has been placed on the table. This group has been fulled with power and the strength of being women who are fearlessly approaching a style of music standardly known to be produced by men. As time has slipped by, Leah has started to long to settle down a little bit more - the concept of family and focus finally becoming her present. Our hearts are heavy to see her go but she will always be that key human form of glue that helped stick this band together. With much love and mutual agreement, she stepped down from the band and we have found a new member to join us named Jennifer. A hot rod on the drums and overall electric lady, she fit right into our mess of giggles, riffs and screams. We first met her when she picked up a gig playing on an all female lineup with a local creator named Jes Kramer. It was drummer love at first sight and pretty quickly after we met, she gave us her word that she was in. She plays heavy with a surf tone and incredible rhythm, our sound is developing and we are all eager to write more and see what the future holds.

Q: Who are your influences?
A: As a whole we listen to an eclectic group of music but in no particular order it comes down to: Saint Vincent, CAN, The Velvet Underground, Radiohead, Real Estate, Divino Nino.

Q. Make a list of 5 albuns of all time…
A: This is too difficult...
Dots and Loops by Stereolab,
Edgar Winter's White Trash,
Kid A by Radiohead,
Marry Me and Actor by Saint Vincent,
Ziggy Stardust by Bowie

....The more we think about it, the more lost we become.

Q. How do you feel playing live?
A: The past few shows have been the most fun ones out of the large handful we've played. The few before that had been sweaty and difficult as we were learning how to perform, what to ask for sonally and how to roll with mistakes. We're learning how to envelop each others energy and communication on a stage and in front of a crowd while staying present enough to stay in the correct place. When we stepped onto the stage at our last show we felt like the ground beneath us fell away and that the electricity from everyone's energy pulsed through us and created a web of happiness. It was incredible and addicting, all we want to do now is perform.


Q. How do you describe Frankie & Myrrh´s sounds?
A: Oof. A musicians favorite question, we sway from sultry kraut groove to dream pop with hints of psych. Recently we have gotten a lot of remarks classifying us as a mixture of surf and shoe-gaze. We have such a wide variety of sound that there is nothing completely solidified yet - we're curious to hear what you think.

Q: Tell us about the process of recording the songs ?
A: Recording was eye opening for us. We recorded in the Space Lab and DIY basement studio with Austin Kane a huge supporter and friend to all of us. Another pal Caleb Richards came in from Reno and helped with the production and overall vibe of the experience. It was challenging as we'd never played to a click and were all used to disappearing into the music. Recording in a home studio was perfect for us because we worked hard and long hours then surfaced to cook and laugh together when our hanger overcame. Caleb and Austin stuck it through with us and we were all beyond proud of each other for what we contributed.

Q. Which new bands do you recommend?
A: We have not been able to stop listening to Crumb, Combo Chimbata, Divino Nino, King Gizzard and the Lizard Wizard and the regulars like Frank Ocean. The groovier the bass, the more we feel the vibe.

Q: Which band would you love to made a cover version of?
A: A cover of any band....No Doubt - No Doubt. Or maybe Fugazi. TLC would be great too, you know this is making us reconsider the musical path we chose...

Q: What are your plans for the future?
A: Our plans for the future are still developing and we are letting things work out in the way life allows them too. As far as the present, we are picking up the pace of booking and amount of shows we are playing which feels incredible. All of us are new to playing shows so the experience and energy of playing in front of other beings fills us with a new form of adrenaline. We would eventually like to put out a full length and hit the road. Where? That has yet to be decided but we are open to all forms of possibility. We will see what the future brings us, this is the most exciting point of being in a band where pretty much anything could shift or change and we will roll with it. The idea of collaborating with other creators and learning from general human connection is what we long for. Where ever we end up, the power of this project will keep us rolling.

Q: Any parting words?
A: We have one rule as a band, and its "No sorries" As creative types, as women and as musicians we find ourselves apologizing for our actions when there is absolutely nothing incorrect about them. If there is one thing we can pass along it would be that you should always channel your confidence in what you are creating. Art is a powerful form of communication and to be soft with yourself and those who you create with allows a gate to open that could otherwise prevent pure ideas. Don't be afraid to be you and to feel what you need to, we all get a little scared of our own work but that is the beauty of sharing it with other people - they can help you grow with them. Collaboration is key in this modern word, and we truly believe that it us what makes music the powerful entity that it is.
*
*
*
Thanks