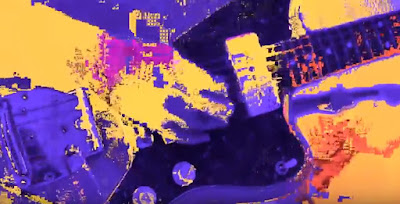 Blasphemy is a plea for someone to open up and trust that you'll accept them, no matter how weird or unlovable they think they are. I feel like the EPs are quite up-tempo and pop-focussed, while Blasphemy was the result of me wanting to write something darker and a bit more slow burning. An early version of Blasphemy appeared on a The Blog That Celebrates Itself compilation, but I wanted to re-record it and include it on the album because it was thematically from the same place of the mind as the rest of the songs on the album. We’ve been opening shows with Blasphemy for a while now – the way the lead section hits after the deceptively quiet intro is a fun way to start a set.

Cruel was written after Emily [Retsas, bass] alerted me to the fact that that the album was becoming a very sombre, mid-tempo affair. Often when writing I build songs down from the top down, starting with melody and guitar chords. Cruel was built from the rhythm section up – the driving beat with the persistent kick pattern dictated the direction that the rest of the instruments took. I think the lyrics speak for themselves in this one, there's no grand metaphor or anything. This song is special for the fact that it features Emily on bass (my favourite bass line on the album is in this bridge), a mind-melting solo by Brodie [Brummer, Flyying Colours], both of which I could have never come up with myself.

Fall Apart is about that paralysing fear that comes from feeling responsible for another person's actions and the feeling that things out of your control are directly your fault, which is really just a form of self-important paranoia. Most wouldn’t know, but I’ve been living with obsessive compulsive disorder for as long as I can remember and, while I’ve touched on it lyrically before, this song probably contains the most direct references to my thought patterns. This song is different in that it started with a bass guitar part (that can be heard alone in the intro), which is the first time I’ve started this way. The feel of the rest of the song was dictated by the rhythm of this bass line. I tried to give the structure a somewhat fragmented feel, as the song jumps between parts, not lingering on any section for too long. I'm really happy with how the vocal harmonies turned out on this song.

Horizon. This is the second version of Horizon. The first version, which appeared on the first recording of the album (before I scrapped it and re-recorded everything) was written before the album's direction had taken shape. It was much lighter and featured a Hal Blaine 'Be My Baby' style drum beat. I couldn't find a place for it to sit in the track list so I rewrote it. I had just discovered the band Title Fight and was digging the chorus guitar that was all over Hyperview, which is what influenced the main guitar line that carries the song. Lyrically, Horizon is about the hole that is left in your life when someone just leaves suddenly and unexpectedly. Bonus fact: there is a discordant note just before the outro/chorus thing. That was a mistake in the performance, but when I listened back to it, I really liked how jarring and dark it sounded. Happy accidents.

Hearts Grow Dull was my attempt to double down on the quiet/loud dynamic that I played with in the EPs. It's also in an annoying tuning that none of the other songs are in. I wrote the lyrics for this song not long after Dead Air was released. A relationship I was in had just burned out after attempting to adjust to a long distance arrangement, which inspired the seemed-clever-at-the-time play on the phrase "distance makes the heart grow fond". This song cemented in my mind the direction I wanted to take with the LP: a bit heavier, darker and more of myself personally in the lyrics. A lot of the songs follow on from Hearts Grow Dull thematically with the album loosely exploring distance in relationships, mental and/or geographical.

Without You first appeared on the Dead Air EP and was always one of my favourites so I felt like it deserved to have its waveform smooshed into vinyl. This version is entirely re-recorded. I wanted the lyrics to be a bit more audible this time, as they were obscured under a blur of delay, chorus and reverb on the EP. I only noticed recently, having gone back to listen to the original version, that I inadvertently changed a lyrics in the second verse: "Feel like I'm losing time" has become "feel like you're losing time". I think I often default to the second-person "you" to remove myself from sensitive subject matter. It's kind of a lyrical self defence, projecting onto a You character to create a comfortable personal distance. I'm not sure if that was the case here, but I found it amusing.


Still Life is probably the most positive song on the album both lyrically and musically. When writing lyrics, I generally lean to the side of being matter-of-fact and linear, almost conversational. I admire lyricists that can create a feeling or communicate the broad strokes of an emotion with more abstract language and structure. That sort of free-form writing doesn’t come easy to me, but I think Still Life’s is the closest I’ve come to writing in this way. I like the ambiguity in this one, so won’t ruin it with specifics. Musically this one started a lot more distorted – almost a Silversun Pickups type sound – but I wanted to try something different and lay off the distortion for a bit in the verses and lead parts. Though it still creeps in towards the end.

Drive, like Horizon, started off as an entirely different sounding song. I'm not a confident, nor prolific lyricist so, when I write something that doesn't make me cringe uncontrollably, I feel like I need to find it a place, regardless of how many rewrites it takes. The first version of Drive had a very Beach House feel to it – a lot of guitar wash, very little distortion, cascading vocals. I liked it as a standalone song, but it didn't really fit anywhere. I was trawling through old Blush demos that were never given lyrics and found one called "Quiet Loud in C# (new one)" (I have folders and folders of ideas named this way) which just instantly fit. I remember the frustration of being so excited that I'd found the right home for the lyrics but it was raining really heavily and any vocal takes I did were covered in the sound of rain on corrugated iron. I like the sense of space Drive affords the second half of the album, it kind of meanders along at its own pace.

The Week That Never Was started as a dinky little song on acoustic guitar that I was convinced wouldn't work for Blush Response but, as with a lot of these songs, it was drawn to its place in the album through the lyrics. The first attempt I had at turning it into a Blush song was pretty much just me trying to write my own When The Sun Hits, but it felt forced and didn't fit with where I thought the lyrics belonged so I started again. After another failed attempt, I decided to try the original chord progression and to my surprise it sounded right as a jangly dream pop song, so I just built it up from the original chords and structure. This song continues my habit of writing happy sounding music for dark subject matter. The lyrics focus around a week, several years ago, where my girlfriend-at-the-time's life fell apart. I felt so terrified and helpless at the time and I'll forever be in awe of the strength she showed pulling herself out of the mire.

Safe and Sound is probably the most important song on the album to me. Along with Hearts Grow Dull, it typifies the quiet/loud dynamic I wanted to achieve with this album. It was a strange song to write, though. It was around two years after I wrote Hearts Grow Dull and I found myself in a new relationship that I was fearing was going to turn long distance and end similar to the last. I wrote the lyrics almost preempting my feelings should things turn out the way I feared. Turns out the song was unnervingly accurate, both in the sequence of events and in the way it would leave me feeling. While Hearts Grow Dull focuses on the guilt of growing weary in a long distance relationship, and Horizon on the hurt and anger of feeling left behind, I think Safe and Sound is a hopeful, reflective song.
*
*
*
Thanks