Guest Directors, "Captured in the Light" - Track by Track 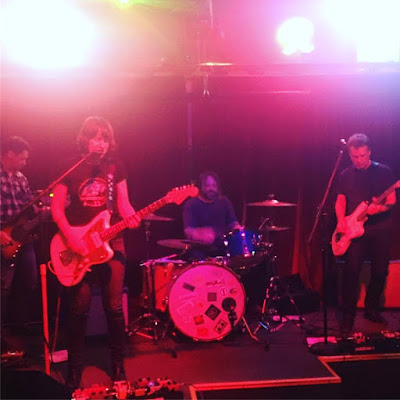 
"We started recording this EP a full year before the release date, almost to the day. It was originally going to be a 5-song EP slated for Fall of 2017, but there was a series of frustrating setbacks with technical issues and scheduling that caused that plan to change. At the same time we were also looking for a new bass player because Steve was moving. We ended up tracking things at three different studios, and then mixing at two different studios. It took so long that we released two of the songs last year as a digital-only “single” to feel like we were making progress. It’s really good to have this completed at last. We already have studio time booked for the next set of songs!" - Julie / Gary

Day Follows Day:
[jd] There are recordings of this song in one form or another that go back a couple of years. We kept sort of rearranging the parts, but it wasn’t until we fell into the long middle jam one day that things really came together. When we’re writing we do a lot of open-ended versions and just kind of see what happens. In this case (and the same with the song Believe it All from our first EP), we hit on something magical and then reverse-engineered it to make it reproducible. I like the harmony singing we do in the verses on this song. And I love the main drum part on this so much - it really elevates the song into something special.

[gt] What started out as a folky type verse/chorus idea took a left turn primarily thanks to our drummer Rian. What he came up with was really inspiring and once we began to jam it a bit this whole other hypnotic guitar section just took off plus jd and I got to sing the verses together... a first

Forks:
[jd] This song had a funny creation as the result of a double mis-hearing. I brought in a guitar riff, and we jammed on it a bit at practice, and then later that week Gary sent me his part for it. But he misheard or mis-remembered my part, so it didn’t really work - but I really liked what he wrote so I ended up modifying mine. He sent an additional part at the same time, but I misheard *his* new part as being two distinct parts instead of one, so I wrote two completely different things to go with it. It was super confusing when we tried to put it all together! But ultimately we got things sorted out. We had an intro for this, and we even recorded it, but then we ended up scrapping it during mixing.

[gt] A lush-sounding concise psych thing that revealed itself, backwards guitar imagined and recorded on the spot

[jd] This is one of those songs where the first line just came to me out of nowhere, and then I had to figure out what it meant and what the song was going to be about. In the simplest sense, this is a breakup song.

Spinning Round:
[jd] This is actually one of our oldest songs, at least the main idea. It took a while to build out the structure. I personally had a lot of trouble settling on what I wanted to play, until we actually got in the studio and I had to make some decisions. Sometimes a situation that forces you to make choices can make the choices clearer, and I wound up really happy with the final result.

[jd] Gary added those e-bow tracks at the beginning, and I like it so much that I try to replicate the feel with some intro feedback when we play this live.

El Rey:
[jd] I don’t do much solo songwriting, but I’d had this riff kicking around forever and would noodle with it from time to time. One day a vocal melody just popped out at me, and I ended up bringing the song in to the band in nearly-complete form. As a group we ended up modifying the arrangement a bit.

I’ve got a track of feedback through a whole bunch of effects pedals that runs through almost the entire song. My inspiration for that was Wye Oak’s “Too Right”, although it sounds nothing like that.

I think this sounds really different from when we play it live - live it almost has a grunge feel, and I sing it a lot more shouty. We tried approaching it with more dynamics in the recording.