Once in Awhile with Sheath - An Interview 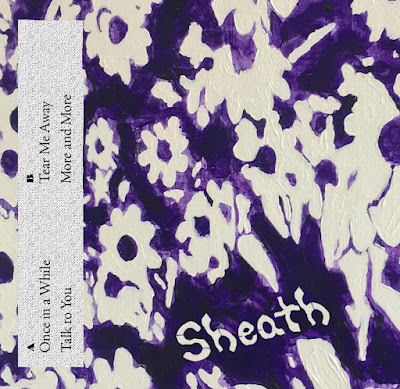 
Q. When did Sheath begin? Tell us about the history...
The band was a slow birth. The demo songs were written and recorded around the end of 2016, just out of the blue, and I spent the better half of a year looking for people to play with me. Then I found a drummer, we connected over a funny crust punk freaking out, and the other members came all at once kind of randomly. We just started playing shows this year, and now we have a new record to make.

Q: Who are your influences?
Musically Kevin Shields, Joni Mitchell, and a lot of dance music, garage and jungle mostly. That, and anything that kinda moves me be it a movie or a painting or a line in a book or person saying something funny when ordering a coffee. I'm never finishing what i start watching, listening, or reading because when i get the compulsion to create i'm kinda manic until i've coughed up something.

Q. Make a list of 5 albuns of all time…
This is sort of hard for me. I don't really think of it in terms of list since my mind seems to change so often. Right now five albums I've listened to a lot are:
Connan Mockasin and Dev Hynes - Myths 001
Paramore- After Laughter
Joni Mitchell-Hejira
Soft Hair's LP
Renegate- Terrorist
Equiknoxx - Colon Man

Q. How do you feel playing live?
I love playing in our practice space. Live is difficult w sampling and our unorthodox tunings but we're gradually getting better.

Q: Tell us about the process of recording the songs ?
It's the most difficult part for me since i record on my own. Like at this point in time the collection of songs are all finished and have very definite ideas about what each element will sound like the hard part comes not in visualizing the idea but closing the gap between what i envision the whole album to be and what my own limitations in terms of recording will tend to be. i sometimes feel like charlie chaplin.

Q. Which new bands do you recommend?
People should check out Rope Rider out of Santa Barbara, Sorespot from Chicago, and Judge Judy & Executioner also from Chicago.

Q: Which band would you love to made a cover version of?
Maybe something by Public Image or the road by best coast

Q: What are your plans for the future?
Officially we plan to have an EP out by the summer, perhaps a small tour as well. Unofficially to write more, record more, tour, and keep expiermenting with musical ideas while not crossing into making experimental music lol.

Q: Any parting words?
Thank you for reaching out!
*
*
*
Thanks