Bedroom Paradise with Lust - An Interview 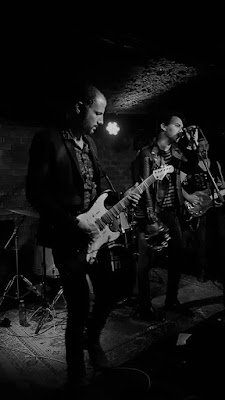 
Q. When did Lust begin? Tell us about the history...
They say 2 is always better than 1. That's why we - Asaf Sandhaus and Asaf Cohen, long time friends decided to lock ourselves up in the studio for a large chunk of 2017 and came up with this band called 'lust'. After writing and playing on all the instruments on the album with the vocals and production on Sandhau we started touring Israel with the help of Maya Tal on drums, Sharon Kvatinsky - Keys and Ypssi Almagor - Bass. of Sandhaus..

Q: Who are your influences?
Influences - Cohen: My bloody Valentine is a huge influnece on my guitar sound, sonic youth and the Cure too

Q. How do you feel playing live?
We have a special bond whitin our band, the songs get another meaning when we play it to our audience, it is a bit like a religious experience


Q. How do you describe Lust sounds?
We mix electronic drums with live guitars and lyrics , the sounds are dreamy and are meant to aspire our listeners to take a walk on the dark side

Q: Tell us about the process of recording the songs ?
Our sounds is based in the 80's and 90's but mixed with todays production techniques to give it a 2018 touch and feel. We produced the album in Sandhaus's studio in Tel Aviv where we played on all the instruments. Diamonds started with a guitar riff then in the studio Bass and electronic drums, were added. The lyrics and vocals where done at the end.after the music was ready. Mixing and Mastering was also done in the studio by Sandhaus

Q. Which new bands do you recommend?
We like Diiv, TigerCub,, Emily Nichols, Fufanu

Q: Which band would you love to made a cover version of?
Betty Davis eyes by Kim Carnes

Q: What are your plans for the future?
We are curently touring Israel and will have an album relase party in May followed by a European tour where we will shop for a record label and booking agencies..
*
*
*
Thanks