Year of the Field Mouse with Hollow Sidewalks - An Interview 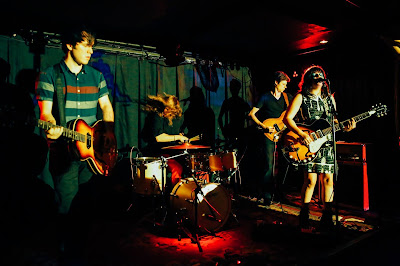 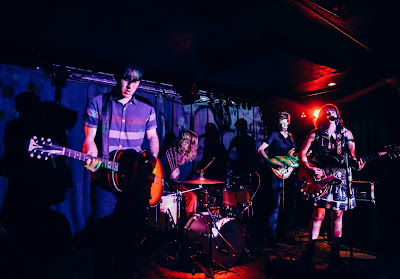 Q. When did Hollow Sidewalks start? Tell us about the history...
I had moved back to Portland in May of 2013, after a brief hiatus back to my hometown of Chicago. I had always wanted to have a band of my own, playing my songs, but had only ever played bass for other people’s projects. I started Hollow Sidewalks while filling in on bass for The Verner Pantons. In fact, the bass player who I replaced sold me the band name for two mushroom chocolates and a round of drinks. I guess we were kind of a Verner Pantons side project back then, in Jan 2014, because Verner Pantons member Eric was drumming and front person Tobias played bass. As things evolved, as people’s schedules and intentions changed, the line-up changed as well. Lead guitarist Nicholas Locasio (ex Hugs) joined and Mori Dinauer (Dandelyons) followed, not long after, on bass. We had a great two years and two albums with Jason "Plucky" Anchondo (The Warlocks/Spindrift) on drums. I had previously worked with Plucky in Hawkeye. After his departure, we didn't take long to bring Doug Ornas (Devy metal/formerly of Grandparents) into the fold. I've been lucky that so many talented people have adapted to my music and been eager to help influence and arrange it.

Q: Who are your influences?
Chronologically, and most notably, The Ramones, the holy trinity of Iggy, Bowie and Lou—Erasure, Depeche Mode, The Cure, Blink 182, Television, just about every "THE" band the aughts threw at us, like Brian Jonestown Massacre and just about every band in their West Coast neo-psych scene. I'm expanding my tastes and revisiting the greats a lot these days. I take influence from a lot of newer Portland bands that I see live but never hear recorded. It's all something to be interpreted.

Q. Make a list of 5 albums of all time…
Too hard to pick five of all time, how about top five of right now:

Q. How do you feel playing live?
I feel a mixed bag of emotions. I space out, I get super focused. I try so hard, but at the same time, I can't let it get stiff. I'm both happy to lead and reluctant to. It's easy to get on stage and do well, it's hard to please myself though. I try not to get to perfectionist about it, but have hefty standards for this band.

Q. How do you describe Hollow Sidewalks sounds?
It's the soundtrack to my diary. I can't stick to one genre. I'm not a genre snob. It's all rock and roll to me. For the sake of categorizing us, our label, and this interview: we are poppy post punk psychedelic music...


Q: Tell us about the process of recording the songs?
I'm not a fan of recording. I demo songs on my phone. We get them super tight, and take three days studio time to bang out ten or so songs at a time. If you can't do it right in three days, move on. Recording is so sterile, I can't take that environment for too long. I'd love to grow out of my aversion to recording, but as long as I'm constantly producing material, I'll feel obligated to document it as I hear it in mind, to the best of my ability.

Q. Which new bands do you recommend?
Depends on what you consider "new". I just saw the Vexations, and they were Vexing. Tele Novella in Austin are doing great things. Feels in LA, Dooms Virginia in SF....to name a few

Q: Which band would you love to made a cover version of?
I don't typically like doing covers but, Nicholas and I want to play "The Origin of Love" by Stephen Trask and John Cameron Mitchell from Hedwig and the Angry Inch.

Q: What are your plans for the future?
We're touring "Year of the Field Mouse" down the west coast in January ‘17. We'll start recording album no. 3 while we're in LA, laying down as many track as we can muster. I'll continue to run our label, High School Records (www.highschool-records.com) and be an artist advocate in that respect. For me, it's all writing, recording, and touring when I'm not busy figuring the ins and outs of vinyl pressing and distribution.

Q: Any parting words?
Thanks for taking the time and the interest! For real. Our attention spans, myself included, are shrinking and it's hard to listen to it all, read it all, know it all—get to it all in general. So thanks! I hope you like our music.
*
*
*
Thanks