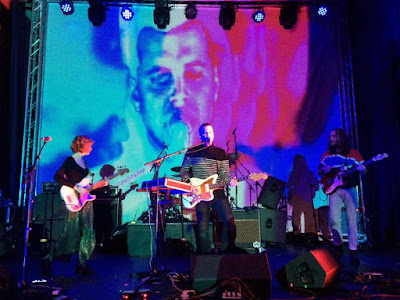 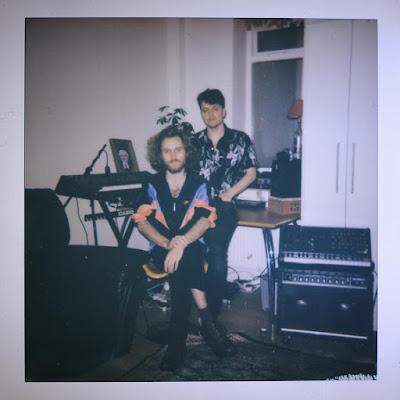 Q. When did La Houle begin? Tell us about the history...
The project started in France, in Angers on summer 2016. We know each other from our previous bands and we decided to start to write some songs together. Jeff comes from jazz and indie rock music, and me, I come from psychedelic rock, post-punk, noise rock music. We are kind of opposite and complementary at the same time. Jeff suggested me to write the lyrics in french, that what i've never did before. It was quite a challenge to mix all those sounds and features, and La Houle appeared in a kind of wavy noisy pop / vaporgaze sound with the vocals put in the front for poetry reasons. For private reasons, we decided to move to London and launch the band there. It was really interesting to start a band who sing in french in UK ahaha. So Clementine and John have joined us for the live and we started to play in the north east london venues during 6 months before the release of our first EP and our first tour overseas.

Q: Who are your influences?
Our influences are plentiful. About the sounds, I would say the 80°S and 90°s shoegaze bands, and 90°S indie pop bands like Stereolab or Broadcast. Yet, we love post-punk or noise band who work on alternative sounds, tunings, harmonies and dissonances, like Sonic Youth, Bailter Space and recently Ulrika Spacek, Corridor.

About the lyrics influences, we love french monuments of poetry like Raimbaud, Beaudelaire... but also darker poet like René Daumal or all these classical and epic greek poet who are Homer or Sophocle or more recently and in a German way Hölderlin. About singers influences, Simon love on one hand the dark and controversials singer like Alain Kan, Lou Reed, Jim Morrison, Daniel Darc and on the other hand the french pop love singer like Françoise Hardy, Etienne Daho, Flavien Berger.

Q. How do you feel playing live?
La Houle in live is a sonic and dreamy experience at the same time. In the studio, there is no limit to the arrangements. In live, we try to keep the essential to offer a more raw and efficient experience to the audience. We try to adapt our sound according to the constraints of the stage and our two countries (France and England), but we always find ourselves playing very hard. The difficulty is to keep the lyrics understandable while this wave of noise that characterise us is on the way ... And wins every time ! ahaha

Q. How do you describe La Houle sounds?
I think Clementine described this quite well a few month ago : There are many ways to bring the sound of the swell into our music, from the maximum volume of our Jazz Chorus, the seagulls of Brighton, the 45 preset of our Midiverb reverb… it’s all about feeling the waves and the constant moves of the tide you know !


Q: Tell us about the process of recording the songs ?
For our last ep's, we just recorded in the Jeff's home studio (his bedroom actually), just me and Jeff, and clementine for the vocals. It's totally DIY for the moment, with our own gears, with no money (the same for the music videos as well) ! We are working on our next album and, this time, we would like to record in a proper studio, we will see !..

Q. Which new bands do you recommend?
There are too many bands in France and in UK which are totally amazing ! You should listen to the french shoegaze collectives with some cool bands like Tapeworms, Des Roses or T/O . We are also in the french underground collective called "La Souterraine" which release our second EP, with friends bands like Rémi Parson, LuneApache or Requin Chagrin. We recommend to have a look on the releases of our record label "Beko Disques" with a lot of great bands too, like Djokovic, Lesneu, Tropique Noir from Brittany. We love also bands from our hometown with a very active music scene, like San Carol, Vedett, Big Wool, The Blind Suns, Sheraf. Jeff is a big fan of the brighton psych band Strange Cages, the uncategorizable GANG from Margate and Snapped Ankles from East London !!

Q: Which band would you love to made a cover version of?
There are too many bands we love and we would like to covered. The covering it's a difficult exercise and dangereous, because you have to surprise, more than your own song... We talked about doing a cover of Françoise Hardy, or I would like a french cover of Street Hassle of Lou Reed... that's could be amazing, innit ? Or a french cover of Parquet Courts, I really love their lyrics, so protesting ! It's all depend if we love the lyrics, you know.

We already made a cover of the Donovan song "Colours". It's like your lying on your bed with your love the morning after an acid party ! ahaha

Q: What are your plans for the future?
We've just released our first album called "Première Vague" on Beko Disques (https://beko.bandcamp.com/album/beko-237-la-houle-premi-re-vague), and finished a tour in UK with Julien Gasc (Aquaserges, Stereolab). So we will keep touring with this album during this year and at the same time writing/recording the second one !

Q: Any parting words?
Keep on rockin in the free world kids !
*
*
*
Thanks