Idol Hands with The Malady of Sevendials - An Interview 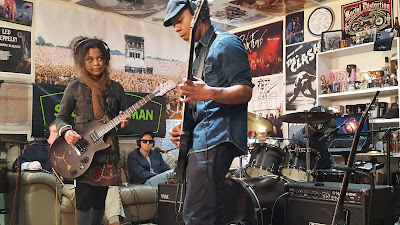 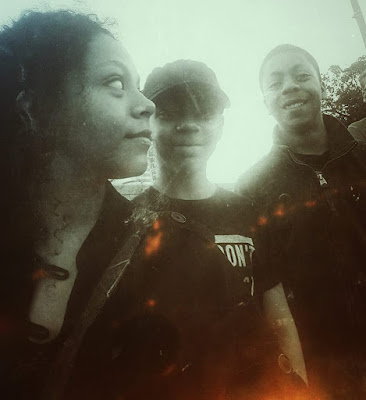 Q. When did The Malady of Sevendials start? Tell us about the history...
Mia: As you may already know, we're siblings, and we started young. In 2010. That summer we decided to try and write songs with the instruments we had just for fun. I didn't work, but we became interested in the idea of writing music. Our parents took notice and offered to get us some proper instruments.

We never learned how to read music. We figured it would take too long and make things too technical and unfun. We still do everything purely based on what sounds good to us and learned our instruments as we wrote our songs. It didn't take us long to find our sound. We're all pretty much on the same page as to what it is we want to hear. Our first show was at the Vera Project in Seattle in 2011. I was 14, Darius was 13, and Damien was 8. It was nerve racking! We had only played for one or two friends outside our family before then, so we really had no idea how people were going to respond. But it went well. Mind you, we had absolutely no stage presence, didn't really know how to engage the audience, had no poise, and didn't know how to do a soundcheck. So it only went as good as a first performance can go. Hands down, Damien did the best out of the three of us during that show.  But you know, you learn as you go. Through all our performances, we hold onto the things that work for us and we learn from the mistakes we make. I think the three of us learn best when we're allowed to make mistakes.

Q: Who are your influences?
Thinking about it honestly, we draw influences from everything around us really. Exciting things, to funny and scary things, to the most mundane. Who specifically? How much time do you have, haha!


Q. How do you feel playing live?
Mia: I know I'm always nervous before any performance. It's not until I get on stage do I feel adrenaline shoot through me which calms me down a bit. I've gotten better with it. Darius and Damien seem to have better nerves than I do. It helps to pretend that no one else is there and we're performing to ourselves. We stop overthinking our music and the mistakes we make. We just play. When we do that, we can perform for anyone.

Darius: I don't talk a lot before a show, mostly because of my nerves. Like Mia, it gets better once I'm on stage because I focus only on the three of us. It's why I don't look at the audience much during the performance.
We set ourselves up on stage so that we can focus on each other and get lost in the music. We have a great time when we're able to do so.

Damien: Yeah, I can't look at the audience at all. I just focus on my drums, the music and these two. But I love being on stage and playing live for people. Just as long as I can't see them.

Q. How do you describe The Malady of Sevendials sounds?
Vulnerable, for sure.

Q: Tell us about the process of recording the songs?
We've always wanted to make sure our recordings capture our live sound as much as possible. We admire that honesty when a band's live performance sounds like their album or better. Nowadays, people get caught up in auto tune and they clean up their tracks too much, it ends up sounding like a computer produced the music. As you know it's not easy trying to capture a live sound. We sometimes like to record with all of us playing together at once. We have a lot more fun when we record like that. But we're still experimenting for the best way to record our music and get that live sound that we want, which is the main reason why we haven't released an album yet. It can get frustrating, but we want to make sure we're happy with whatever it is we put out there. And most importantly that it's honest.

Q. Which new bands do you recommend?
Sister Crystals
He Whose Ox is Gored
The Tennis System


Q: Which band would you love to made a cover version of?
As far as covering a song, we would like to cover Garth Brooks: The Dance. We don't really listen to country music, but this song in particular has great lyrics and is something that we can give a more gaze-y sound.

Q: What are your plans for the future?
Well, since we moved to Cincinnati, we would love to go on tour and perform in cities like Pittsburgh, Philadelphia, Nashville, Louisville, New York. All are less than a day's trip from here. Until then, we're gonna keep writing and experimenting with new songs and sounds and just try to make sure we're always growing as a band.

Q: Any parting words?
We hope people enjoy our music as we enjoy making it. And thanks so much for listening and keep in touch.
*
*
*
Thanks