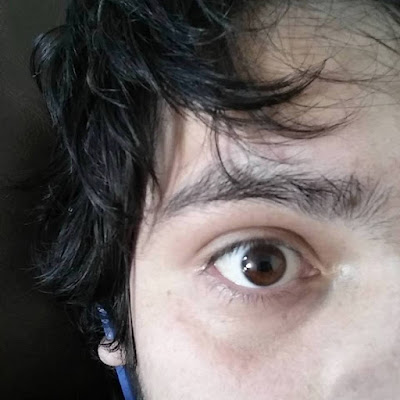 
Q. When did Sonic Vitriol start? Tell us about the history...
A. It all started around 2012, under another name, "Sur le Bord du Monde". I always loved improvisation so the oldest songs I have recorded are mostly improvised folky "sessions" that i made in my room for fun, a friend of mine told me I should upload them and I started to gain interest on recording and audio engineering. I always liked folk music, neo psych and lo fi so i had a lot of kind of psy-folk songs. After a while I gained more interest in dream pop and shoegaze and I started experimenting until Sonic Vitriol got consolidated as what it is today.

Q: Who are your influences?
A. It's really tough for me to choose few influences because I really like a lot of diverse and numerous musical acts. But based on what people tell me it's probably a mixture of post-punk: classics like Joy Division or acts like Human Tetris, a bit of neo psych like The Black Angels, some jangly stuff like Mac DeMarco or Morrissey/Smiths, of course shoegazey acts like slowdive (primarily in the demo i released like 1 or 2 years ago) and MBV; and I think I could add to the mixture things like the No Wave scene, Sonic Youth, hardcore, fastcore and power violence not as in sound but as in aesthetics, focusing on saturating the mind of the listener and experimenting, exploiting certain qualities of music to the almost absurd.

Q. Make a list of 5 albuns of all time…
A another tough one for me but probably (in any order really): Loveless, Souvlaki, In the Aeroplane Over the Sea, Swidden (Blackbird Raum) and People Who Can Eat Other People Are The Luckiest People In The World. I think those are the albums i have listened the most in the las few years, I always come back to them.

Q. How do you feel playing live?
A. I have never really played live as Sonic Vitriol mostly because I don't really have a band to play those songs. It could happen in the future, maybe, but probably it would evolve into something new or different because SV is really kind of a very personal, special proyect to me. I have played small gigs in a thrash core band called Die Fast and sometimes just playing acoustic in anarchist events. I like playing live, it really gives music a very different way of appreciation. I wpuld prefer it over recording, despite all the technical disadvantages.

Q. How do you describe Sonic vitriol sounds?
A. Well, first of all I think it is evolving quickly, because when I compare the new material I am working on with the old one it really does have some contrast but i try to focus on a specific propierty(ies) of a song and just inyect them steroids to make a somewhat mind-raping balls-tripping sound. I probably don't always succeed but that is something i think most songs have in common, apart from improvisation, most of the lead guitars are done on the spot because i feel like it gives it more sincerity, like it is just how I am feeling as i record and not something i learned and practice, it really just comes out from my head with all its mistakes and unique interpretative perks, i probably wouldn't be able to record the exact same track twice because of that, and I feel like that makes every song unique.

Q: Tell us about the process of recording the songs ?
A.well i don't have a drum kit so i write the midi configuration in drum machines like hydrogen 2 and then export it into wavs with a sound bank i like, i then mix the tracks and create a master drum track/folder in studio one. Then i add a guitar track, a bass track (which is just my guitar eqd to bass and then octaved down once) and then i add probably another 3 or 4 guitar tracks, some synths (which i used to do in garageband before my macbook broke) i am using reason or other programs to make the synths and then import them to studio one. Sometimes i make sound experiments and drones to fill the background in ableton live. After that I just tweak the plugins to make it homogeneous or cover something my pedalboard can't handle. Then I mix it, master it a bit, add some main reverb and delay and it's done. To add samples and transition drones or experiments i use audacity, basically i record two songs in one same file and then split it in audacity or add samples when i feel like they should go on top of the whole track

Q. Which new bands do you recommend?
A. Well there's a band from Mexico called sadfields which I have heard but haven't had the chance to listen live and it seems really promising, i really really like what they are doing. More in the already booted bands or more known bands i really like Whirr, it relates to the next question.

Q: Which band would you love to made a cover version of?
A. Really any MBV song. I really wish I could record any of their songs and make it sound even close to the real thing. I really admire Kevin Shields. And also i recorded a cover of toss by whirr but it was an accident, I realized after I was like 3 hours into the recording process that the song I was making was Toss! Haha! So i just decided to see it as a new song that sounds really similar to it and name it Toss as to recognizing it more like a tribute/cover than an entirely new song I came up with.

Q: What are your plans for the future?
A. I really really want to kickstart a DIY label for any willing musicians from the local underground scene (if you could call it like that). I live in Mexico city and I am frexquently exposed to awesome bands without the resources to record professionally. So i want to help them and try to make exposure and recording something more accessible, without selling out. Maybe selling music to help political prisoners.

Q: Any parting words?
A. If you are a musician and are afraid or undecisive about getting your stuff out there just do it. Don't try to sell it desperately like 3/4 of the "musicians" in the internet. Just do real and sincere music even if nobody will like it or listen to it (or you think no one will). The world needs more real music, more real people.
*
*
*
Thanks