Golconda with Aerial View - An Interview 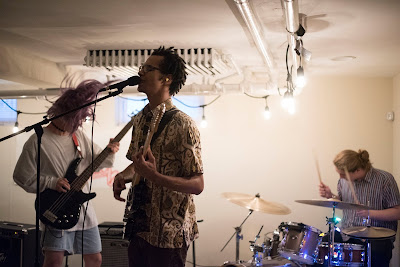 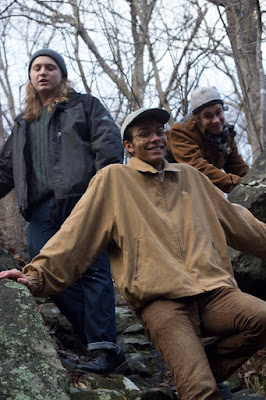 Q. When did Aerial View start? Tell us about the history...
A. Aerial View started as my electronica project during high school. As time went on though, I became more interested in recording more rock oriented stuff. I had been playing guitar since I was 11 or 12, and I could also play some other instruments decently. Back at the beginning of 2014, I released two songs. I played all the instruments and my friend Ananth recorded it. I’m not that big of a fan of doing solo shows, so I started doing live shows with various friends around the same time. Over time, the lineup solidified to include my friends Brendan Brady on drums - he’s played drums on the last 3 Aerial View releases - and Ryan Gregory on bass.

Q: Who are your influences?
A. I, along with the rest of the band, listen to a wide variety of music. My main influences for songwriting and production are Yes, The Shins, Guided by Voices, Swervedriver, The Depreciation Guild, B-52’s, and Keane, to name a few. On ‘Golconda’, I wanted to showcase my love for a wide range of musical styles, while making something that’s still cohesive.

Q. How do you feel playing live?
We have a lot of fun playing live! We try to get the crowd moving as much as possible. In order to do that, we have to be really into it.

Q. How do you describe Aerial View sounds?
A synthesis of harmonies, 7th chords, echoes, and grooves.


Q: Tell us about the process of recording the songs ?
I had written and recorded demos for each song over the past year or so, featuring vocals, guitar, bass, and a smattering of synth drums or badly recorded live drums. A little while before heading to Mobtown studios in Baltimore, I met up with Brendan so he could flesh out drum parts for the songs. Over winter break, we recorded the drums, percussion and some guitars and synths at Mobtown with Mat Leffler-Schulman. Afterwards, I recorded guitar and vocals at my house and at my school (UMBC). It was very freeing to record outside of the studio, because I felt less pressure from time constraints. Mobtown is really nice, but studio time is money. At home, I could just wake up and spend hours just working on various parts. It was nice. After recording was finished, the mixing was finished up at Mobtown, then sent to be mastered at Salt Mastering in New York.

Q. Which new bands do you recommend?
On June 24th, we’re playing a show at 16th street house in DC with some cool friends of ours, Venn and Glume. If you like shoegaze, you’ll definitely like Venn. They just released a dope new EP which you can peep at venn-dc.bandcamp.com. Glume are a tight band from North Plainfield, New Jersey. They do emo/post-hardcore type stuff. You can check them out at glumenj.bandcamp.com/.

Q: Which band would you love to made a cover version of?
I’d like to cover a bunch of songs. If I had to pick one, it would probably be ‘Feel the Pain’ by Dinosaur Jr.

Q: What are your plans for the future?
To keep on keeping on! I love songwriting. I plan to continue working on songs, and get my friends involved because I have a ton of cool musician friends.