Black Monday with Bloodletter - An Interview 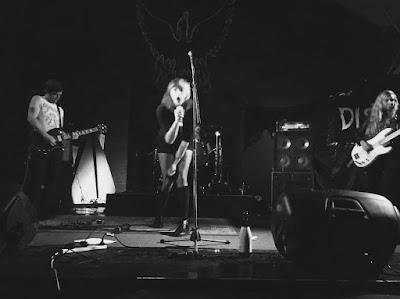 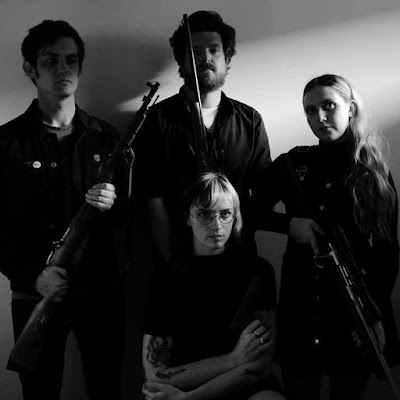 Q. When did Bloodletter start? Tell us about the history…
Lena (vox) and Cat (bass) decided to start a band through fangirling over Siouxsie and the Banshees together. Will (drums) and Ryan (guitar) were later invited to join later as they are old friends and we knew we could balance our abilities together.

Q. Who are your influences?
Lena: I think we're influenced by listening to and playing a broad range of music in our lives - metal, psychedelia, hardcore punk, synthpop. We wanted to take a dark twist from the punk roots, listening to older bands like The Sound, Siouxsie and the Banshees and more current bands such as Rakta and Spectres who also refer to these sounds to make their own.

Q. Make a list of 5 albums of all time…
This is a hard question, I asked each member of the band to list their favourite record:

Ryan: Of the Wand and the Moon - The Lone Descent
Lena: Young Marble Giants - Colossal Youth
Cat: The Sound- From the Lions Mouth
Will: Poison Idea - Feel the Darkness

Q. How do you feel playing live?
Lena: We enjoy playing live, it always feels different, depending on the show as we're not alike to many other bands in Brisbane, so its always about building our own energy when we perform together. I am quite vision impaired and also easily spooked out, so when I sing I like to take my glasses off so that it’s easier for me to face the crowd, which means that I can’t see very far but it’s less scary for me. I’ve been told that since this allows me to give eye contact to the audience, it intensifies the performance.

Q. How do you describe Bloodletter sounds?
Ryan: Like the shifting phases of the moon. I like to think there's a conflict between the catchy and the uncomfortable that has yet to find an equilibrium.


Q. Tell us about the process of recording the songs?
We got our first tracks together and asked Nell Forster to record for us. She’d heard us before and liked what we were doing, and we knew that she would do a good job for us. We were able to lay down the tracks live in a small studio together called Aisle 6 while infecting each other with a little bit of cabin fever. Lena put down her vocals at the end while everyone else ate pizza. She almost boiled cockroach tea in the process - that stunk like hell! No one drank it. After about 6 hours we embellished the tracks using the MicroKorg.

Q. Which new bands do you recommend?
Ryan: Quayde LaHüe

Q. Which band would you love to made a cover version of?
We have a couple of covers under our belt at the moment - Spellbound by Siouxsie and the Banshees, and Doom Town by the Wipers.

Q, What are your plans for the future?
Write more, record more and hopefully tour a little later in the year. We're just getting started

Q. Parting words?
Thanks for listening!
*
*
*
Thanks