Wave Lair with Landing - An Interview 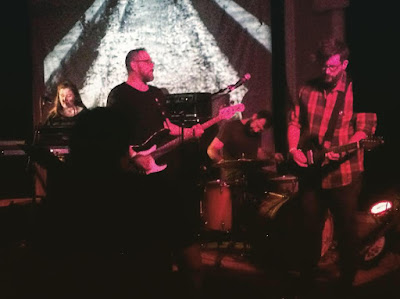 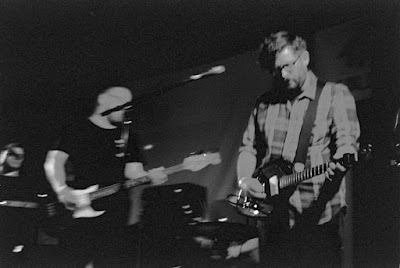 Q. When did Landing start? Tell us about the history...
We started back in 1998 in Connecticut as a recording project and then formed a band when Adrienne and I moved back to Utah (where Adrienne was finishing college). The first lineup was myself, Adrienne, Daron Gardner and Dick Baldwin. Dick left the band in 2004 and we were a three piece until last year when John Miller joined.

Q: Who are your influences?
We're influenced by what we think is cool, weird music. Stuff like Harmonia, Light, Flying Saucer Attack, Cluster, Tar, Cocteau Twins, Fripp/Eno, Neu!, etc. Adrienne and I bonded over a love of original wave shoegaze and The Cure. We try to combine our favorite elements of lots of different genres to make something we hope is new and interesting. At this point, it's not really new (since we've been doing it since '98), but I'm proud of the fact that we don't really fit in any one genre.

Q. Make a list of 5 albuns of all time…
My tastes are changing all the time, but you can't go wrong with these 5 records, in my opinion:
The Cure "Faith",
Cocteau Twins/Harold Budd "The Moon and the Melodies",
Harmonia "Musik Von Harmonia",
Spacemen 3 "Taking Drugs To Make Music To Take Drugs To",
Stereolab "Cobra and Phases Group Play Voltage In The Milky Night".

Q. How do you feel playing live?
I LOVE playing live shows. It's extra challenging for us compared to bands that go out there and play exciting rock music because our stuff is right on the edge of being boring, but the challenge is exciting and fun. We like to push the boundaries of what bands normally do. It can be a bummer sometimes when the audience doesn't "get" us, but for the most part, playing live is what it's all about.

Q. How do you describe Landing sounds?
I describe us using adjectives like "psychedelic", "droney", and "boring".


Q: Tell us about the process of recording the songs ?
We record in a number of different ways, but always at home. I'm proud to say that we've always been completely DIY- from recording to booking shows/tours. In the early days I recorded us on 4 and 8 track cassette. Then we graduated to 1/2" 8 track and finally to Ableton on my laptop. Since adding John Miller to the band we've been able to use his excellent recording facility with all sorts of cool pre-amps, mics, and spring reverb machines. John has taken over the engineering for the most part and our stuff has never sounded better.

Q. Which new bands do you recommend?
I'm losing touch in my old age, but I really like HTRK, Arp, Dead Mellotron, Sedcairn Archives, Follakzoid, Ashrae Fax, No Joy, Forma, and lots more. It's been really neat to hear from newer bands like Pinkshinyultrablast and Gnoomes who've said that we were influential on them. Luckily, I really like their music too!

Q: Which band would you love to made a cover version of?
We don't really do covers. We did a little digital EP where I covered The Cure and Kate Bush, but as a band we have a no covers policy.

Q: What are your plans for the future?
2016 should be action packed for us. Our 9th album, titled "Complekt", is coming out on These Are Not Records and we're working on lots of new stuff- tape releases, EP's, and hopefully something for a really cool label that I shouldn't mention yet, if all goes well. Also, we're building a pedal called "Wave Layer" that is a dual delay tape echo simulator with built in modulation. I'm going to hand paint them all and John's building them. It's also a possibility that we'll start a subscription based service through Bandcamp to give fans access to complete improvisational session, live recordings, and exclusive tracks. The plan is to stay busy and record new music like crazy!

Q: Any parting words?
We're thankful that people are still interested in us, 17 years on. I think that our new music is our best yet and can't wait to show everyone!
*
*
*
Thanks