Newhouse with Blue Unit - An Interview 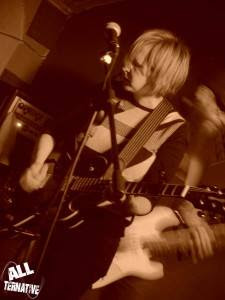 
Q. When did blue unit start? Tell us about the history...
Blue Unit started in the spring of 2014. Kevin, Jen, and myself were trying to find ways to stay musically active since the drummer for Brief Candles had recently moved to Ft. Collins, Colorado, and it was keeping us from being able to play local shows on short notice and help out touring bands that wanted to play in Milwaukee. Blue Unit became a way for us to all force ourselves to grow as musicians by playing other instruments and taking different roles in the band. After a couple months of song writing, we asked our friend Brock Gourlie, to play drums for us. We were already friends and fans of his other bands, so it was a natural fit.

Since then, we have played a handful of shows with bands like Be Forest , Shana Falana, and Ringo Deathstarr. Some people were expecting Brief Candles, but overall the reaction has been very positive.

Q: Who are your influences?
Our influences are varied pretty widely. Kevin and I played in punk and indie bands when we were in our 20's, Brock and I both love old industrial stuff. Jen loves the Sundays, Smiths and Kate Bush....we all have different tastes, but we all have several touchstones between us all, and we all respect each other's taste.

Q. Make a list of 5 albuns of all time…
Five albums of all time....speaking mostly for myself on this one. Talking Heads - Remain in Light, Starflyer 59 - silver, The Cure - pornography, Roxy Music - s/t, Psychedelic Furs - s/t

Q. How do you feel playing live?
Playing live is lots of fun, but also a big challenge for me personally. I have been playing bass for so many years with Brief Candles, so it's was much different switching back to guitar and playing leads/solos....I have always considered myself as more of a rhythm guitarist. I'm too worried about being tasteful to be much of a shredder. I know the others initially felt some anxiety over stepping out of their comfort zones and playing a new instrument in front of a crowd, but we're definitely more comfortable now, and we're looking forward to getting more live gigs under our belts.


Q. How do you describe blue unit sounds?
Describing our sound is tough.....I think all of our interests show through.....definitely some post punk, new wave, shoegaze, dream pop and maybe even some goth rock.

Fortunately Kevin and Jen have a studio in their home, so we have the luxury of recording ourselves, but it's not always easy. Home recording takes away some of the urgency that exists when you book and pay for studio time and a recording engineer, so sometimes it becomes too easy to put a project on the back burner. It's also difficult to make headway when we're trying to work on Brief Candles and Blue Unit songs at the same time. But having total control is a huge advantage, so that's the price we pay.

Q: Tell us about the process of recording the songs ?
As far as writing the songs goes, just like with Brief Candles, we are very democratic. It's the only way we know how to be. Usually one of us will come up with a part and the rest of us will write to it and try to give it direction. It can be a slow process sometimes, but I think it's worth it because everyone is invested in the music. Nobody is a dictator, coming in with finished songs and telling other people what to play.

Q. Which new bands do you recommend?
New bands....hmm....Jen is really digging Protomartyr right now. There are some really good new groups coming out of the Chicago area right now like Dim, Carbonleak and Star Tropics.

Q: Which band would you love to made a cover version of?
One band that I would like Blue Unit to cover would be Black Tambourine. We occasionally play a cover of "Night shift" by The Names.

Q: What are your plans for the future?
Our plans for the future are pretty loose at the moment as we focus on finishing up the next Brief Candles record, but we're really hoping to get a Blue Unit release out in the near future too. We have most of our songs recorded already, but they need finishing touches. I would really like to play out a lot more in 2016 and really fine tune our live set.

Q: Any parting words?
Thanks for the interview! Hopefully we will be able to tour Brazil some day!
*
*
*
Thanks