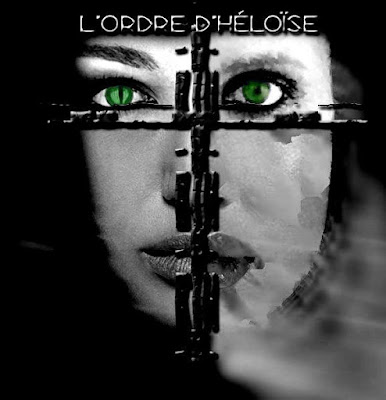 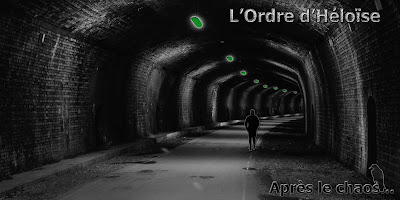 Q. When did L'Ordre d'Héloïse started, tell us about the history...
I met Frédéric front of the school in 1992, my look left no room for doubt about the fact that I loved The Cure! He was also a fan. He left the band in which he played to join my group "Black Scream". Then we decided to make our own music instead of covers... The group was renamed "L'ordre d'Héloïse". Frédéric mainly deals with the composition, I take care of the texts. Gradually, however, the tasks are divided equally.

During a long time, we have no more produced a lot, working life, family ... Resumed routine shelved passion ... But we have not disbanded the band, At the beginning of 2013, it seemed vital to work on a new album, that could witness also our lives that collapsed ... It is from this collapse that were born the lyrics and music of the album "Le chaos de l’ histoire" ...

At the death of Frédéric in early 2014, I began to try to publicize the group, perhaps just to honor him because he was my mentor, my role model and an incredible musician.

Jérôme joined the group at the end of 2014, we keep on the adventure together. Some friends also help us. Without them, I think that the adventure would not have taken such a dimension… Particulary Lory, who takes care of the promotion and give always good advices, Greg our webmaster and Kat our photographer. It's a sort of friendly collective and that's what we love more.

Q: Who are your influences?
The influences are many, musically The Cure, Joy Division, The Chameleons, The Cranes, Dead can dance and, of course, others, like Trisomie21, Norma Loy, Indochine…

The influences are also literary, some authors marked my life, like Camus and Sartre mainly, but I can as well quote others Duras,, Conan Doyle, Poe, Shelley... And for modern Frank Herbert or Alain Damasio...

Jérôme has influences resolutely more "rock" than mine, but finally I think that it is an enrichment..

Q. Make a list of 5 albums of all time…
Here is my playlist (Alain) :
1- The Cure "Faith"
2- Joy Division "Unknown pleasures"
3- Cranes "forever"
4- The Chameleons "Script of the bridge"
5- Dead can dance "Within the realm of a Dying Sun"

Q. How do you feel playing live?
Considering our current line up (duo), considering our age and considering our lives both personal and professional, we have de facto, became a studio band. You can never say never, but for having played some concerts in the past, I know the personal investment which it requires and it would be a lie t to say that it will possible in the short-term.

Q. How do you describe L'Ordre d'Héloïse sounds?
Even if we try to vary our creations, it is true that our music may be described in a general way by saying that it’s based on a strong bassline, several guitars often baritones, a little bit of rhythmic guitar and some sounds of analog synthesizers or with analog modulation... My voice is quite low and disenchanted...


Q: Tell us about the process of recording the songs ?
Everything starts always from the text… I write the text, and I propose a first musical version to Jérôme. Then we improve then the track and make several other versions, until we are satisfied. Sometimes we ask the opinion of Lory, that allows us to be confronted with a listener not involved in the creation process.

Q. Which new bands do you recommended?
The Black Hotel's Doorkeepers (The B.H.D.) the band of David Droz, because it’s excellent for the music, and also because on the human side, David is really an extraordinary boy (https://soundcloud.com/the-bhd-2).

Seven Pages for a Hedgehog, because we made some collaboration and we count to make it again and also there it’s full of talent and kindness (https://soundcloud.com/sevenpagesforahedgehog).

All the musical projects of my friend Lory with the composers who use her lyrics... (https://soundcloud.com/loredana-fayer/sets/dusky-sounds)

Q: Which band would you love to made a cover version of?
The Cure Obviously, and we have already made some, but it is always the same happiness to plunge ourselves into one of their piece. Recently, we made a cover of Joy Division, one of The Cranes, one of Daniel Darc... We love that exercise, so to answer the question, I shall say The Chameleons, I would adore playing a piece as the skin second or don’t fall while trying to pour a little our D.N A.there.

Q: What´s the plans for future....
Our album "Après le chaos" should be published on tape in september for a russian label. We already work on the following album that should be titled " "A la folie". The main plan, it is to keep on making some music and take so much pleasure from that. We are amateur, and what brings the music in our lives is essential.