The Head On The Door with Plasticstatic - An Interview 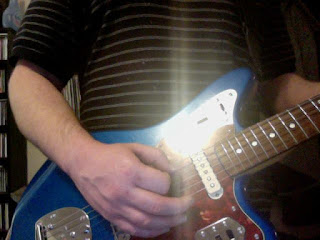 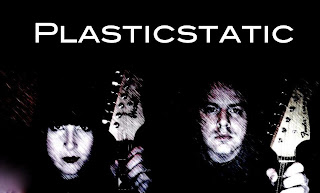 Q: When did Plasticstatic starts, tell us about the history...
It started in 1997. I played piano and guitar and recorded songs onto one track, no overdubs. Gradually I started getting better recording equipment, and more instruments. It was less about sound and more about words when I started, but now it’s pretty much equal.

In the first few years I recorded some cassette EPs and gave them to my friends. In 2006 I recorded an album that was the first thing that started to sound like Plasticstatic as it is now. I was still recording on tape then, and my master tape for that album ended up getting mangled beyond repair. Some of those songs were re-recorded for my first real album, Reverse.

Right after Reverse, I was able to get my wife Keisha to sing on one of my songs. She can sing much better than me, so I talked her into being a permanent part of the band. We made a short album or EP depending on which format you get called Anchors, and that’s the first thing that’s really sounded the way I wanted. It never could sound like that without Keisha.

Q: Who are your influences?
My biggest influence, also my wife's, is The Cure. Love and Rockets, Can, Psychic TV, Brian Jonestown Massacre, Eno, Bowie, Coil, Rowland S. Howard, Galaxie 500, Erik Satie, The Durutti Column, Current 93, VU, MBV, and Primal Scream are who I have listened to the most over the years.

Outside of music, I have been really inspired by Belle Epoque art and absinthe culture. I don’t believe absinthe makes anyone a better artist, but I do believe it makes them a different artist - a drunk one. I have recorded many things while drinking it.

Another big influence is Nina Pratchios. She did the art that was used for both Reverse and Anchors. When she said I could use one of her pieces for the cover of Reverse, I did a lot of editing and re-recording to make the album better. Her art inspired me to make the best thing I could at the time, to try to do justice to her amazing cover art.

Q: Made a list of 5 albums of all time…
For me, right now, it would be The Cure - Disintegration, Primal Scream - XTRMNTR, MBV - Loveless, Psychic TV - Dreams Less Sweet, and Bowie - Low.

For Keisha, they are The Cure - Disintegration, The Magnetic Fields - 69 Love Songs, The Smiths - S/T, Depeche Mode - Music for the Masses, and British Sea Power - The Decline of British Sea Power.

Q: How do you fell playing alive?
We haven’t played live yet. The closest thing is when I broadcast a live improvisation of guitar music to accompany the film Ubu Roi last year. We broadcast a video feed live on Ustream. That doesn’t count, but it felt good. I’d love to start playing live, but we need more people who are into our kind of music, and we live in a cultural dead spot right now. Maybe someday. 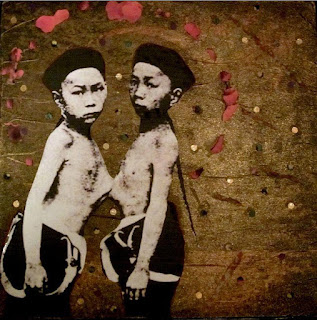 Q: How do you describe Plasticstatic sounds?
Sometimes ethereal, sometimes abrasive, sometimes loopy guitar and electronics. I hate to use the words shoegaze or especially psychedelic, because it seems to invoke a specific sound in most people’s minds. And reproducing the same sound with little or no advancements is not mind expanding. But we strive to expand.

Q: Tell us about the process of recording the albums?
Somehow they get finished, but I’m never sure how. They usually start as a drum loop, and then I start building layers of instruments. After I write words, I re-arrange what I’ve recorded in Logic to fit the song structure. I usually record very late at night on weekends. After everything else is recorded, Keisha records her vocals. She also has a lot of input on the sounds along the way and how they’re processed.

Q. Which new bands do you recommended?
We love Mirror Mirror, The Solar System, A*Star, Golden Gardens, The Blood Wisdom, Data Unit, The Common Men, and some not so new ones that deserve to be discovered by new people like The Sirago 17 and Spell 336.

Q: Which bands you love to made a cover version?
We have covered “Closedown” by The Cure, but that’s it so far. There are a few others we’ve talked about covering, like The Vivian Girls and Siouxsie and the Banshees and Brian Eno.

Q: What´s the plans for future....
Right now we’re in the early stages of writing songs for a split with another band. I shouldn’t say more about that until it’s definite. There’s also a full length album that we want to make after that. All of our music is free to download, and will always be whether a label puts it out or not. Keisha and I support ourselves with day jobs, so we aren’t dependant on anything to make music other than our own drive and free time. So we will keep making music as long as we are alive. Hopefully people will want to listen, but that’s entirely up to them. We had our fun making the music.

Q: Any parting words?
Thank you for thinking of us to do this interview, and thank you to anyone who takes the time to read this and listen to us. And if you download our music for free, which we want you to do, at least consider using some of the money you didn't spend on our music to buy music from another band. But please, don't spend it at Best Buy.
*
*
*
Thanks Ryan