Me and The Devil Blues with Hoboken Division - An Interview 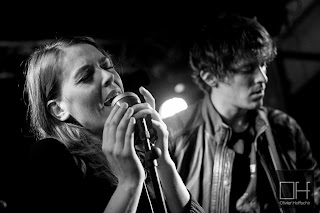 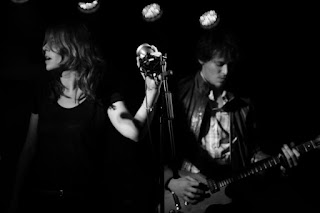 Q. When did Hoboken Division starts, tell us about the history...
We started the Hoboken project in the begining of 2011. We met a few weeks before, went for a beer and talked about music… We realised we have the exact same idea of how we want to develop a musical project, and the same tastes and influences (almost!).


We started working on some cover to learn to know each other, made one show and started composing. In our first gig, we used real drums such as bass drums and bass tom, but we quickly turned to drumboxes and sampler to have the abilities to mix real drums sounds and old school drumboxes. The mix between them are a part of our creation process.

Q: Who are your influences?
Marie : I come from the jazz world, and listened a lot of classic jazz singers : Ella Fitzgerald, Etta James… Aside of this, I really do love bands such as The White Stripes, The Dead Weather (well, basically everything that involves Jack White), also The Yeah Yeah Yeahs, Lykke Li.... Since I started Hoboken, I fell in love with the kind of blues Mathieu use to listen, RL Burnside and Seasick Steve for example. Mathieu: there's a lot! I started music trying to do Smashing Pumpkins and Stone Roses stuffs on the guitar. And soon after I come to the early rythm and blues and blues of Canned Heat, John Mayall and especially the Rolling Stones that drove me to Brian Jonestown Massacre as to the old school bluesmen such as Mississippi Fred McDowell or Skip James. Spacemen 3 /Spectrum and The Velvet Underground are also two main influences on me, and the use of drone. It's the kind of stuff RL Burnside and Kimbrough use for their hypnotic sounds. Of course, I don't always look into the past, but artists such as Mark Sandman (Morphine, Treat Her Right) and others that I told earlier made me come to listen BRMC, Black Angels, Death In Vegas... And I share a lot of influences with Marie such as the Detroit Scene (The Stooges, White Stripes) or Nina Simone, Cat Power, Janis Joplin (humm horns section...).

Mathieu: Humm... It almost change everyday depending the mood, but I would say: The Velvet Underground - Loaded, Rolling Stones - Exile On Main Street, Iggy Pop - The Idiot, The Stooges - Raw Power (Bowie mix), Brian Jonestown Massacre - Give it Back

Q. How do you fell playing alive?
Live music is essential ! We can’t imagine making music only in studio.

We personnaly expect music to move us, to make us feel strong and true emotions. The worst things are those calculated shows, where everything’s planned. We want to hear voices that breaks, and we wanna see sweat. That’s also what we want to give when playing live.It's always a kind of free time to forget everything and to be free to do what you want, we appreciate it when the audience feel that kind of things! 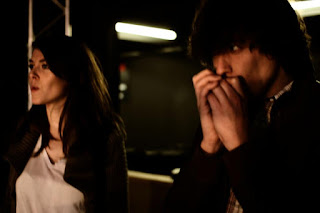 Q. How do you describe Hoboken Division sounds?
I really hope it’s like we want it to be : very raw, instinctive, sensual and sincere. If the audience could feel just a little bit closer to the juke joints mood, we succeed. We are going from sultry vocals to a blast of overdriven and fuzzy sounds!

Q: Tell us about the process of recording the songs
Usually, Mathieu comes with a good guitare line. We listen to it, see if it inspire us, and then work on it to make a structure. Then come the lyrics, almost always inspired by the music. We work together on that too.

For the recording, we use to make the first takes in Mathieu’s home studio where we rehearse. It gives a more « intimate », and live mood to the music. For the parts that need specific treatments, we work in a studio with a sound engineer, specially for the drums, to which we give a special treatment.

Q. Which new bands do you recommended?
Triggerfinger , an amazing belgian rock’n’roll band (not new, but huge in live !).

A great band for their music and for their independent approach of music is Feeling Of Love (Space rock from Metz in France) and another band from France, The Liminanas who mix Gainsbourg and garage music.

Friends from our town that you need to listen too : Dirty Work of the Soul Brother, a drum/organ noise band, really heavy !

Q: Which bands you love to made a cover version?
We’ve already made covers of a lot of band we love, the most interesting were RL Burnside’s ‘Let my Baby Ride’, Yeah yeah Yeah’s ‘Honeybear’…and generally all the bands which are more numerous than us : we then need to capture the essence of the track to be able to cover it, just the two of us. That’s a very good exercise !

Nighclubbing of Iggy Pop would be great to cover too. We'd like to envisage using the guitar for the piano part and harmonica for the guitar solo.

Q: What´s the plans for future....
We want to keep on playing live, the most we can, in bigger stages, in festivals.. keep on spreading our music everywhere. We will also tour out of France, like in belgium, Germany, Netherlands, and hopefully in USA next year ?And we would like to tour with bands from others countries with the same aesthetic. The community called the Psychedelic Undeground Generation recense a lot of them and we plan to exchange some shows.

We also planned an album release in the fall of this year, and we will spend a lot of time to provide great songs between garage blues and eventually psych. It will be normally a vinyl edition.

Q: Any parting words?
Thank you for listening, we’re always thrilled to see that our music is going far away ! Today, thanks to Internet, we have this possibility, and it’s amazing to share what we love with people everywhere.