Winter with Sacred Blue - An Interview 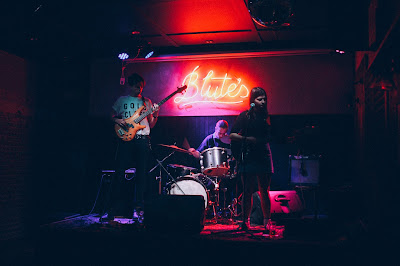 
Q. When did Sacred Blue begin? Tell us about the history…
We officially came together in June of 2017, however, the history of the band dates back to 2015 when Annie (guitar + vox) and Vincent (drums) met on Tinder and started jamming on and off. After a while we decided to pursue a band, and hit up long-time pal Joel (bass). One thing led to another and we came together from there!

Q. Make a list of 5 albums of all time…
1. On Fire by Galaxie 500
2. Disintegration by The Cure
3. Floating Into the Night by Julie Cruise
4. Closer by Joy Division
5. The Will to Death by John Frusciante

Q. How do you feel playing live?
It’s great when we play to a crowd, especially one that really vibes off our music. It’s a lot of fun, and Brisbane is home to a very wholesome audience.

Q. How do you describe Sacred Blue´s sound?
90s shoegaze/alt rock influenced, stripped down, chill. I feel like our recordings and releases are faithful to our live sound.

Q: Tell us about the process of recording the songs ?
We recorded our single at Bedlam Studios in Brisbane. We all play off each other, and part of our sound comes from the live recording aspect. Then we layered vocals. We knew how we wanted it to sound, so we decided to mix it ourselves. None of us had any mixing experience so it was a learning curve, but something we will most likely continue doing.

Q. Which new bands do you recommend?
Brisbane has a great little music scene, we’ve played with Lying Down (Bris) and they have a fantastic EP out, Local Authority (Bris) just put out his first song, Death Bells (Sydney) and the other artists on Burning Rose (record label), Treehouse (Hobart).

Q: Which band would you love to make a cover version of?
Sugarhill Gang, or some other 90s rap group.

Q: What are your plans for the future?
Keep writing music, release a Spring single by mid-October (and finish off the seasonal theme), wait for someone to tell us to come to Brazil (then subsequently tour South America).

Love from Annie, Joel and Vincent
*
*
*
Thanks