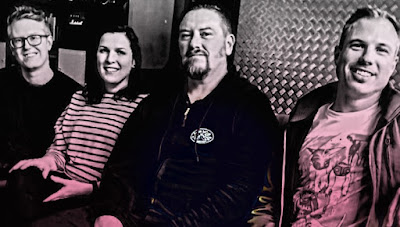 
Q. When did Trillion begin? Tell us about the history...
Trillion as it is at the moment is
Steve Hartley/ guitars, vocals
Darren Barnes/ bass, vocals, drum machine.

Trillion began in Sydney, Australia way back in the early days of 1993. We played a lot of shows and released a debut EP called Satellite. Shoegaze never really took off in Australia the first time around. It was all grunge and hard rock at the time and we ended up putting the band on indefinite hold in 1998. Me and Steve, who were the driving force behind the band, stayed good friends. After a Slowdive concert earlier this year we decided it was time to start jamming again. Three months later we realised we’d written about 12 new songs and were really enjoying ourselves again.

Q: Who are your influences?
I feel like this is going to be a pretty obvious answer.....but here goes anyway! My Bloody Valentine, Swervedriver and Sonic Youth are and have always been very large influences for us. We also listen to a whole bunch of other music, and have been influenced by genres like trip hop and artists like slackwax.

Q. Make a list of 5 albums of all time…
This is a really hard one and Darren and I could debate this endlessly! We're going to do something a bit different than the obvious ones (loveless, raise, etc) - and given there two of us we've up this to a top 7 list!
The Pixies - Come On Pilgrim
Teenage Fanclub - Bandwagonesque
Sigur Ros - Agaetis Byrjun
The Clash - London Calling
Pink Floyd - The Wall
Sonic Youth - Goo
The Reindeer Section - Son of evil reindeer

Q. How do you feel playing live?
It’s a great feeling when you’ve played a show and played well and have been appreciated. The adrenaline rush can be euphoric at times. On the flip side it can also get very frustrating, technical difficulties with so many pedals can be very harsh.

Q. How do you describe Trillion´s sounds?
We aim to write songs that have a strong groove to then. That sounds strange for a shoegaze band, but we both really like music that draws you in. Layering guitars so that the parts start to blend and merge in different ways, but also so that there's space. That sounds contradictory but when it's done well, your brain starts to hear melodies and interplay between the different parts that may or may not actually be there. And a strong bass line to keep the song driving along is always important.

Q: Tell us about the process of recording the songs ?
Since we live about 2hours drive from each other we’ve been writing and recording over the internet. We haven’t had any time in the same room yet! The EP was recorded/mixed completely on iPad GarageBand and mastered using an app. There’s no way we could have done this first time around, technology has really changed the game! Vocals were sang into an iPhone, crazy! Not a cent spent, total D.I.Y ethos.

Q. Which new bands do you recommend?
I think Blankenberge are the best of the new breed of shoegaze bands. They blew me away the first time I heard them. Trauma Ray sound very good also.

There’s a few Australian bands really standing out at the moment like Holy Forrest and Blush Response, but Deafcult are terrific, I think they are the big cheeses in the Aussie scene. Big shoutout to my buddy Dave from Lost Echoes in Portland, Oregon too!

Q: Which band would you love to made a cover version of?
We’ve never really done any covers before, but I’ve always wanted to do a big version of Pink Floyd’s ‘Set the Controls for the Heart of the Sun’....so nobody steal my idea ok!

Q: What are your plans for the future?
We’ve recently expanded from a 2 piece into a 5 piece band and are about to start rehearsing. Our aim is to record something in a studio this time and get out and play some shows again. After that who knows where we’ll go or what will happen, as long as it’s fun and not too serious.

Q: Any parting words?
Blogs like this one are what is making the scene worldwide so keep up the great work you are doing Renato! And thanks for the opportunity to get ourselves out there a little bit more. We’ve had so much support from all around the world so thank you to everyone that’s taken the time to at least listen or download our music.
*
*
*
Thanks