Melancholy Daze with Sunbather - An Interview 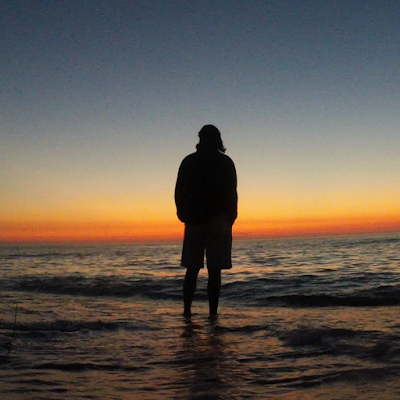 Q. When did Sunbather begin? Tell us about the history...
Well before Sunbather started, I'd been playing drums in local metal and hardcore bands for the last 10 years, and drums in general for the last 15 or so. Being a drummer first and foremost, I started Sunbather as a way to teach myself how to play other instruments, as an outlet to explore other genres I love, and to express and push myself in more ways than just smacking the drums around to power chords in my basement. And aside from one or two classes, I'd also slowly been teaching myself to produce, so I use Sunbather as an outlet to experiment and grow in recording as well. I started writing Intrapersonal in 2015, but I officially started Sunbather in November 2017 in Kingston, Pennsylvania, USA, and then relocated to Durham, North Carolina only a few months later. I spent the latter half of 2017 and the first half of 2018 working on new material for a full length, and in August released Melancholy Daze. Now I'm just pushing it and getting it to as many ears as I can.

Q: Who are your influences?
I'm obsessed with Tycho. I'd say he's a big influence in more ways than just music. His attention to his visuals, details in his jams, and apparent DIY ethic attract me and act as a guide for the independence and work ethic I'd like to strive for. He's the king right now. Dive is a perfect record. Additionally, I have a lot of influences in varying genres, but the ones who influence the Sunbather sound the most are bands like The Smiths, Blur, and newer bands like Tame Impala, Washed Out, Diiv, The Contortionist, etc.

Q. How do you feel playing live?
I love it. I've been playing shows in terrible bands with my best friends since I was 17 years old. My bands never gained a following, but just loading up and traveling around with my friends, playing to like 20 people in the back of book shops, basements, churches, clubs, backyards, art spaces, etc., then hanging out and eating pizza and drinking beer after were the best. We unfortunately haven't done that in awhile, but maybe this could get us back together someday.


Q. How do you describe Sunbather´s sounds?
Dreamy Whatever overall genre that word takes shape in, whether it be pop to shoegaze to hardcore, as long as I can make it fit that aesthetic, I'm open to write in virtually any style for Sunbather. For instance on Intrapersonal, I wrote it at a time when I was inspired by progressive metal and post-rock bands like The Contortionist and Karnivool. So some of those sounds are on the heavier, more aggressive side, but blend with a very relaxed and spacey atmosphere. The new record, Melancholy Daze, is a more straightforward shoegaze/pop-rock sound, which is different enough from Intrapersonal, but has that overall dreamy vibe so I think it still makes sense sitting next to it.

Q: Tell us about the process of recording the songs ?
Since I'm just one guy, Sunbather is a studio based band. I'll grab my guitar, plug it into my interface, load up an amp-sim, and just noodle away until something sounds even remotely cool. I'll record that little noodle quick, then start building things on top of it step-by-step; drums, second guitar, synths, keys, bass, more guitar, more guitar, more guitar... Then I'll sit down, write lyrics, and (try to) sing on it. Then after all that, if it doesn't' work or I'm not 100% down with it, I'll scrap it all and try again. After I get a collection of demos I'm happy with, I'll go in and re-record them at a higher rates then add some polish and spice to make them sound nice, listen to them to what feels like 1000 different times, then mix, then master.

Q. Which new bands do you recommend?
Go check out Saint Slumber (I think they're from New Jersey?) My old bands' played a couple of shows with those kids back when they were called The Soviet. Really talented indie rock/pop stuff. Their new record comes out in a few weeks. I'm really hype on them right now. And I wouldn't call these other bands new, but I've been spinning them a lot right now... * Wild Nothing * Title Fight * Beach Vacation * Shallou * FM-84

Q: Which band would you love to make a cover version of?
I'm actually in the middle of doing a cover of a Tycho song, but I've also been thinking about doing covers of a Beastie Boys or a Smiths song. For me, covers are cool to experiment with sounds and learn, but I don't think I'll do anything official with them. We'll see.

Q: What are your plans for the future?
Keep writing music. Keep pushing forward. Maybe shows as a full band, or maybe I’ll find a way to just jam by myself at some point, but who knows.

Q: Any parting words?
Thanks again to TBTCI for asking me to do this. Please listen to 'Melancholy Daze' on Bandcamp, Spotify, Google Play, etc and follow me everywhere and tell all of your friends. Let's grow this thing together
*
*
*
Thanks