Eden with Four Quarters - An Interview 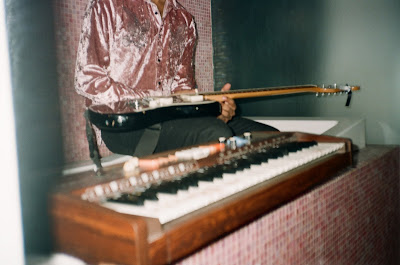 
Q. When did Four Quarters begin? Tell us about the history...
Four Quarters started back in 2014 with 3 of my friends from secondary school. Honestly, we just wanted to make music. We had always played in terrible little bands that practiced at lunch but never really did anything with it. A couple of us had gigged out a bit but the original lineup was really just 3 of my friends. They were kind enough to play songs I had written so I could hear them performed out loud in a small room. I’ve always written everything myself and really I don’t consider FourQuarters a band. It’s my project but I’ve had the pleasure of meeting amazing people along the way that have shaped the way I make music.

Q: Who are your influences?
Influences are weird, man. Obviously my music sounds like those bands a lot aesthetically, but I really do love so many bits and pieces that I hear everywhere. Really, Four Quarters is just me taking elements that I find appealing in other people’s music and letting that seep into my sound.

Q. Make a list of 5 albums of all time
In no particular order:
‘The Ziggurat’ (The Construction Corporation),
‘The Downward Spiral’ (Nine Inch Nails),
‘The Devil & God Are Raging Inside Me’ (Brand New),
‘Reverie Lagoon: Music For Escapism Only’ (Seahaven),
'Rooms Of The House (La Dispute).

Q. How do you feel playing live?
You know, it’s been a while since I’ve played a live show and I think it’s been a break I needed. It got to the point where I wasn’t having fun and basically just needed to get fucked up to play shows. I’m definitely aiming to gigging again though. While the last EP (Eden) was very much a studio release, the next EP is going to be high energy. I’m arranging things with live shows in mind…

Q. How do you describe Four Quarters´ sounds?
Melancholy, Noise, Reverb. I like to think it’s somewhat driving music but I do enjoy getting spacey and I’ve always like maintaining a balance between dense blocky music and more sparse atmospheric pieces.

Q: Tell us about the process of recording the songs?
My recording process has really changed on each release. I will say I’ve progressively been enjoying the writing/tracking process a lot more every time I go into to the studio/officially start recording final tracks. Basically, every Four Quarters song (or at least the catchy ones) starts off as a chord progression and a vocal melody. I generally don’t sit down and write lyrics that much, I usually sing along and fill in the lines I'm missing. From there it’s just about fleshing out the parts and assigning roles in the composition to different instruments. I’m definitely not the first person to say this but the key to a good song is it’s chord progression and general flow. You could give the most amazing musicians in the world a shitty song and it’ll still have that little void there where it just doesn’t satisfy you. You can try and beef it up and keep things exciting and do whatever you want, but if the melody and chord progression don’t keep you going on their own, you’re stuck.

Q. Which new bands do you recommend?
Check out: Atlas At Last, The KVB, MilkMouth, The Soft Moon, Tropic Of Cancer, Brainbombs, this awesome Russian band ‘Motorama’ (though I like their side-project Utro (spelled ‘Утро' in Cyrillic).

Q: Which band would you love to made a cover version of?
I’ve always wanted to play Heartbreak Hotel live but with a lot of fuzz. (Funnily enough that’s the first proper song I ever learned to play on guitar)

Q: What are your plans for the future?
I’m currently in the middle of writing/jamming/figuring out exactly what the next songs are going to sound like. I’ve been working with my friend Bennet Goergen, from the amazingly talented trio Lady Creation, a lot. He’s really influenced the way I’ve approached writing the coming EP. In many ways he’s reignited my passion for playing live in a small room through loud amps. I don’t have a release date or any other details, but I can tell you the goal is to put together a live band again and start playing the new songs.

Q: Any parting words?
Thank you so much for taking the time to share my words with the world. I genuinely appreciate it so much and I can’t wait to share my future work with you and your lovely readers <3 br="">*
*
*
Thanks