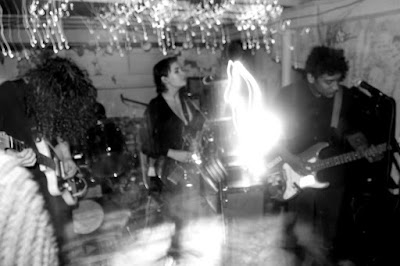 
Q. When did Sleeping Witch and Saturn begin? Tell us about the history...
A: SW&S began in the winter of 2015 as a solo effort. I spent several years recording demos and conceptualizing the project. In 2017 it became a full band with the help of some friends, andwe’ve been playing shows and writing new material since then.

Q: Who are your influences?
A: I think we draw from a bit of everything that we listen to, but for the most part we take influence from the more raw and eccentric acts of the past. Joy Division, Red Lorry Yellow Lorry, Velvet Underground, Bauhaus, Slint…

Q. Make a list of 5 albuns of all time…
A: I can’t choose a top 5 of all time. There are too many masterpieces. Here are 5 albums that I really like, in no particular order…
1. Lungfish – Artificial Horizon
2. Slint – Spiderland
3. DIIV - Oshin
4. Kraftwerk – The Man Machine
5. The Smiths – s/t

Q. How do you feel playing live?
A: Personally, I get really nervous before almost every show, even after playing live music for a decade now. Being on stage is weird and I almost never look at the crowd, but it’s still a cathartic experience that I’m also able to have fun with when I let myself. I think we all worry about whether or not we played well after a set, but there’s something freeing about our music that doesn’t necessarily constrain us to feeling like we have to be perfect.

Q. How do you describe Sleeping Witch and Saturn´s sounds?
A: We consider ourselves a Post-Punk band, and I think that that is a proper catch-all for our various directions. You might call us Art Punk.

Q: Tell us about the process of recording the songs ?
A: We recorded our EP with our guitarist, Rowdy Kanarek. We practice in his studio, and it just made the most sense to do everything with him. It’s more personal and low-stress, and he is good at what he does. We will probably continue to do all of our releases that way.

Q: Which band would you love to made a cover version of?
A: We have covered both Joy Division and New Order live, so we’ve already lived out that fantasy. In the future I would love to cover The Velvet Underground.

Q: What are your plans for the future?
A: We’re currently writing an LP, and will probably start recording within a few months. Until then, we’re planning on releasing a single, and doing some short tours.