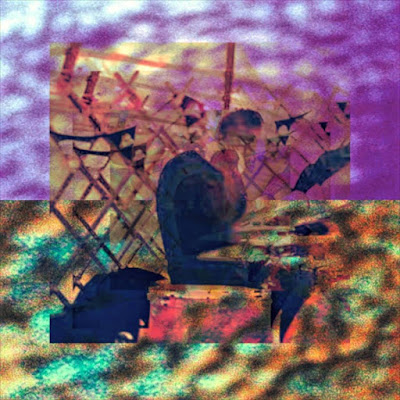 
Q. When did Icebeing begin? Tell us about the history...
The Icebeing project started about 4 years ago. I’d been recording music under the name Ersatz Window, which is more dreamy and ambient, and I wanted to do something a bit heavier and brighter with a stronger psychedelic influence and a larger focus on pop melodies. It’s still the same setup today, just me in my room playing around and trying to come up with cool sounds to build a song on.

Q: Who are your influences?
Loads. Musically, artists like the Flaming Lips, Caribou, MGMT, of Montreal, definitely the early Elephant 6 stuff like Apples in Stereo and Olivia Tremor Control… I’ll often come up with songs and ideas off the back of getting into certain albums and artists - some of the colder, more abrasive stuff on the first album ‘Portals’ was influenced by me discovering This Heat, for example. Getting into Raymond Scott’s early electronic stuff was a big one too around that time. I could list a ton of artists - there’s so much music I really love, a lot of it inspires me. In terms of recording and producing, Atlas Sound and Oneohtrix Point Never are probably the two artists that have had the biggest influence on how I want to approach things.

Q. Make a list of 5 albums of all time…
I could never pick just 5. I guess these would be up there at the moment - Gorillaz debut (first proper album I got, played it to death and it still sounds great), Oneohtrix R Plus Seven, Beatles White Album, Avalanches Wildflower, M.I.A Kala, Dirty Projectors Bitte Orca, Eno Here Come the Warm Jets, Beach Boys Pet Sounds of course… the list goes on. I tried to make one of these ‘Top 10’ lists just in my iTunes not too long ago ended up with about 80 albums - there’s too much good stuff out there.

Q. How do you feel playing live?
There is yet to be an Icebeing live gig, definitely something on the to-do list. Ideally, it’d be a big group of people playing together and doing cool stuff, with some lovely visuals of course. I’ve played live as a drummer in a couple of rock bands and I like the energy. I get like a primal buzz from it, very different to slaving away on a track in front of my computer. Last year, a friend and I played as Polar Twin at a festival in Copenhagen called ‘Lost Lands’, which was a whole different ball game. Loading and triggering samples on the fly and live-looping etc. - took a lot of preparation and a lot of potential for fuck-ups, was a fun challenge! Icebeing live would be a mix of the two.

Q. How do you describe Icebeing’s sounds?
Hopefully a blend of futuristic and nostalgic. And colourful.

Q: Tell us about the process of recording the songs ?
It changes from song to song. More often than not, I’ll start with the drums and end with the vocals, with everything else at some point in between. Sometimes I’ll have a full track with the chords and lyrics and everything in my head mapped out, other times I’ll be making it up as I go along. Most of the songs I work on now will be done in a day, like there’ll be a burst of a few hours where I’ll shut myself in my room and just record things, mixing as I go. Pretty much all the tracks on ‘Visualization Technique’ were done like this - mastering it probably took longer than recording all of it.

Q. Which new bands do you recommend?
I really like the Superorganism album that came out a few months ago, and the Lemon Twigs album from a couple of years ago is a stunner. Tropical Fuck Storm album is awesome too. Yves Tumor, who made one of my favourites from last year, just got signed to Warp so looking forward to his major label debut. And my good friends making music - empty3D, Holly Henderson, Rare Devices. Also Inevitable Daydream and Penelope Isles, two local-ish bands who are great.

Q: Which band would you love to make a cover version of?
I’ve never recorded covers, though sometimes I get ideas for them. I probably wouldn’t touch stuff by my favourite artists, just certain songs I love. ‘Lethal Enforcer’ by We Are Scientists is one of those hidden gems I’ve loved since I was young, such a great melody and sound, I’ve thought it’d be cool to make a spacier version of it. Scott McKenzie’s ’San Francisco’ is another one, awesome song.

Q: What are your plans for the future?
Take a little break from recording and focus on other stuff - get a live band together and play some shows! And try and make a good music video.

Q: Any parting words?
Thanks for having me
*
*
*
Thanks