ΨΧ with Cathedral Echo - An Interview 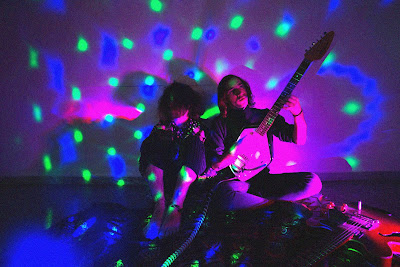 
Q. When did Cathedral Echo begin? Tell us about the history...
Well, cathedral echo essentially started when I started writing and recording music on my own when I was 16, which led to me becoming obsessed with the idea of creating my own "sonic universe" by experimenting and ultimately not being able to focus on anything else. I started appreciating sound little by little and discovered the possibilities of expressing myself through sounds which I would create. And all that transformed into my recording project, which later had its own name and it became a thing by itself.

Q: Who are your influences?
My influeces change all the time and obviously they've changed from when I was a kid, I was into 60's and 70's rock stuff like Pink Floyd, The Doors, Supertramp and later on into my adolescence, I started listening to more genres and electronic music and particularly a lot of neo-psychedelic bands such as MGMT, Tame Impala and The Flaming Lips. I also started listening lots of underground/ indie bands that wouldn't normally be on my radar such as Spacemen 3 and Sonic Boom (Pete Kember) that had a huge impact on me as well.

Q. How do you feel playing live?
It's a unique experience in itself and it's definitely something I love doing, even though it sets me out of my comfort zone, which is my home recording studio where I basically live in and work on music. It's also more limiting on how many things you can do, but at the same time that allows you to focus on the performance and the atmosphere itself, rather than spending hours trying to craft a sound or more.

Q. How do you describe Cathedral Echo´s sounds?
Cosmic kaleidoscope pop!(?). I'm always asked as to how I perceive these sounds and how I set about creating them and the best way to describe it is that I imagine a huge colourful cathedral-like building floating in the sky and those "cathedral echo" sounds are being generated from the inside, something like a factory of sounds. The whole concept of the name was inspired by Tangerine Dream's performace at "Coventry Cathedral" in 1975, being one of the most magical performances ever.

Q: Tell us about the process of recording the songs ?
The songs are usually written on one instrument, either on a guitar on a keyboard but the process varies hugely.

For example ,the track "i can feel the sun" was written the moment I picked up the guitar and it just came out of nowhere in one take, whereas the track "harumi" is basically 3 different tracks fused into one, so it all comes down to the atmosphere of each track and I try to keep as organic as possible.

Q. Which new bands do you recommend?
There is a UK dream pop band/recording project called The Death Of Pop, which I think they are vastly underrated because there is some really good songwriting and very cool sounds. Bands from Athens, Greece that I like, Acid Baby Jesus, Monochromatic Visions and The Vagina Lips.

Q: Which band would you love to made a cover version of?
I recorded a cover of Spectrum's "I Know They Say" a while ago, which although I did in a bit of a hurry, I enjoyed it, I would love to do an amazing psychedelic Spacemen 3 cover with the band, although I'm not sure which track specifically but I would do my best to do it justice.

Q: What are your plans for the future?
We just released our first EP "ΨΧ", which can be found in its entirety on youtube and can be purchased through our bandcamp page. At the moment we are setting up our live band so we can start playing gigs in Athens, because I took some time off recording the EP in my home studio. I hope I can start writing our first full-length album sometime in the near future, but I think that will take quite some time for now.