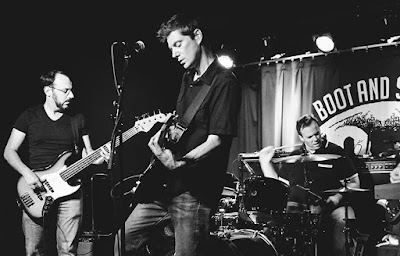 
This is Patrick from The Silence Kit. We're very excited that "Fall Protection" is finally out in the world. I recorded us and mixed the songs in my studio over a three year period. Because of the length of time, I wound up remixing many of the songs quite a few times, in order to make sure everything sounded cohesive from a production standpoint. It was originally going to be a 13 song album but we made the decision to cut two of the tracks which made it a tighter album overall, but it still covers quite a bit of ground stylistically.
Supermarket
We embraced our inner-Sonic Youth on this one, walking the line between noise and melody. There aren't enough songs about supermarkets and it's a fun word to sing (as anyone who sings along to The Clash's "Lost in the Supermarket" can attest). Darren says it was the most challenging drum beat to come up with for him but that listening to XTC's "Drums and Wires" proved to be the rhythm inspiration he needed. The rest of the song came together pretty quickly: I was making up the lyrics on the spot as Justin, Kristin, Darren and I jammed on it and I scribbled down and refined the lyrics later. James came up with a really unique, twisting lead for the choruses and solo which added another dimension to the song. The lo-fi intro was taken from a rehearsal session I'd recorded and spliced in because the noise was "just right" and we knew we wouldn't be able to improve upon it. We didn't know it at the time but it ended up being just the right start for the album.

New Year's Eve
This was the last song we wrote for the album. We weren't going to record any more songs, but this one came together so quickly that it made sense to record it. I'd brought this to rehearsal and I was thinking it'd be a sparse, "surf-guitar" kind of song. we had the basic structure in place after 1 rehearsal and recorded it a couple of weeks later. The Cure does this thing on a lot of their songs where Simon will basically play the same bassline through the whole song, and everybody else plays around it, and Justin said he was aiming for something like that with his part. Bryan came up with some really nice synth parts that added color and some counter melodies throughout. After that, we decided the song needed a little more punch, so James and I added more guitars. James' part at the end in particular really takes the song to another level. Lastly, I'd known all along I wanted female backing vocals on the choruses and funny enough, I'd played a rehearsal version in the house and my 8 year old daughter was in the room and she immediate started singing along, and it sounded so great I had to try and record her singing backup. And she nailed the part in one take!

This Time
The earliest versions of this one had a more stripped down feel and I think we called it "krautrock song" as a working title early on. The final version sounded a lot different, but the drum & bass part in the verse has been there from the beginning, and everything else was built around that. We're definitely wearing our 70s and 80s post punk influences on our sleeve with "This Time." It was one of the first songs we wrote for the album and still one of our favorites to play live.

Can We Skip This?
This is the second-to-last song we recorded for the album and we first did it as a three piece, just Darren, Justin and I. For this one, I was going for an R.E.M.-meets-shoegaze song, which is a bit of a tall order, but I think we're in the ballpark. James stepped in later and recorded a guitar part which really helped add another dimension throughout. Because of the feel of this one, Justin mentioned he wasn't sure early on if this would fit into the album with the other songs, but once it was fully mixed and mastered, it quickly became one of his favorites.

Everything You Feel Good About
I'm pretty sure this was the first song we wrote together and recorded for the album. In terms of sound, the first half is decidedly upbeat sounding, infused with an early New Order vibe, and the second half is more downcast and defiant, but lyrically there's a lot in there, and the song could mean something different to me every night, which is something I like about it. I've always loved songs that can shift from one mood into another, too. It's not easy to do naturally, and I feel like we accomplished that with this one. I also included a not-so-sly lyrical reference to my favorite Seam album "Are You Driving Me Crazy."

Wound
I'd written this song and recorded a demo by myself of an early sketch of it way back in 2004 or so. Fast forward to 2017 and Kristin and I got together to work on new songs, and I brought this idea back out. We rearranged it with him playing new synth parts and I switched to Justin's bass VI, which I play throughout the song. There is definitely an homage to David Lynch/Angelo Badalamenti somewhere in there. The bass VI and synth combination gives the song a nice darkwave vibe, the piano part keeps things moving and the drums' driving beat and dramatic pauses really pull things together. Now that we're playing as a five piece we can finally start playing this one live regularly, which we're all excited about.

Worry
For a long time we weren't exactly sure what to do with "Worry." This and "Supermarket" were actually originally one really long song. Everybody who heard it seemed to like it, but they all commented that it sounded like 2 completely different songs. We resisted for a while but when we eventually took their advice and reworked this into it's own song, we realized it was definitely the right move, so that each song could grow into it's own properly. I love Justin's bassline in this one, as it really anchors the song and adds different shades here and there to keep things interesting, and the outro was a cool experiment that worked out nicely: I was going for an almost Portishead-like vibe and so I reversed some of the drums, cut up some other things we'd recorded and recorded a synth part to tie the part together as the song gradually fell apart.

Never Say Goodbye
We were exploring our synth pop side of our post punk influences with this one. I had my Fender Jaguar, Kristin had a board full of synth modules, and he and I sat down and came up with the verses and choruses in one go. In only a few rehearsals, Justin and Darren had their parts written and the song's structure was solidified. In the mixing stage, I spent a lot of time on the drum sounds for this album and for this song in particular we wanted a big reverb-heavy snare sound and it took a little while for me to get it just right, but once it was there, the rest of the song really wrapped around the drums and things fell into place.

How Does It Feel?
We arranged and recorded this one really quickly. It's the densest rock song on the album and it took me a bit to wrap my head around mixing it. Once James came in and recorded his parts, it really helped me focus on what we should accentuate with the song, since his part really helps push the song forward and I feel like the dynamics that were always there got much more distinct, which made for a nice, dramatic shift between the louder sections and the softer section.

Tablecloth
This is another one I had written and recorded a sketch of, way back in 2005 or so but it was totally, totally different - a sparse, slow, moody arrangement centered around a piano progression. I played it for Justin and Darren and we decided we'd just jam and rearrange it however felt natural. We started playing the progression but in a completely different way: Justin's energetic bassline and Darren's jagged beat drove the song forward in a way I'd never imagined and I switched to playing more of a lead guitar part and things kind of took off from there.

Discard
Sometimes inspiration can be as simple as getting a new guitar pedal. I got a new pedal for Christmas, and the first time I played with it, I sat down and wrote "Discard," and I think I sent the other guys a video of me playing the main progression on Christmas day. We recorded bass and drums together and Darren says although it might be the simplest song for him to play, it was the most difficult to record due to its slow tempo. He used mallets on the the verses and sticks in the louder sections to give it two different feels and for some unique textures, and I recorded the main guitar and synth tracks and then came back a few weeks later and added the leads. Songs like this are such a fun canvas to work with and experiment with, and the trick is always to make sure each part is serving the song and is there for a purpose. So, although I tried a lot of different things on the song, there aren't that many tracks, considering. Anytime we sent someone the rough mixes they'd say this was one of their favorites. It really only would work as the last song on the album, and I do think it provides a nice closure to the album.
*
*
*
Thanks