Endless Chase with Boundaries - An Interview 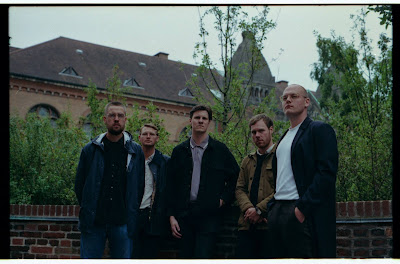 Q. When did Boundaries begin? Tell us about the history…
We started out a couple years ago when I began to record some demos of my own just for fun. I have never considered myself a singer or anything, but after years of playing with other singers or backing other artists, it felt very liberating to do something completely on my own. After the first couple demos I played it to Emil (guitar player), and to my huge surprise he liked the songs and then we sort of created the band, just being the two of us in the beginning. Shortly after Jacob and Jonas joined the band, and we played with that constellation for a year. Recently during the recording of the EP, Morten joined us and has since been an integral part of the band

Q: Who are your influences?
I think it is safe to say that the influences vary quite a lot depending on who you ask in our band.

When I started the band I was very influenced by the usual suspects when it comes to post punk / Shoegaze acts such as New order, Joy Division and My Bloody Valentine. I think it is alright to be very honest about your influences when you start to write your own music, but then gradually move away from it after your first release. We are currently in the process of writing new music and lately I have felt very influenced by Death Grips, JPEGMAFIA and Skee Mask, which is something that is usually out of my comfort zone. That being said I have also felt very inspired by the latest records from acts such as METZ, Idles and Ought, which might not come as a huge surprise for people who listen to our music.

Q. Make a list of 5 albums of all time…
Not in any given order.

Q. How do you feel playing live?
We enjoy it a lot. We are a group of really tight friends, so it is always fun to go out and play the songs. I also believe we enjoy the challenge of re structuring the songs for live use. Our recording process sometimes is quite comprehensive, and contains a lot of layers and details, so it’s usually a fun challenge to condense these recordings into a simple band context, with a only 5 sets of hands instead of a 30 track mixing desk.

Q. How do you describe Boundaries´ sounds?
I would place us on the edge between shoegaze and post punk.

Q: Tell us about the process of recording the songs?
It’s been a fairly long process. We started with our first recordings in the spring of 2017, but we felt that it was important to work a lot with the songs to obtain a more personal sound, and not just sound like another Joy Division cover band. We write the songs very collaboratively, where someone brings a demo to the studio or rehearsal, and then we kind of take it from there.

Q. Which new bands do you recommend?
Lately I have been really into this artist called Kraus, who sounds like if Death Grips decided to make a shoegaze album. It is almost impossible to find any info on this guy, but I would really recommend people to check out his music despite that. Apart from him there a lot of Danish bands I would recommend as well, such as The Entrepreneurs, Leizure, Spines, Blood Child, Eerie Glue, Gents, ATUSJI and Hoy La.

Q: Which band would you love to made a cover version of?
I am not entirely sure if we will ever play a cover, but if I had to choose I would pick I Cant Go for That (No Can Do) by Daryl Hall and John Oates. That would be quite a laugh.

Q: What are your plans for the future?
In the nearest future we are going to play some shows backing up the EP, but as mentioned prior, we are already starting to write new songs, and we will hopefully release new music again in 2019.

Q: Any parting words?
Thank you for the interview!

Hopefully it will get us closer to playing a show in Brazil some day.
*
*
*
Thanks