Tell Me How This Ends with Curtsy - An Interview 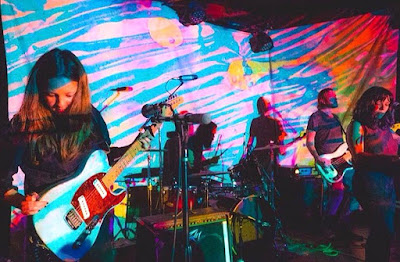 
Q. When did Curtsy begin? Tell us about the history...
We’ve all known each other for about five years, except for our drummer, Jonathan, whom we met in December of 2017 and fell in love with. Austin (vocals, guitar) and Crystal (vocals, keys) go the farthest back, having met when Austin auditioned as a lap steel player for Crystal’s country-folk band in 2012. We bonded over our mutual love of 80s pop and 90s shoegaze, and became friends, bandmates, and songwriting partners. The songs we wrote together started sounding more like rock and pop than country or folk. We began the project that evolved into the band we are today. Kai (bass) joined us along the way after attending a show in Ventura, CA. Austin met Tamara (guitar) in 2014 from being involved in the music scene in LA. She had heard of Curtsythrough the local-band grapevine, so when Austin invited her to jam with the band, she fully accepted his invitation. Tamara met Jonathan in 2016 through class mates in college, all of whom seemed to be in different bands with him at the same time. When the band needed a new drummer in 2017, he was first on her list.

Q: Who are your influences?
Beach House, Radiohead, The Cure, The Beatles, Tears for Fears, Fugazi, Paul Simon

Q. Make a list of 5 albums of all time:
1. The Cure - Disintegration
2. The Dandy Warhols - Thirteen Tales to Urban Bohemia
3. Paul Simon - Graceland
4. Radiohead - Kid A
5. Mazzy Star - So Tonight That I Might See

Q. How do you feel playing live?
The love we have for playing live is indescribable. There’s nothing like having that kind of spontaneous conversation with people you trust. It's amazing.


Q: Tell us about the process of recording the songs ?
The process of recording songs begins just from a melody Austin or Crystal or both have been writing. They bring it in to practice, we then we take it apart and just jam and build on it until we feel it is complete. The band fully works together to create every element each member want in our songs. When we go to record them, we do the same process of adding certain things and sounds wed want to try out. We work as a team and to make sure everyones voice is heard.

Q. Which new bands do you recommend?
The Purrs, A Beacon School, Tigercub, Cloud Nothings, Palm

Q: Which band would you love to made a cover version of?
Yeah Yeah Yeahs

Q: What are your plans for the future?
Making new music and touring!!! That’s definitely the next goal.

Q: Any parting words?
Thank you so much! Our new album Tell Me How This Ends is out now!
*
*
*
Thanks