Sol 0 with L-space - An Interview 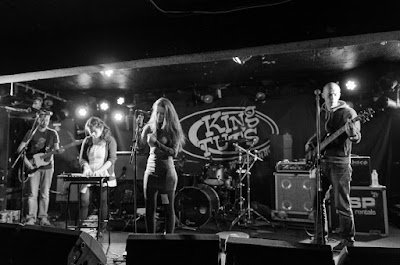 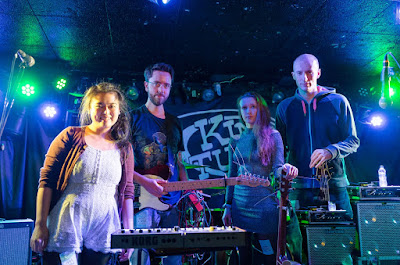 Q. When did Softer L-space start? Tell us about the history...
Gordon: Lily and I met when we both worked for a charity in Edinburgh. We bonded one day when we both had to glue our shoes back tother because neither of us could afford new ones! I met Dickson through the editor of [Untitled], a literary journal from Falkirk. I met Lily at the same charity in Edinburgh I met Lily, but Lily had left by that point.

Lily: I think the roots of L-space began in each of us separately wanting to make music and reading similar books, and then we were lucky enough to meet each other in our workplace, and then find two other talented musicians, Dickson and Maggie, who clicked with us well. Or, as Carl Sagan once said, “If you wish to make an apple pie from scratch, you must first create the universe”. We are apple pie in a universe. Kind of healthy but also kind of not.

Q: Who are your influences?
Gordon: Radiohead, El-P, and Olafur Arnalds.

Lily: My main influences are my studies in Cognitive Science, AI and space exploration, as well as science fiction novels. Oh yeah and music. Especially other inspirational female artists like Bjork, Grimes, Mitski and Janelle Monáe and artists with powerful political messages like Run the Jewels. My cat influences me.

Q. How do you feel playing live?
Gordon: I'm looking forward to it! We're playing at King Tut's in Glasgow on the 4th of February- I'm excited to see how the crowd reacts to our songs, plus we'll be playing some songs nobody as ever heard before, which is exciting.

Lily: Sharing our music means so much to me, so I am so pleased to be able to do it in live form as well as on record. People often get something different from the live experience and I hope to give them a fun, interesting, warm and spacey experience! I bought some holographic shoes with wings to make me feel less nervous.

Dickson: Excited. It’ll be interesting to see how an audience responds to our material.

Q. How do you describe L-space sounds?
Gordon: I think we sound a bit like Portishead covering the Flaming Lips if they were going through a Radiohead phase.

Lily: This has been difficult when people ask us. I usually say electronic dreamy music with a piano core and futuristic and sci-fi themes. We like to experiment with different sounds and genres though, so expect hip-hop, classical and punk-rock in the future! I would also say that at least for now, we don't sound that polished. For example, I have never had any singing training and I don't really know how to use my voice properly. But some people might like that raw, natural quality, so I try to see it as a positive.

Dickson: Equal doses of the silky and the chaotic. It’s lo-fi poppy shoegaze for star lovers.


Q: Tell us about the process of recording the songs ?
Gordon: Lily is going to go into a lot of detail I'm sure!

Lily: For most of our songs we have recorded them in Gordon's living room while him and his wife Anca bring us guacamole and wine to feed the creativity. We use a Shure SM58 mic (recommended to me when I interviewed Michael Winslow from Police Academy!) and an audio interface to record onto Gordon's laptop, as well as direct inputs from an electric piano, Korg synth and various guitars. We also work with samples and produce our tracks with Audacity and Garageband. We have recorded one song in a studio and hope to record more like that when we can. If it is a song I have written from the beginning, I already have the melody, but if it is a song Gordon has written there is a lot of me humming into a mic until I find the write melodies and harmonies!

Dickson: Gordon and Lily are best placed to answer this. On the technical side, it’s currently a combo of in-the-house-with-a-laptop recording and professional studio use, using a sound engineer and Pro-Tools.

Lily: Not sure how new is new, but I would recommend Shield Patterns, Tusks and PWR BTTM

Q: Which band would you love to made a cover version of?
Gordon: Sigur Ros, All Saints, Manic Street Preachers

Q: What are your plans for the future?
Gordon: To play our music all over the world and to record much, much more. I'd also like to send our music into space somehow!

Lily: Ideally we would like to take our music to the future Mars colonies. I hope Elon Musk replies to my emails. More soon than that, we hope to create more records to share all over our home planet, Earth.

Dickson: Play more gigs, record more tracks and enjoy the process. L-Space is the most laid back band I’ve worked with. This is a good thing. When folk are chilled, the songs almost kinda happen themselves.

Q: Any parting words?
Gordon: The world may be a confusing, sometimes horrible, place- but there are moments of beauty out there if you look for them.

Lily: We need to steer humanity's future in the right direction, whether it is with science or music or kindness. Everyone can do a little bit. GO GO GO.