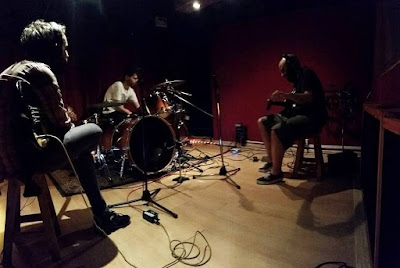 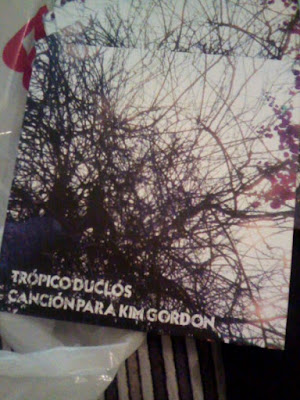 Q. When did Tropico Duclos start? Tell us about the history...
Tropico Duclos started in 2016 as a solo project. I wanted to put on tape some songs that I’ve been working on that didn’t fit with my other band (Cadaver Exquisito). I was lucky enough to get some really talented friends on board like Leandro (bass, synth) and Manuel (drums) and we started working as a band. The name of band comes from Henry Miller and the ancient name of my hometown (“Duclos Beach”, now called “Playa del Cerro”).

Q. Make a list of 5 albums of all time…
You made me realise (EP) (My Bloody Valentine)
A Thousand Leaves (Sonic Youth)
Give it back! (The Brian Jonestown Massacre)
Nowhere (Ride)
Pornography (The Cure)

Q. How do you feel playing live?
It’s my favourite thing in the world. There’s nothing like the excitement that you feel when you hear a loud guitar in your head with the drums pushing you forward. When I’m playing live I feel like “hell yeah, this is what I live for”.

Q. How do you describe Tropico Duclos sounds?
Tropico Duclos sounds like the place where the South Atlantic waves crash down on the River Plate…just rambling. Dreamy trippy music for headphones, lying down staring at the ceiling, riding the bus, and isolate yourself from angry pedestrians when you’re walking down the street , played by people who love My Bloody Valentine and Led Zeppelin at the same time.


Q: Tell us about the process of recording the songs?
Both of the songs of our single “Song for Kim Gordon” were recorded on a Tuesday night at the studio of a friend of us here in Montevideo. We played live (drums, bass and guitar), and then I overdubbed the lead guitar and vocals. We’re working in another songs which were recorded that way, others have been recorded in my room, in Leandro’s house, and one of them in Buenos Aires with our friends from “Cuarteles de Invierno”.

Q. Which new bands do you recommend?
“Cuarteles de Invierno” from Buenos Aires, “Las Cobras” from Montevideo, and “Giant Surprise” from California.

Q: Which band would you love to make a cover version of?
Ride, The Jesus and Mary Chain, The Cure.

Q: What are your plans for the future?
We’ll be releasing our Single in vinyl on February, and by April we hope to have our first LP ready. We’ll be playing live in Montevideo in April, and we’re waiting for some tour dates in Buenos Aires and New York. We’d love to play all around South and North America.

Q: Any parting words?
We like to share our music like SST and Dischord Records did in the old days, we’re all about meeting new friends and bands. Thanks a lot!
*
*
*
Thanks