In Rainbows with Synthesize Her - An Interview 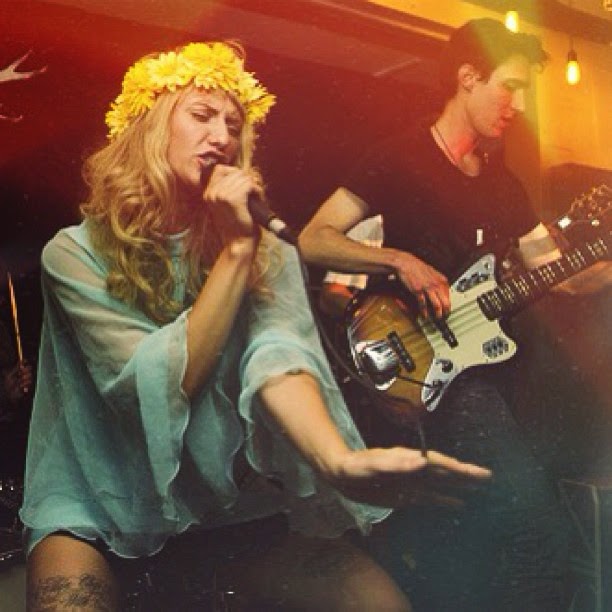 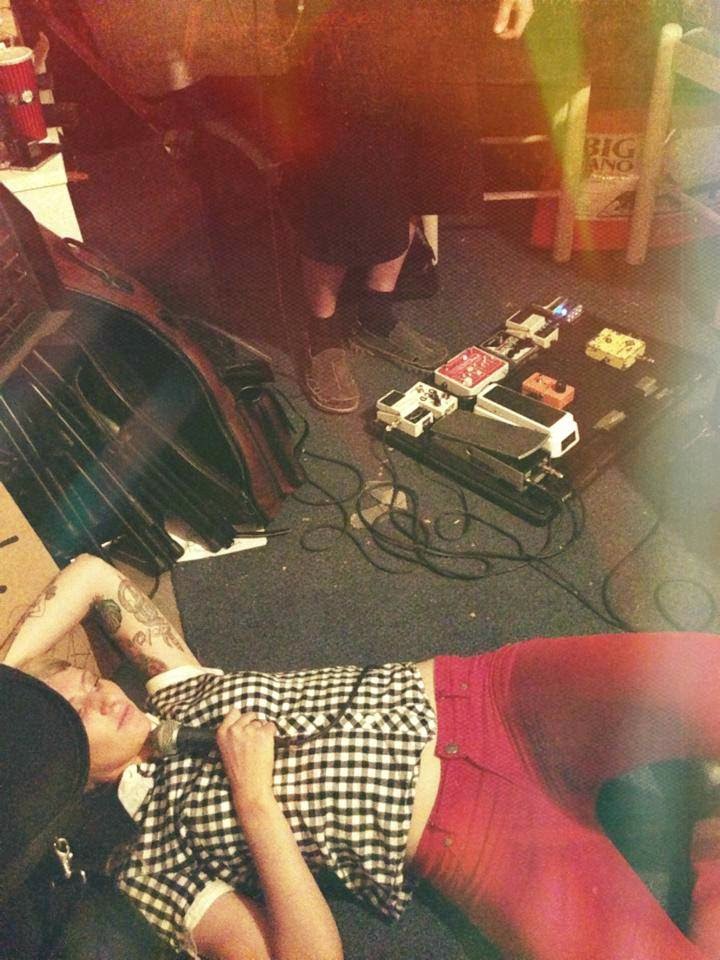 Q. When did Synthesize Her start tell us about the history...
Alexandra. Synthesize Her started out as just a couple of song ideas in the summer of 2012. Together, Alex K. and I saw the bands Girls and Unknown Mortal Orchestra play here in Reno. That show, along with the albums of those two bands sort of made something click in me. I had always sung in choirs and stuff growing up, but besides some dorky diary-written crap, had never tried to create a band or an album. The day following the show, sitting at my office job, I hummed the melodies and wrote the lyrics to Summer So Sweet, Candy Girl, and Don't Get So Down. That same night, I approached Alex K. who I was dating at the time, and asked if he would be interested in doing a one-off shoe-gaze album with me. He was all in, and we finished up the songs in about 2 weeks. Alex could really read my mind in regards to the vibe I wanted for the album, and since he was playing all of the instruments and producing the sound for it, this was really important.

That summer, I had a pretty bad wake-boarding accident, and was in a wheel chair for a while, so we took some time off for a year, and re-visited the album as friends the following summer, with the intention of recording the songs and doing one big show. We released our single "Summer So Sweet" in june of 2013, and our album, "Sun Damage" ten days later. That September we played a show, intending for it to be the first and only, at the Holland Project- a really awesome all-ages art and music initiative for and by young people here in Reno. We had an incredible line up of guys making a 6 piece live band. As Synthesize her was intended to be an art project versus a touring band, the live show was really important to me. I went into it with the desire to show my heart- hurting, and screaming; bearing true human emotion that captivates people, and scares them, and makes them feel uncomfortable, though is still painfully relatable and compassionate. I think we achieved that last year, and even more so this year during our second show, also at the Holland Project, on August 14th. We just released another single "Fuchsia" on band camp last week.

In regards to the name, it didn't come until way later. We had trouble agreeing on something that properly represented our sound, and eventually settled on Synthesize Her (though i'll admit that we were always Flower Cult, in my mind).

AK. Synthesize Her began in 2011 when the singer Alex Crowe and I were dating. We became inspired from a lot of the live music we were seeing and decided the start our own band. We wrote the whole Sun Damage album together in about 2 weeks but didn't record the songs in the studio until the following spring. (We broke up that summer).

if i could put a few more on there i'd add- Mama's Gun- Erykah Badu, Black and Blue- Rolling Stones, Maggot Brain- Funkadelic, Smokey Rolls Down Thunder Canyon- Devendra Banhardt

Ak. My top favorite albums are Moon Safari by Air, Superwolf by Bonnie Prince Billy, Voodoo by D'angelo, Niño Rojo by Devendra Banhart and Loveless by MBV. I'm not sure what Alex Crowe's top albums are...

Q. How do you fell playing live?
Alexandra. Incredible- Best feeling ever. After playing a show, I feel like i've been through 2 years of therapy, taken a bath, and had a back massage. Sure, my elbows and knees are cut up and my voice is horse, but it's truly cleansing.

I love the power to navigate the emotions of your audience- when you cry, they cry. When you're angry, so are they. It is as invigorating and addictive as a drug.

Ak. Personally, playing live to me is very exciting and inspiring. It makes me remember what I love most of all in life, music.

Q. How do you describe Synthesize Her sounds?
Alexandra; A melodic wall of sound. Summer dream pop. Shoe gaze meets drone meets gender bending gospel. I don't really know.. I just say it's free- it's for you- it's for the summers when you feel like a love-sick teenager staying up late on hot nights when the dry sun doesn't go down until 9pm. It sounds like being in love i think.

Ak.The sound of Synthesize Her is simply the sound of summer, we wrote the album Sun Damage as our ode to the feeling of the summer season. It should be resonant in the songwriting and vibe. The track called 'Summer So Sweet' is the epitome of what we were going for with that album. 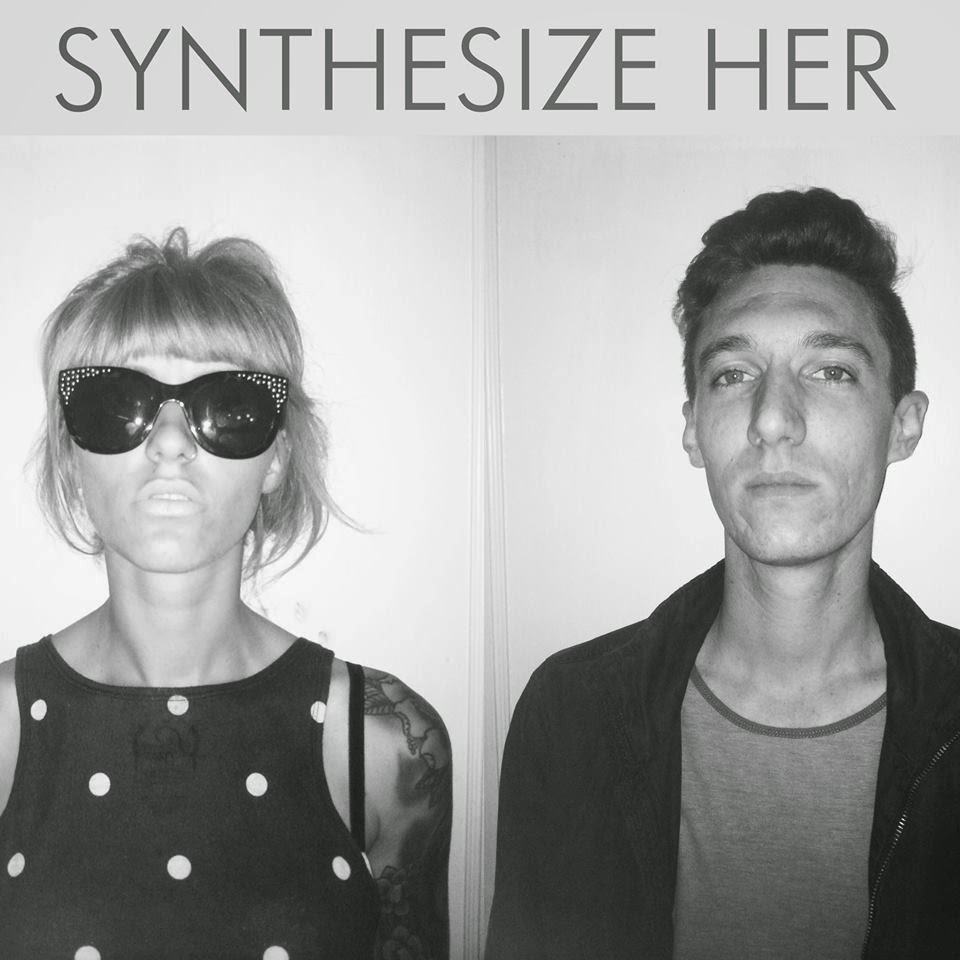 Q: Tell us about the process of recording the songs ?
Alexandra. That's really Alex K's jam. He is the master behind the music. We recorded the songs in his bedroom. I would write the songs, hum out a melodies and drum lines, and he would come back with it fully recorded, ready for me to put the vocals on top. I'd have input on little tweaks here and there, but the recording was ultimately Alex's baby.

Ak. The recording process for Synthesize Her is very unique and it all takes place in my bedroom. I start with programming the drum beats on my iPhone using a vintage drum machine. After I lay those down, I record about 5-8 different guitar lines per song. Once that is finished I record the bass and then the moog synthesizer parts. Keep in mind that I am a multi-instrumentalist and the band is a duo between myself and the singer. So I do the actual music part and she sings everything. I usually can finish 1-2 songs in a session and then have Alex Crowe come in later and record the vocal parts. Vocals are usually doubled and dubbed/harmonized over to create a really thick ambient effect.

Q. Which new bands do you recommended?
Alexandra. I'm not sure about new, but new to me: Warpaint, FKA Twigs, Widowspeak, Giant Drag

AK. I recommend listening to Hiatus Kaiyote and The Stepkids, those bands are amazing and truly innovative.

Q: Which bands you love to made a cover version?
Alexandra.We have covered 2 songs: I'm Your Man by Leonard Cohen, and Lonesome Town in the style of Ricky Nelson. If we had more time, I would have also loved to cover Touch by Daft Punk- there is a lot left up for personal interpretation with that song- i think it would be lots of fun to play around with.

Ak. We did a cover of Leonard Cohen's "I'm Your Man" and Ricky Nelson's version of "Lonesome Town". Video for those will be on YouTube pretty soon.

Q: What´s the plans for future....
Alexandra. I am leaving on a one-way ticket to India for a while. Now that I'm done with school, it's time to explore, I'm not sure how long i'll be gone for.

Ak. Plans for the future involve taking about 2 years off from the band but in that time potentially releasing Sun Damage on a physical format like Cassette tape or Vinyl.

I don't know if we'll keep up with Synthesize Her, but she's a beautiful project that I've thoroughly enjoyed and if something comes of it, who am I to deny it?

Q: Any parting words?
Alexandra. Thanks for taking an interest in our band. Please enjoy our album and singles. Find them here http://synthesizeher.bandcamp.com/track/f-u-c-h-s-i-a for free. We made this for you because inspiration breeds inspiration..

Ak.Thank you so much for the interview! We really appreciate your time and interest in Synthesize Her.
*
*
*
Thanks Alex & Alexandra