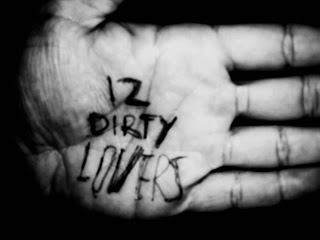 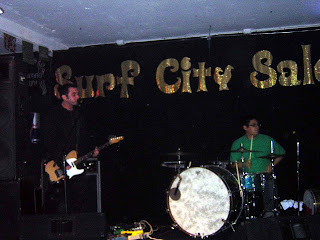 Q. When did 12 Dirty Lovers starts; tell us about the history...
Eric/Danny -Danny (our drummer) and I had been playing together since high school and had stopped for a couple years in our late 20’s, I’m always playing guitar, making silly songs or making noises and since I had drums and all sorts of instruments, I decided to make up some songs or at least have some fun with recording because I hadn’t really recorded whole songs by myself. I made a dozen or so and didn’t really think anything of it, posted it on MySpace because that was thing to do at the time. People liked it so I thought it would be fun to play shows, I emailed a few places and surprisingly got booked so I asked Danny if he’d like to play, he did. Since then we’ve played and recorded a few things. For the most part it’s been Danny and I but we’ve always wanted at least one additional member. We had posted a couple ads on Craigslist and jammed with a couple people but nothing ever picked up.

William Tutton of the Geraldine Fibbers actually answered one of our ads, it was awesome, I think he had answered the ad more in curiosity because I had sited his band as one of Danny and I influences, either way it was awesome. I think we jammed twice. Recently we found Tyler a kick ass bass player who enjoys mixing red eye coffee and red bull.

We just recorded Eyeball Madness (EP) at Los Angeles’ Cave studios. Eyeball madness is a collection of six original songs that the band has been playing at our live shows.

Danny - Roy Orbison. Peggy lee. Hank Williams. The damned. The jam. Joy division. Sonic Youth. Echo and the bunnymen. All the music/score from both the godfather movies.

Danny
Goo
All things must pass
Music from big pink
Milo goes to college
When the pawn...
Greatest hits 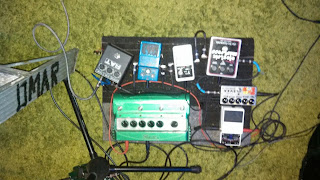 Eric - It’s in the moment, it’s exciting, and it’s unexpected - mostly because something’s going wrong or too right. For instance we played a show couple months ago, first song goes by – not bad, second - getting better, third song I break a string and didn’t bring a spare guitar so I needed to change a string ok bummer but I do it and move on, so I hit the amp on standby and somehow the tube blew up but I didn’t realize it till after the sting was on and I had been playing with the amp, the house lent me the guitar amp – cool. ok next song starts and for some reason there’s no sound from the guitar, uhmmmm, I’m plugged in the amp and there no pedals (in case it was a cable), and then I realize that only one pick-up is working so I guess somewhere between the unplugging the electronic came lose, all in 2 minutes. Sweet!

Or another time we were playing a show where were playing in front of a mirror the width of the stage and I think it was during the first half of the set, something caught my eye and turned, from the mirror I could see the amp head was on fire from a spark form one of the tubes..

Danny - The devil Laughing while he had a mouthful of chicken pot pie.

Q: Tell us about the process of recording album?.........
Tyler - The songwriting process is organic and very democratic but recording is another thing altogether. By that time you know your parts, and there's a little room for improv, but it's kind of l stop and go, like maybe even being an actor in some kind of production. Because there's a lot of waiting around and quietly approving or disapproving and then suddenly you have to perform and you know what to do and you are lifted from that frame of mind and put in a position to nail it in a few takes.

Eric / Danny - We went in with the songs mostly completed from our demos, we learned a lot about what we liked and don’t from being in a studio. We record all the time at practice but this was more intense, I think mostly because were unfamiliar with being in a professional studio compared to ours. We did it in three days, drums ‘n bass then guitars, vocals ‘n keyboards, then mixing and touchups. We recorded with Josiah Mazzaschi (Light FM ) in Los Angeles. 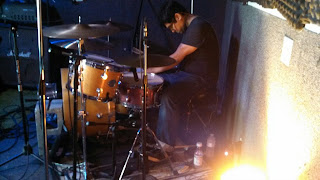 Q: Which bands you love to made a cover version?.............
Descendants, Wire, the Screamers, Crass, the Misfits, Del Shannon, Super tramp, Bob seager.

Q: What´s the plans for future....
Tyler - Let it unravel whilst we work hard. There's nothing more to do.

Eric - Right now we’re working on booking shows and new songs. We have a handful were working on so hopefully those should be done soon.