CºLD with White Hex - An Interview 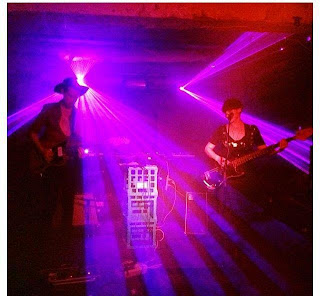 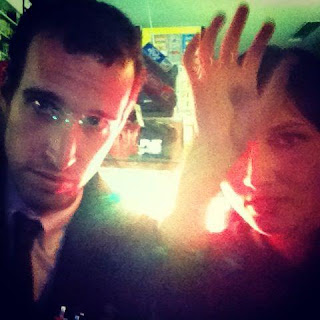 Q. When did White Hex starts, tell us about the history…
White Hex began when Tara moved from Melbourne back to Brisbane for a whole variety of reasons. She turned up on my doorstep and then moved in a day later. A day later we began White Hex and were practising in the lounge room of this old fucked up house filled with some strange/wild/unhinged people. People we love and hated. We would practise everyday just because we could and it is all we had to do. And then we just decided to go to Egypt and hung there for a while before settling in Berlin to finish the record and record it which we did during a particularly harsh Berlin winter. That winter was wild but that is another story.

Q. Made a list of 5 albuns of all time…
I have had to do this in other interviews so i will just take parts of that,

Venom P. Stinger - Meet My Friend Venom
Venom P. Stinger were one of Australia’s most guttural and menacing bands in ‘80s. Their single “Walking About" is one song we have all blasted since we were teenagers. It is a fucked up mess of growled vocals, free jazz drumming, scratched out guitar and messy, demented Australian punk. Music at its most self-destructive and mean-spirited.

2. Coloured Balls - Ball Power
A classic Australian record of no nonsense, hard boogie rock. For fans of 1970s Melbourne Sharpie gangs beating up long-haired burnouts. The grunt of “Something New” and 10-minute boogie stomp of “That’s What Mama Said” are the highlights. Another band from the same era that is as good if not better are Buffalo, with wilder riffs but definitely not as wired. Coloured Balls would serve as the soundtrack to Neddy Smith doing a workout in the Long Bay prison yard.

5. Pussy Galore - Sugarshit Sharp + Exile on Main Street
Pussy Galore are perhaps the band which I love and loathe more than any other band. They are as violent and vitriolic as they are pretentious and self-conscious. They have upper middle class instincts, which we relate to. This EP and LP sees Pussy Galore covering Einsturzende Nuebaten (Yu Gung) and Rolling Stones most drug-addled, yet pronounced, musical statement (Exile on Main Street).

6. Feedtime - Feedtime + X - X- Aspirations
Two of the most venomous Australian records ever made—the ugly cantankerous end of Australian rock. Both Feedtime and X were from Sydney and both bands unintentionally attracted ruthless hordes of thugs and skinheads to their shows in Sydney in the 1980s. Both of these records are harsh and pissed off, yet steeped in a subtle humor only Australians really understand.

7. Les Rallizes Dénudés - Le 12 Mars 1977 À Tachikawa + Chris and Cosey -Songs of Lust and Love + Throbbing Gristle - 20 Jazz Funk Greats + Thug -Mechanical Ape/Proud Idiots Parade
Considering most Les Rallizes Dénudés records are based on the same five progressions—it ain’t that heavy to pick a favorite but 77 was the first LP of Dénudés I stumbled across so it gets the pick. Japanese psych at it most freewheeling…White Light White Heat for those who thought that LP wasn’t crude enough or Fun House taken to most illogical extreme.

Chris and Cosey’s Songs of Lust and Love and Throbbing Gristle’s 20. They are both albums are beautiful electronic records and to my ears only employ human emotion as a vague theoretic construct, which they manipulate and exploit.
Thug’s album is a different beast, a wild, spewing album of thrusting noise and sound manipulation. Thug were a band from Sydney Australia featuring the usual criminals from Lubricated Goat, Salamander Jim and Beasts of Bourbon (Black Eye Records finest exports). If you wanna hear Australian noise made by men who think with their fists and dicks and are as lyrically retarded and musically hateful as Whitehouse and sonically confused as The Residents, then Thug is for you.

8. Stooges - Fun House + Roky Erickson and The Aliens - Evil One
These two LPs are animalistic and malevolent masterpieces. Both records were made in the space of a decade. Only an asshole would say Fun House is an obvious inclusion. These two records by Roky and Iggy and Co. are drug-damaged, instinctual and forthright in the song craft captured on tape. Both LPs are as potent and relevant today as they were the day they were released.

10. Johnny Thunders - So Alone + Scientists - Blood Red River
I never liked New York Dolls so I never thought much of Johnny Thunders until I heard this record. There is something obviously beautiful about “You Can’t Put Your Arm Round a Memory,” “Subway Train” and “Leave Me Alone.” And the title track “So Alone.” I don’t really buy into Thunders’ legacy much and deplore Thunders clones but did he really get killed in New Orleans for a burrito and some methadone? Either way Phil Lynot from Thin Lizzy plays on this record, which is weird and cool. Scientists’ Blood Red River is a record by a band from Perth, Australia released in 1983. It is one of the sleaziest records ever made. It’s really grimy Australian swamp rock that stinks of gooey sweat, domestic violence, obsessed romance, staying awake for a week, $400 a fortnight on the dole. It’s a record we used to listen to a lot at parties at our house but haven’t listened to in a few years but are listening to it right now. It’s ugly Australian underground. 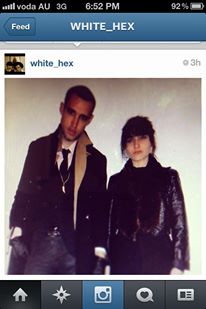 Q. How do you feel playing live?
Nervous, distant, apathetic but concerned that the sound is immaculate. I would prefer to never play live.

Q. How do you describe White Hex sounds?
It is in a state of change, the first record was very representative of our lives at that time, it is a beautiful wash of drugstore cowboy balladry but now the songs are more summery, I want to write synthetic ballads.

Q: Tell us about the process of recording the songs?
We recorded 'Heat' in a day in a cold Berlin room with Olle Holmberg, who I dare say is as close to a genius if I have ever met one. He is one of those people who when the apocalypse comes, you would want to be near. Our second album, which we are just finishing, we recorded it with Todd Dixon and with producer Alex Akers (Forces). Alex is a genius in that he can actualise every sound in my head. We are currently mixing the album which should be finished soon. 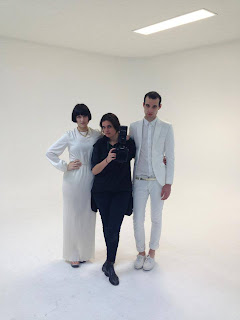 Q: Which bands you love to made a cover version?
We always argue about a song to cover. We have never decided on one. We make suggestions to each other and they inevitably get shot down for being too difficult, obvious or not really serving the purpose of interpreting an old song in a new way. We will cover a song one day when we agree.

Q: What´s the plans for future….
I actually have no idea aside from releasing this new White Hex record and touring America and Europe. I think that is all that is on the cards at the moment.