Ghost Riders with The Road To Suicide - An Interview 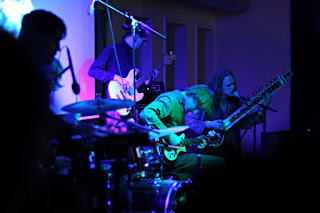 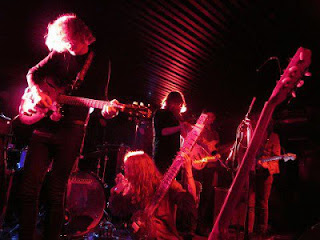 Q. When did The Road to Suicide start, tell us about the history....
We started back in 2011. During summer, our drummer Jens hosted a DIY-festival far away from civilization, where spaced out people and experimental musicians from the local scene had a chance to present their work for other artists.

Niclas (leadsinger and guitarist) had a bunch of songs, but no band. He was asked if he wanted to play at the festival and a month before it had to take place, a band was formed. The rehearsals had been so intense that The Road to Suicide was going to headline at the festival saturday night. The gig went beyond expectations, so we decided to continue playing together.

Michael joined on organ and percussion a half year after the concert.

Kristian joined on guitar, november 2012, as one our guitarists went to the northern part of China, to train Kung-Fu.

Q: Who are your influences?.
Roads and suicides.

Q. How do you feel playing live?.
We are a live band much more than a recording band. It's intense when playing live. Like a parallel bubble where time and space is raping each other. We are really inspired when playing under the sun, with people we haven't met before. Like when we play in the streets, which is a thing we tend to do a lot.

It always gives us a lot of energy that lasts for weeks! We try to play as much as possible, not necessarily in front of a crowd, as the value of the introvert experience is the thing that we are going for.

Q. How do you describe The Road To Suicide's sound?.
One of our friends told us that there are many layers of details, that gives each listener a unique experience. You don't only pick the melodies that are being played, actually you make your own melodies and harmonics from the resonating overtones. We like to work with these chaotic tendencies to give the listener a blank canvas where they can paint their own soul. There are many sources of sound, that we try to sew together in a wall of sound. And of course, we are playing loud. Very loud.

Q: Tell us about the process of recording the ep?.
We started recording one week before our organist had to move from his appartment. It was a great place for recording, because the building was placed on the outskirts of town, where we could play really loud. It was a kind of shitty setup, but we managed to make the best result out of it. We isolated all the amps in different rooms and played together in the living room. We recorded 5 songs and had to dump two of them. When we had to record the vocal for "Sleepers", Niclas was really high and drunk. He wanted to sing in a dark room, so we put up a microphone in the bathroom, turned off the lights and closed the door. He destroyed 3-5 bottles of beer during the vocal recordings. Afterwards we made some overdubs at different locations, where we added violins, theremin, didgeridoo, and percussion.
The EP was mixed in 4 months and then it was ready for release. 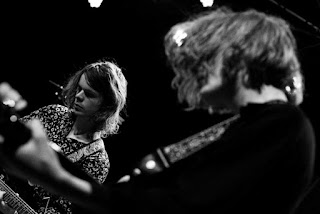 Q. Which new bands do you recommend?.
We saw a brilliant concert yesterday with our label mates The Hedgehogs ( http://www.youtube.com/watch?v=YfYIEPSFLao )

It was mind blowing and we deeply recommend this band. Their constellation has changed from 4 people to a massive rock band consisting of 6 people. It's a holy number of musicians in a band.

And of course Spökraket - the worlds most democratic band. ( http://www.youtube.com/watch?v=3y44o-AQo1Q )

We just released a 12" split with them, and we've been playing a bunch of concerts together.
Also, we are trying to establish a community through Levitation Records. It's a small independent label from Denmark who are really supportive. They believe in the music and artistic value of their bands, and we are really proud of working with them. We deeply recommend listening to all the acts from the Levitation Society. http://levitationrecords.dk/

Q: Which bands would you love to make a cover version of?.
The cosmic singing of planets, birds and oceans. We don't enjoy playing cover versions as much as we love to compose our own music.

Q: What´s the plans for the future.....
We are gonna make a full-length album as the next step. As well as playing outside Denmark. This summer, we seek isolation in a big storage building at the countryside, so we can try to play in different rooms, do some field recordings as well as approach the project in new ways. It is very important for bands not to be bound to a genre. The gifted musician gets rid of all his habbits, and is willing to accept movement whether it is aesthetical, stylistic, or philosophical.
*
*
*
Thanks guys