Fascination Streets with Wonky Doll and The Echo - An Interview 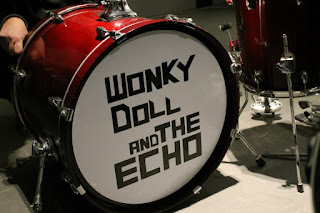 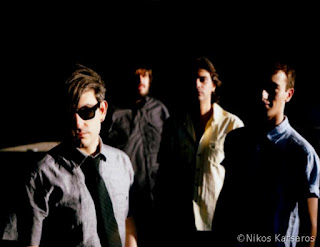 1. When did Wonky Doll and the Echo start, tell us about the history...
George Lemons: Wonky Doll and the Echo were formed in 2010 when YIOS (plays the bass) and me created a few songs we actually liked, hence we decided to form a band. By that time we met Kostas, whose part is to play the synth and occasionally the guitar. That is when we started playing with the help of a drum machine and this is how we first performed live on December 2010. However, we decided that we preferred a more solid, strong sound which could be formed with the addition of the drums. This is how we found Octapus, who proved himself really capable of performing the quite demanding drumming samples we used to have. After a while we became a solid team all four of us.

2. Who are your influences?
George Lemons: We are inspired by the late 70s and 80s underground scene, but we also got references from even more back in time, such as David Bowie or Velvet Underground, or the first electronic sounds in the 70's (like Kraftwerk) or surf sounds from the early 60s and rock 'n' roll. You can also add the more popular 90's indie scene and today's shoegaze and alternative scene, so as you can imagine, there is a lot of diversity in our sounds, which is obvious in our work as well.

3. Make a list of 5 albums of all time…
George Lemons: I change this list every day. Today, my top 5 albums are: Dead Can Dance (by Dead Can Dance), Music for the Masses (by Depeche Mode), The Velvet Underground & Nico, Idiot (by Iggy Pop) and Low (by David Bowie).

Kostas Antonakoglou: A lot of albums deserve a place in that list, but here it is: Wish you were here (by Pink Floyd), The Doors (by The Doors), Closer (by Joy Division), Exit (by Tangerine Dream) and Coltrane's Sound (by John Coltrane).

Octapus: This is a list of albums I love listening from start to finish: Another perfect day (by Motorhead), Calling Card (by Rory Gallagher), Blade Runner (by Vangelis), Outlandos d'Amour (by The Police) and Remain in Light (by Talking Heads).

YIOS: Here is my list: Dark Side Of The Moon (by Pink Floyd), Man Machine (by Kraftwerk), Pornography (by The Cure), Ashes (by Christian Death) and Telson (by Stereo Nova)

4. How do you feel playing live?
Octapus: Actually this may seem a little strange, but I actually feel like I become invincible just to find this secret door to unlock it. As soon as I get in everything starts to float, so, space and time are irrelevant to me. Of course when I stop playing everything comes to normal, but the greatest part is that I can do that again.

YIOS: A mixture of feelings seizes me. I always have a little stress, which goes away on the very first seconds of our first song. I like to observe the audience while playing. The way they listen to us or dancing sometimes, excites even more. Every time we play our last song, I always say "I wanna play more".

6. Tell us about the process of recording the album?
YIOS: We had decided that "Pleasant thoughts" would be “our child" in all levels. So, we are talking about a DIY production. It was recorded at George's house, and to be more specific, in his bedroom. We customized the room to meet our needs. It was crucial that we had all necessary equipment. We spent several hours each day over the two months that the whole process lasted. I think the hardest part was the production, which was mainly made by me and George, but the result is what we really wanted from the start. 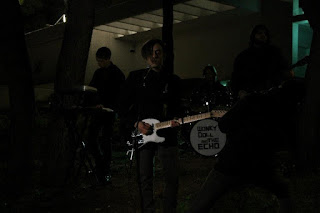 7. Which new bands do you recommend?
Kostas: The names that pop out in my mind right now are Tamaryn, Savages, The Soft Moon, No Joy and Miyazaki. They all have cool songs.

8. Which bands you'd love to make a cover version?
YIOS: That's a tough one. Making a cover of a favourite song is tricky. You need to adapt your own sound to the particular song. That's what makes a good cover, in my opinion. Nevertheless, I'm not against trying such a thing.

9. What are your plans for the future?
Kostas: The truth is that we love doing gigs. We always try to have a full schedule and we can't wait to start touring. We hope we'll have the chance to do it soon. There are a lot of unreleased songs in our hard disks, old and new, and we are about to start making a new demo. You can always learn our news on our website and our social newtwork pages.

10. Any parting words?
Wonky Doll and the Echo: We hope you'll enjoy our new music video...Take care!
*
*
*
Thanks Guys