Victorialand with Ummagma - An Interview 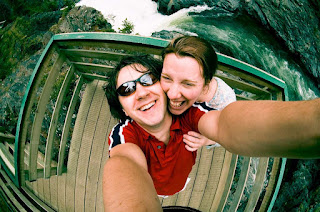 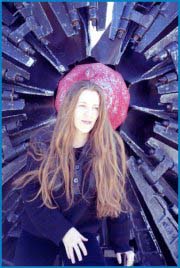 Q. When did Ummagma start? Tell us about your history...
Alexx – On my part, Ummagma pretty much originated when I accidently annihilated our radio at home when I attempted to plug my electric guitar into it… Something magic in that moment.

Shauna – Well, that’s not my story, while it rings true for Alexx, because that was like plugging the stereo in to the socket and just waiting for the right moment to turn it on. The right time for that came in Moscow when we hooked up (literally) and finally gave each other the time of day musically because we hooked up (funny, it usually works the other way around). Neither one of us took each other seriously as musicians until we decided that it could be a good way to spend time together – and it just took off from there.

Q: Who are your main influences?
Alexx - All that I see, hear and feel goes through my mind. Then my consciousness determines which of these thing hold any personal value. It’s through such a filter that I let things into my heart and I reflect what’s happening in the world and talk it over with my friends. That’s the way it happens with music too – I don’t compose it in the traditional sense, but rather find it in the language of my heart – these are the sounds and the music that I love most.

Shauna – Well, that’s generally how it works with me too, but I’ve got a critical mind so I soak up a lot of stuff before I finally spurt it out and that’s how it happens with the lyrics. I promised myself that I need to be in a positive headspace when writing lyrics, and that means connecting with my higher self I suppose. The melody comes from above in any case, so I definitely don’t attribute that to anyone. What I can definitely say is that the loveliest music I’ve ever heard (in my own personal view) has to be music created by and connected to the Cocteau Twins and David Sylvian.

Q. Who would be in the list of your 5 favorite albums of all time?
Alexx – Its really difficult to answer about concrete albums. There’s just so much goodness out there. I can only mention the music that has affected me deeply – J.S. Bach, The Beatles, Bob Marley, Pink Floyd and Celtic Music.

Shauna – I bet Alexx would also like to add Joe Satriani if he could list 6 influences. For me, I also can’t limit my answer to specific albums, but I can speak of artists who I adore immensely. Among them are the Cocteau Twins, David Sylvian, the Cure, the English Beat (only known as The Beat in the UK) and Radiohead. Of course it all sounds better on vinyl, but that’s not always possible. 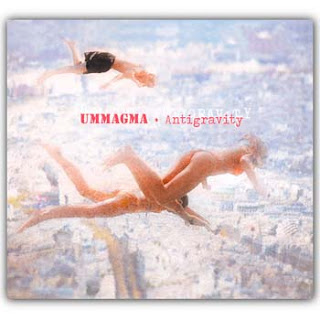 Q. How do you enjoy playing live?
Alexx – Until now, we have primarily been investing ourselves in composing and recording music and there’s many reasons for that. This approach has offered us definite advantages as opposed to focusing on live performances and such experiences in the studio are rather diverse, which is attractive for me.

Shauna – We’ve been as intimate with the music as we can get through our work in the studio, so that’s been our focus so far. Even so, we aren’t ruling out the possibility of performing a bit in the near future, at least on a more local or regional scale, but the studio will still take the spotlight for us.

Q. How would you describe Ummagma’s sound?
Alexx – It’s like musical landscapes of a sort, like a series of self-portraits or heading on a journey of sorts with every single song, only with very good seats. I know that the music’s form prevails, but maybe we will manage to meet with and find useful companions through this music, as if engaging in gratifying conversation.

Shauna – I try to be a bit more pragmatic when it comes to defining our music because many musicians love to claim “we can’t be or must not be categorized”. Why not? People love labels or tags that give them a point of reference. So I’d say our music is ‘hexagonal’. I mean, our music is rather diverse but can be found in a space somewhere between six key pillars: dreampop, ambient/ethereal, post-rock, post-punk, shoegaze/nugaze and progressive rock. Some people say we are beautifully schizophrenic, musically speaking and I think they’re not far from the truth there, but who wants to live in a box? The musical mind certainly doesn’t… I love it when people point out the folk element, stemming from my Celtic roots or Alexx’s Slavic roots. I guess I see that somewhat in songs like “BFD”, “Balkanofellini” and “Beautiful Moment”, but I don’t see it as a strong influence, perhaps because I’m in the middle of this experience – still, it’s wonderful to understand how others perceive and internalize this music.

Q: Tell us about the process of recording the new album.
Alexx – Shortly after we met, we started living together in a small rented apartment on the edge of Moscow. We finally got a computer and I installed Cubase and, using an inexpensive microphone, we recorded everything we used to play in the kitchen. We also had a guitar amp, a midi keyboard to play sounds through the PC with a Halion sampler, and some libraries with a mass of accumulated sounds we never previously had.

The process of our initial recordings was so exciting that I’ve had the fortune of letting this thrill continue. We have moved many times – between different cities and even countries – but we have always kept several key things with us: at least one microphone, our guitars, at least one laptop and a sampler. Recently I put together a recording system based on Pro Tools Mix 24. We have classic FX units such as Eventide and Lexicon. We have good dynamic processing equipment, which doesn’t always have to be top class. We use U87, EV re-20, re-15 and 666 microphones, as well as some classic Shure and several “Russian beauties” from Oktava. We were among the first to use the Roland RC-50, which is an amazing tool that allows you to capture some pretty amazing sounds. The recording process entails superimposing one instrument overtop another. I tend to use both old hardware and new native tools. I often beat out the drum parts with my fingers through PadControl or combine this with samples and, not infrequently, I also use an analog Rhythm Box. The midi editing is handled in Logic, using a simple synchronization with Pro Tools, because the Pro Tools Mix 24 works fine with audio but works too modestly in regard to midi. We only ever use plugins as an edging filter or surgical EQ.

I do all the mixing and mastering for our own songs. Well, maybe that’s not entirely true, since there exists the perception that a mixing engineer’s ears are radically different from those of a mastering specialist. Despite this, in some cases, I think it is important, where possible, for someone to see the music you have made through to the end.

Q. What represents the shoegazer classic era to the band?
Alexx – Shoegaze is an offshoot branch of the psychedelic genre and, in my opinion, it’s quite a self-sufficient genre all on its own. Of course, I love both!

”In a churchyard by a river

Lazing in the haze of midday

Laughing in the grasses and the graves…”

Shauna – I was more into shoegaze in the early 1990s and I’m glad to see a kind of revival happening these days, but the most attractive thing for me is the fine line this genre shares with dreampop, and both of these terms were slapped on a lot of bands post-factum anyways – take Cocteau Twins, Dif Juz and Jesus & Mary Chain for instance – in their heyday, nobody was saying “Oh, they’re shoegazers”, but now we are. Really, Cocteau Twins, Slowdive, Ride, Chapterhouse, House of Love and some (but not all) My Bloody Valentine mark the epitome of a lovely lacey shoegaze/dreampop that I personally identify with.

Q. Which new bands do you recommend?
Alexx – I must admit that, since 1995, I generally look on the music I prefer as one huge compilation for an intangible yet pronounced record. The content of this collection is growing and everyone is producing music that is unique in its own way and no less beautiful than other bands’ music. You cannot really embrace that which is non-embraceable, but you can do your part to help the best of this massive collection to reach other listeners more often.

Shauna – I appreciate Foals, the Arcade Fire, Her Vanished Grace, Echodrone, Drowner, Jane Woodman, Chatham Rise, Clarence Mayhew, All American Girl, The Volta Sound and Blonde Redhead. More and more I am finding that I enjoy music created by my friends’ bands and that net keeps growing wider. I quite appreciate some very talented East European bands right now – mainly shoegaze, borderline psychedelic rock and dreampop – including such bands as Nameless, Aerofall, Echo Gardens, Sounds of Sputnik, Plastic Drops, Suffering Astrid, Red Cardinals, BeBoBul and Zapaska. We both love Ivan Smirnov, Art Ceilidh and Boris Grebenshikov from Russia – they are not necessarily new bands, but they will be new to the West. I am also enjoying some South and Central American groups that I’ve recently been introduced to, like the Cleaners, The Concept, Robson Gomes’ solo project (Robsongs), Space Mantra, Joaquim Barato and Bela Infanta. I think that Eastern Europe and South/Central America are going to surprise the world very soon, musically speaking. 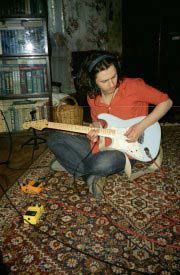 Q: Which bands do you like to do cover versions of?
Alexx – Actually, we really don’t play covers, professionally speaking.

Shauna – However, just for fun, Alexx does a nice version of the Smiths “Please, Please, Please, Let Me Get What I Want”. I always figured that if I were to do a cover, it would be something from Split Enz or something traditional. That’s the Celt in me calling.

Q: What are your plans for the future?
Live happily, live fully and record plenty of new music. Everything else is just details…

Q: Any parting words?
Thanks very much. We are honored that you have bridged this gap between Ukraine and Brazil and all your readers wherever they may live. Peace!
*
*
*
Thanks Ummagma