New Wave with Dialogue From A Silent Film - An Interview 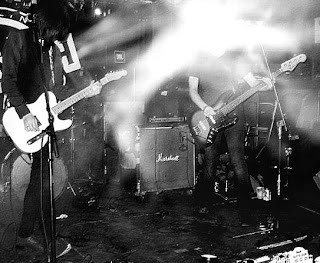 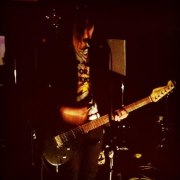 Q. When did Dialogue From a Silent Film start, tell us about the history...
Daniel - I've always been writing songs, whether it was while riding trains, staring at the fluorescent lights of hospital waiting rooms, or waiting to get off a plane, so eventually I wanted to play them. These guys came into the picture late 2011. We are Dialogue from a Silent Film - Daniel Kasshu on vocals/ guitar, Brian LaRue on bass/ vocals, Jon Chapman on drums and percussion. Everything is great now.

Jon - I actually met Daniel through a musician forum on the internet when I first moved to NYC. without knowing anything about the guys, I met them for an audition. it sounded great and nobody tried to rape me, so I joined up!

Q: Who are your influences?
Brian - I have a lot of influences, but playing bass with Dialogue, I keep coming back to Peter Hook (Joy Division/New Order), Clint Conley (Mission of Burma), Mike Watt (The Minutemen, etc.), Craig Bell
(Rocket from the Tombs) and Spector's Wrecking Crew. Also, I've realized it's taken conscious effort to avoid simply copying the bass line from Black Tambourine's "Black Car" every place it might possibly
fit.

Jon - My dad used to be a drummer and he had the biggest influence on me growing up and learning to play music. Musicially speaking, I've got one foot in the prog rock door, one in the jazz door, one in funk, a little latin, some classical training.. Lots of stuff! And of course all the musicians and bands I've played with.

Daniel - Influences are wide and varied. I can guarantee, though, that at most times I am certainly under the influence of something or other.

Q. Make a list of 5 albums of all time…
Brian - My "Top Five Desert Island" discs would probably have The Zombies' Odessey and Oracle, The Kinks' Arthur, The Smiths' Hatful of Hollow, The Stooges' Fun House and I don't even know what the fifth
would be -- maybe a good recording of Bach's Magnificat in D or maybe whatever my favorite Elvis Costello album is at the time or maybe Black Flag's Damaged. I can't make a list of what I think are the five
BEST albums ever, straight-up. I need to listen to more albums.

Jon - I'm sure my list is very different than others, but here's three albums that I've obsessed over at one point or another - Genesis - The Lamb Lies Down on Broadway, Wayne Shorter Quartet - Footprints
Live!, Soul Coughing - Ruby Vroom.


Daniel - My Bloody Valentine - Isn't Anything, The Make-Up - Untouchable Sound, David Bowie - Scary Monsters, At the Drive-In - Relationship of Command. The fifth album is a giant question mark, I think. It would have to be more important than the other four combined.

Q. How do you feel playing live?
Daniel - Sweaty. Uncomfortable. I've never been a fan of bright lights, or light in general. I think I'm a little out of my element,so I just take it out on the guitar. Occasionally, I break it by the
end of the set.

Brian - Playing live is the reason why I play in bands. It has a narcotic effect. When I have long stretches between performances, I feel anxious and depressed. Playing bass with Dialogue is really exciting in a live setting. Jon is a very gifted and versatile drummer, and it feels great locking in with his kick drum and just
digging into my bass, wailing on the beat like it owes me money. Plus there are all of these more melodic or more delicate passages I play with Dialogue, and I like how that engages a different part of my brain than the "rhythm beast" part. In a live setting, all three of us give the impression that we believe in ourselves, and I think people in the audience tend to notice that and respond positively to it.

Jon - It depends. Sometimes everything comes together and it's like the music is playing itself and I just let it happen. That's the real magic, when you just let go and suddenly start playing shit you didn't know was in you and you're like, "Wow, did I just do that??" Other times, if the sound is tough, I just gotta focus on playing everything with good time and conviction, even if I'm not feeling it.

Q. How do you describe Dialogue's sound?
Brian - Melodic post-punk wearing a shoegaze jacket.
Daniel - Dialogue has two sides - studio and live. Live, we're loud. More aggressive than you may think. We tend to have quite a bit of restraint in the studio because we concentrate so much on dynamics and
perfection. On stage there's the combination of kinetic energy, the electricity in the air, the reaction of the audience, and some degree of inebriation that give way to us unleashing some reckless abandon Literary references and layered metaphors can still be abrasive. Dress a punk in a suit and he's still a punk. 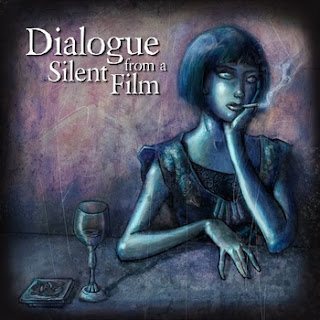 Q: Tell us about the process of recording the new album?
Daniel - I began writing most of these songs in 2010, and they've all kind of grown since then. My friend and the band's producer Peter Mavrogeorgis (Sharon von Etten, The National) heard some early versions of a few of the tunes and we went into the studio shortly thereafter.

It was all long nights, sweaty days, trips out for coffee, and take after take after take. But, Dialogue from a Silent Film has a body of work that we're really proud of now. Over the next few months keep an eye on our facebook and bandcamp, we'll release it and you'll get to hear why.

Jon - I came into the group late, so most of the tracks were finished. I rerecorded some older drum tracks and played on a couple new tunes. So a few of the tracks on the album are me playing, but there are others with different drummers also  For my drum parts, I'll listen to the song and get an idea of what I want the drums to sound like. Then I'll tune them and the engineer andI will talk about cymbal choices, mic positions, and effects applied to the drums after the recording.

Then I'll record to a click track, and that drum part becomes the foundation for the rest of the instruments.

Q. Which new bands do you recommended?
Brian - I don't even know who's new anymore. Among bands here in NYC, I like to go see bands made up of people I know who are also really good at music. So, those would be, like, EULA, Fake Babies, The
Planes, Slam Donahue, Wojcik, Gold Streets, Clouder, Life Size Maps, Clouty... A lot of those bands aren't actually new, but they're all doing new things, and none of them are famous.

Jon - I'm sure there are good new bands out there. Alas, I haven't heard any! I mean, there are some bands doing great stuff, but as far as stuff that turns me on, it's been a while.

Daniel - I have a hard time finding new bands to listen to ever since independent rock in NYC became totally dependent on who does your hair, whose clothes you wear, whose table you drink at, and what
scene-trash of the week you're sleeping with. Where did the music go? That much said, we've actually shared the stage with some bands keeping rock and roll alive for real such as Kids at Risk (from
Australia), Sursum Verbo (from NYC), Farewood (from CT), The Tennis System (from DC/LA), and a few others.

Q: Which bands would you love to make a cover version?
Brian - The Monks (though I'm not sure if Dialogue is the right band for that) or early Pere Ubu.

Jon - "Machine Gun" by Jimi Hendrix, "Love is a Battlefield" by Pat Benetar if I got the electronic drums right. If I had a horn section, I could make a rockin' arrangement of the Ghostbusters theme song.

Daniel - It would be really fun to cover Japan, Strawberry Switchblade, or Kas Product. It seems more likely, though, that we'd cover Shiina Ringo. Or not. I don't know. We have so many songs to put out and so many upcoming releases, I can't even imagine having the time to do a cover, aside from the b-side of our debut single.

Daniel - I plan to begin chain-smoking even while I sleep. It's part of my self-improvement regiment.