Sweetness and the Light with Drowner - An Interview 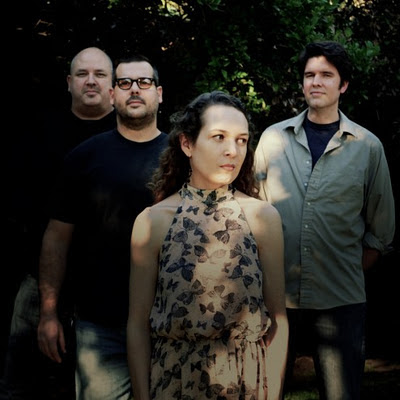 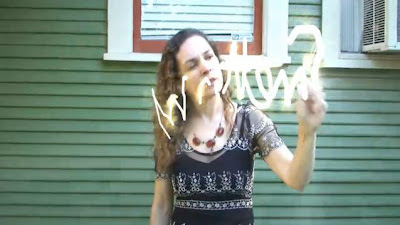 Q. When did Drowner starts, tell us about the history...
Darren: After releasing Swimming In in 2008, I became more interested in guitar textures, especially a kind of distorted, reverb sound I was experimenting with, and I wanted to expand on that and write songs with it. They naturally had a sort of shoegaze/postrock sound, because of that effect, mainly, and I wrote probably ten or fifteen songs that way, just playing with it. At some point in 2009 or early 2010, I'd added drums and bass, and I started thinking about finding a singer. After some failed Craigslist sourcing, I mentioned to Anna (who was working with me on some video color correction) that I was having a lot of trouble finding the right singer for the project. I kind of threw it out there: Would she like to take a crack at it? And, she said yes. She turned around a first draft of one song, and I heard a lot of potential in it, and so asked her if she wanted to be in a band.
Anna: Yeah, everything just seemed to come together. We sent files back and forth via the internet and collaborated on a handful of songs, and finally they started to really mesh, and it looked like a release was possible. We'd progressed, at that point, to writing few new songs together. Mixing began in the spring of 2011, and by June, we had an EP ready for self-release via iTunes, etc. The response to the EP was really positive, and so we decided to keep the momentum going and track a couple of songs for another release, this time a single and B-side. In September, another longtime friend of Darren's, Sean Evans, joined the band on 2nd guitar, and not long after that, Mike Brewer stepped in on bass. Around this time, a few labels were expressing interest in signing Drowner, as we had dubbed ourselves (after the title of a song that we were working on), and SMR seemed like a great fit. We have been really, really happy with that choice.
Q: Who are your influences?
Darren: For me, I'm interested in texture and connecting that with dynamics and emotion, so I appreciate a lot of bands like Hammock, Explosions in the Sky and This Will Destroy You. There are a few bands from the late 80's and early 90's that figure in, as well, and often for the same reasons. The first Verve album, the last two Talk Talk albums and Distintegration by the Cure all share a kind of dynamism, emotion and grandeur.
Anna: “Dynamism, emotion and grandeur” is exactly what moves me, as well, and so I would add to the bands that Darren mentions Mogwai and Sigur Ros, and also the work of Siouxie Sioux, Bjork and Kate Bush. I also find I have a subtler and down-to-earth side that gravitates toward bands like R.E.M. 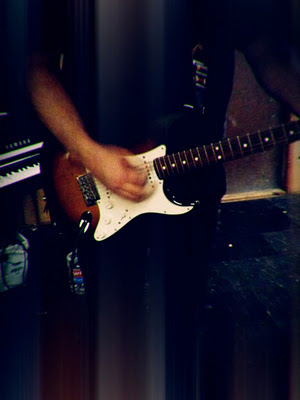 Q. Made a list of 5 albums of all time…
1. Spirit of Eden-Talk Talk
2. Disintegration-The Cure
3. Astral Weeks-Van Morrison
4. Ágætis byrjun-Sigur Ros
5. Velvet Underground and Nico
Q. How do you fell playing alive?
A. We both agree that we feel very alive in those moments.
Q. How do you describe Drowner sounds?
A. Almost indescribably big. Enveloping, delicate, thunderous, layered, inarticulate or ineffable, overwhelming, shimmering.
Q: Tell us about the process of recording the debut album?
Darren: Most of the songs start with a sound on guitar. I’m always listening for a new sound as I'm experimenting with different effects and signal routings. A lot of times, the guitar signal is split into two or three to run separate paths through the gear. I use a rack amp and the speaker cabinet from my Rhodes along with a Space Echo for a lot of it, and then route a mic signal from that through pedals. Another signal might pass through a computer running a series of delays, reverbs and distortions, and then another signal through a grain delay or through the V-synth and vocoder. Sometimes it all goes to tape, and sometimes it gets put back through the chain again with a different configuration. For the newest material I'm using more layered chorus pedals and tremolo, so there's a more distinct, drier channel on top, but the background wall of noise is always there. Luckily by splitting the signals we can pretty much duplicate the sound live.

Anna: Typically, Darren will send chord progressions and demo arrangements to me to listen to. I write lyrics for them and compose the initial vocal melodies. Then, Darren takes what I have written and makes adjustments to the guitar parts and the arrangement to reflect my choices. One area in which we have entered into a lot of collaboration is that of my vox harmonies. It used to be that I would send one or two harmony lines with my initial vox melodies. If we needed additional lines, they were often improvised in the final recording. That led to the two of us sorting out some really effective vox harmonies in the studio, on the dais. And so now, we like to write them more progressively from the outset and in tandem, sorting out what fits most tightly into the final arrangement, while still reflecting how I feel I should sound in the blend. A lot can be said for writing spontaneously together in the room – we do work in that way, sometimes – but we like the results we get from working dynamically in stages, too. So it seems that the one ends up feeding the other, most often.
Darren: By this time, Sean and Mike are listening to the demos and figuring out their parts, and I'll record them. Eventually, the vocals are rerecorded, and overdubs, if needed, are done, and then it's mixed. We're using a hybrid method of mixing this record, with stems being done in the PC, and then the stems are mixed down to two tracks on a Topaz desk to tape. In this way, we get a little of both worlds. I like the bigger sound of hardware, and the EQs on the Topaz are nice, and I think we're achieving a nice wide sound. 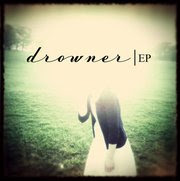 Q. What´s represents the shoegazer classic era to the band?
A. Ride-Nowhere probably best exemplifies the classic era to us.
Q. Which new bands do you recommended?
A. We're really into Exitmusic, The Fauns and SPC ECO right now.
Q: Which bands you love to made a cover version?
A. We would love to cover Straitjacket Fits, R.E.M., Talk Talk, The Cure. We hope there will be some great covers in our future. 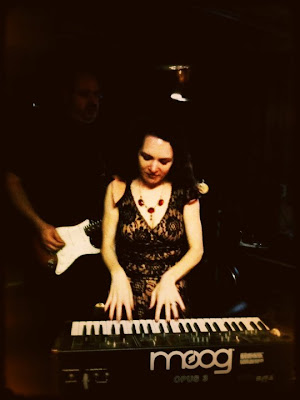