Shoegazer Archives with Grabbel and The Final Cut - An Interview 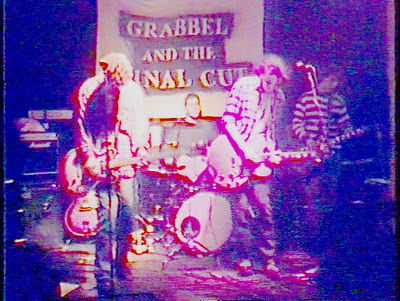 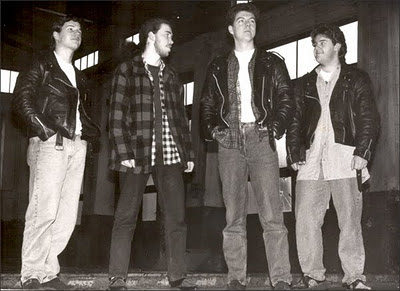 Q: When did Grabbel and The Final Cut start, tell us about the history...
A. The band was formed in 1989 in our hometown Lüneburg in Germany, which is a smaller city close to Hamburg. We weren't really musicians, just friends who loved the same kind of music. We figured out how to playour instruments by trying to play cover versions of our favorite bands. But that didn't work out too well and so we started writing our own tunes.
After a few months we had our first gig in a nearby club, the Wahnhof in Bardowick. The owner of the club, Ture Carstensen, wasn't really sure if he should let us play, but somehow we managed to persuade him. And when we played our very first concert, the venue was packed! Somehow everyone brought his friends, and friends of friends. There were more than 200 people, and Ture was so happy, selling lots of drinks and stuff, so that from then on we could play there whenever we wanted (and we did a couple of times in the following years). So the Wahnhof was something like a second home for us, we used to hang out there at nights and became good friends with Ture.
The sad end of the story is that the Wahnhof building got torn down in 1992. The autobahn from Lüneburg to Hamburg took its place...
Q: Who are your influences?
A. When we started the band our biggest influence of course were the current bands we listened to at that time, at the end of the 80s, like The Smiths, The Jesus And Mary Chain, The House Of Love and My Bloody Valentine (yeah, this was before Loveless came out...), plus some older stuff like Joy Division / New Order, and maybe most important: The Velvet Underground. When I heard the first Velvets album, this was like a revelation. I suddenly realised that you don't need great musical skills, as long as you have great songs.
Q: Make a list of the 5 best albums of all time...
A. Well, I can only speak for myself, as the other guys in the band would surely name some other albums, but mine are..., hmm..., all time? Tough decision..., maybe these (in no particular order):
"The Velvet Underground & Nico" by The Velvet Underground
"Tommy" by The Who
"All Mod Cons" by The Jam
"The Queen Is Dead" by The Smiths
"Psychocandy" by The Jesus And Mary Chain
Q: How do you feel playing live?
A. Playing live was always great, we enjoyed it very much. On a good day there's some kind of really positive interaction between the band and the audience, and the music is the link between the two. On a bad day however, it can be a real disaster..., but we only had that once, when we played in some small village in Bavaria, southern Germany. The people there were expecting some different kind of music, obviously..., they started yelling at us, and we were yelling back from the stage..., in the end we had to leave the location through the bathroom window, haha!
Q: How do you describe Grabbel and The Final Cut sounds?
A. Er..., once back in the day, when we sent out some information about the band to the local daily newspaper, we wrote that we're doing "noise-guitar-psych-pop". A few days later there was indeed an article about us, but the heading read: "Psycho Pop from Lüneburg"
So I'm not going to make up some new term for you now, else who knows what you'll come up with...? ;-)
By the way, after this "Psycho Pop" article I decided to rename a song I had just written. It was originally titled "Perfect Popsong" but became the "Psycho Popsong" then. 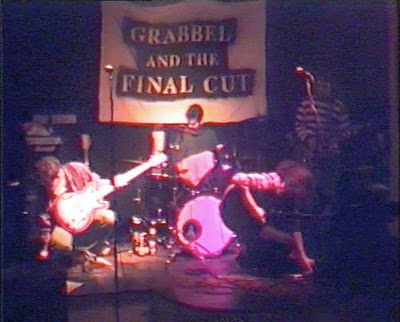 Q: Tell us about the process of recording the Get Your Feet Back On
The Ground EP...
A. Back then we recorded everything on cassette tapes. Ture, the owner of the Wahnhof club, had a 4-track cassette recorder we could kindly borrow from time to time. I can't remember the exact model, but I think it was an early TEAC cassette system. So this was cool, a real gift actually, because we didn't have to go to an expensive studio to record some rushed demos. Instead we could take our time with Ture's cassette thing at home, and it wouldn't matter if it took a few days longer than originally planned.
Anyway, we had one ok microphone (a Sennheiser-something) and one not-so-ok-but-fine-for-us mic (some SM58 copy), which we both used for vocals when playing in our rehearsal room. And when we had the 4-track cassette in our room we realised that we didn't have enough microphones to record the drums properly. We were really keen on starting the recording session, but alas, money was short. So we went downtown to the local Woolworth store to see what they got. They had cheap microphones and they had very cheap microphones. So we took two of each home, placed them where we thought they should be and made some tests with varying mic positions. And it sounded fine!

When I prepared the tracks for the forthcoming EP release now, I actually thought "wow! this sounds really good!". And it was recorded using these crappy yellow plastic microphones... True Lo-Fi, but the weird thing is that it doesn't sound like Lo-Fi at all.
Q: What represents the classic shoegazer era to the band?
A. That was a cool period. All of a sudden there were so many great noisy guitar-pop bands around. Before that, there were maybe a handful of bands that paved the way, like The Jesus And Mary Chain (of course!), The House Of Love and the pre-Loveless My Bloody Valentine.
But in late 1989 for me the "new bands" took off with the Pale Saints "Barging Into The Presence Of God" EP. I heard the song "She Rides The Waves" late at night on the radio and was blown away. Went to my favorite record shop the next day and bought the EP. Then came bands like Ride, Slowdive, Swervedriver and The Boo Radleys, and then Revolver, Moose and Catherine Wheel, and later on Adorable, who might be the last of the better known first-wave shoegazers. Or maybe shoegaze had ended by then already...? Hard to tell, but the scene faded in 1993 and somehow transformed into... Britpop!
Q: Which new bands do you recommended?
A. Well, these aren't exactly "new" bands, but of all bands I got to know in the past few years, I guess The Electric Soft Parade and Brakes made the biggest impact on me. They're both from Brighton, UK and they're sharing some band members, which is cool.
Best bands I saw live this year were Ra Ra Riot, The Joy Formidable and We Were Promised Jetpacks.
Q: Which bands you love to made a cover version?
A. That would definitely be the song "Flying Pizza" by Swearing At Motorists!
Q: What's the plans for future....
A. With the forthcoming Captured Tracks release of our Get Your Feet Back On The Ground EP in January, we're indeed thinking about getting back on stage again! So we've started rehearsing and we're currently planning some gigs in Hamburg and Lüneburg, and then I guess we'll see what happens...
Q: Any parting words?
A. Thanks to all the bloggers and everyone out there, who said such nice things about our music in the past few weeks. That was some really amazing feedback and it means a lot to us. And special thanks to Mike Sniper at Captured Tracks who made this all possible in the first place; without him our songs would still sit there on Bandcamp and Last.fm and rarely get heard...
*
*
*
Thanks Stefan!!!