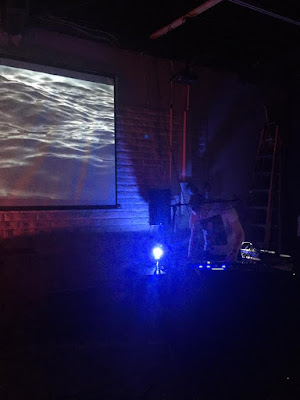 I wanted to get the feel of this rhythmic machinery just pummeling you because I was trying depict a character that is being obscured by the bombardment of propaganda and the modern news cycle of global crises. It’s this idea of constantly questioning yourself and being unsure of what is happening around you. In the middle of the song the line is, “Will you fall in line?” which could be translated as “Will you accept the new normal?” As an ‘animal with pride’ in his country, he definitely will. I was attempting to get to this idea of compliance with the powers that be due to not being able to determine what your reality consists of. I used a lot of pitch shifting effects and pedals to try to distort the song to leave the listener somewhat disoriented.

This song is from the point of view of the characters conscious, telling him that in order to solve your problems, you can just take the ‘hollow’ route. Now that you are disoriented and can’t really determine what your reality consists of, it is time to follow directions, follow orders, and completely sell out your values. This means a life dedicated to the chasing of money and capital. Greed dominates and you lose empathy for others. The ads worked, the powers that be have controlled your decision making. You may even skip voting because that doesn’t matter anymore. I wanted this song to shift parts seamlessly but not have any chorus to sort of amp up the bleak path he has chosen. He may even be dancing at the end, in some sort of dark joy at his new life choice.

This song was inspired by that moment when you start to figure out all of those political factors that you didn’t quite understand before and you are sort of in shock. The burden of being conscious so to speak. What this character figures out is that his voice and words are meaningless and his pursuit of capital was just a way for the powerful to screw him over. I wanted this path towards realization to be dark, but also with some beauty intertwined. At the end of the song, the ‘higher power’ comes in to tell him that he has stolen his possessions and it is no longer his. This, of course, leaves him disenfranchised, angry, and beaten down.

This song was special to me because after I recorded it, I was terrified. It literally scared me. I knew that had to be the title track after that. It was inspired by a moment in my life when I was asked to take communion in church when I was 11 years old. They said you have to confess and give your life to God, and if you take the communion without doing this, it is some sort of grave sin. I knowingly didn’t confess and ate it anyway in an act of defiance. I remember it vividly because I was terrified of displeasing everyone, but I knew I had to do it. This is a cathartic song where the unnamed character it calling out everyone, including himself, in a full realization that he has been manipulated, though it sort of feels like a weird dream. This is close to how I felt in church. He exposes the powers that be as a fraud and self-serving. The idea to ‘grow static’ and ‘know static’ is to understand what is happening around you, but to also pursue your own truth. Create art, speak out, pursue your goals, trust your conscious and intellect, and fight back with knowledge. I used the bells as a way to remind me of the church incident and how it was a turning point for me.
*
*
*
Thanks