Lutalica with Swanhoppers - An Interview 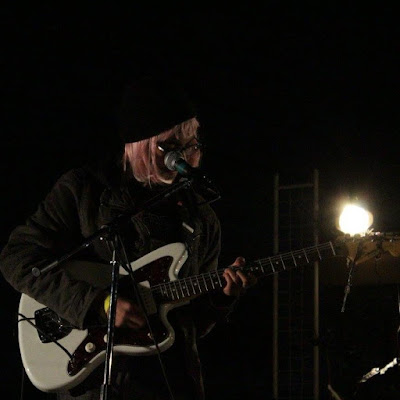 
Q. When did Swanhoppers start? Tell us about the history...
1. Swanhoppers is a solo project that started back in 2014. Before that, I was playing in a cover band with a couple friends until I decided doing covers wasn't my thing and started doing my own thing.

Q: Who are your influences?
2. My main influences would have to be My Bloody Valentine, Sonic Youth, Dinosaur Jr, Neutral Milk Hotel, and Elliott Smith. As of recently, I've been interested in sampling music to the sound of DJ Shadow and the Avalanches.

Q. Make a list of 5 albuns of all time…
3. My five top albums currently would be
• Self Titled - The Avalanches
• EP Collection - My Bloody Valentine
• Endtroducing - DJ Shadow
• Cyborgs Revisited - Simply Saucer
• In Rainbows - Radiohead

Q. How do you feel playing live?
4. I haven't played live in a while, but when I did I would get a mix of adrenaline and nervousness. It's the same feeling I get when I'm in my "studio" mixing and mastering. There's no other way to explain it.


Q. How do you describe Swanhoppers sounds?
5. Swanhoppers' sound is an homage to to the experimental, high energy, and familiarity of the music I'm influenced by. As for the music, I try to make music you can take on a drive.

Q: Tell us about the process of recording the songs ?
6. I can go all day talking about what I did to record my songs! Before I get into the technical stuff, let me just say that I love to layer my guitar tracks and that I use sampled drums. The earliest EPs were made using a basic pedalboard (overdrive, fuzz, delay, reverb) running through a Fender Munstang 3 and recorded using a Sennheiser 835 into a Focusrite interface. The bass guitar was recorded straight into the interface.

The "Lutalica" album was made using the same guitar rig, with the addition of a wah pedal and a chorus pedal, running through the Fender Mustang 3 and/or Vox AC30 and recorded using the 835 and two SM57s.

Currently, my pedalboard now includes a pitch shifter and runs through the Vox and Fender Twin Reverb. For recording, I use an EV 635, SM57, and SM58. I run my bass through a fuzz pedal and the Twin and record using the SM58. The drums were layered and tuned to imitate the sound made by the drums in MBV's "Isn't Anything."

Q. Which new bands do you recommend?
7. In my immediate area, it's gonna have to be "The Voxes" and "Muskk," though I wish I had time to see them live.

Q: Which band would you love to made a cover version of?
8. I have a couple songs I wouldn't mind covering, but to cover a single band's discography isn't something I'm inclined to do.

Q: What are your plans for the future?
9. In the future, I plan to release another set of songs as well as re-release the "Ripples" EP when I have time away from my other project.

Q: Any parting words?
10. I'm thankful to live in a time where music is abundant and not confined to a status quo. It has also made it very difficult to differentiate yourself from everyone else making music so I want to extend my thanks to everyone who has supported me by downloading my music. My inbox is open to anyone who wants to talk about gear or anything in general. Thank you for the interview, Renato!
*
*
*
Thanks