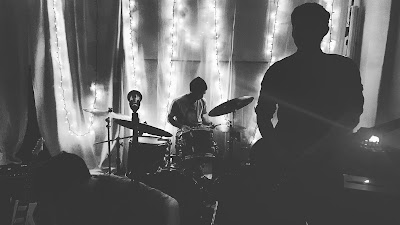 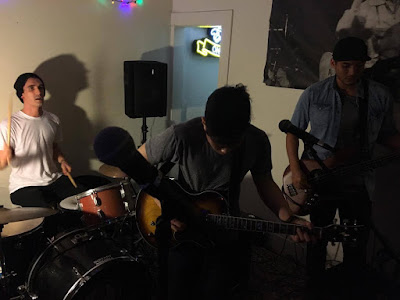 Q. When did Future Myth start? Tell us about the history...
Joseph: Ben and I have been playing music together since high school, and we’ve been in quite a few projects since. We started out by covering psychedelic rock songs in my garage. We didn’t form our first serious band until Nicholas later joined as a bassist, but that project fizzled out when we all moved away for college. We took a break for a while which allowed us to focus on our own creative pursuits and that ended up being really beneficial in the long run. Future Myth didn’t actually officially start until Kevin joined last year. We really needed drummer at the time, and he just graduated from jazz school so the timing worked out pretty well. We had a few songs we were sitting on, and we wrote a couple more. Then we just decided to record what we had, play some shows, and see where it went from there.

Nicholas: Pretty neat how all four of us have kind of known each other for years. We all went to the same middle school but didn’t quite become friends until later in life.

Q. How do you feel playing live?
Kevin: Whether we are playing a show on a big stage in a club or just at a house party with all our friends, I think we all really feed off of the crowd. When the crowd is all partying and having a good time, we reflect that energy in our performance. There is a give and take between the band and the audience. On one hand it’s up to us to pick the crowd up and get them excited, but on the other hand, the audience is what gives us that energy to excite them in the first place.

Nicholas: I agree with Kevin. There’s definitely a rush to it that’s unlike anything else. Being able to work all the energy in the room is pretty cool.

Ben: It feels great to play live because it's fun to see people enjoying themselves, especially if I can contribute to it.


Q. How do you describe Future Myth's sound?
Joseph: That question has always kind of been difficult to answer. We like to change it up a lot,
and what we’re individually listening to really reflects how we sound as a whole. I think simply
put, we’re just a rock ‘n’ roll band.

Q: Tell us about the process of recording the songs
Joseph: Recording Flashbulb Memories was a really collaborative process. We had a lot of help during different stages to bring it all together. For some of the bigger vocal parts on the EP, we brought a bunch of friends together in one room and just had them all sing. We also got San Francisco’s Magik*Magik Orchestra to come in and help out on some violin parts which really brought a couple songs to life.

Q: What are your plans for the future?
Kevin: I’d like to focus on performing, and touring as much as possible. Basically just have some fun traveling and playing music with friends.

Ben: Also, although we’re excited to have released our EP, we’re currently in the process of writing new material. There is no set date on the release, but we eventually want to incorporate new material in our live set before recording.

Nicholas: I want us to take Future Myth as far as we can. Big stages, big crowds. There’s a lot that we have to say through our music, and I think we can bring something new to the musical table.