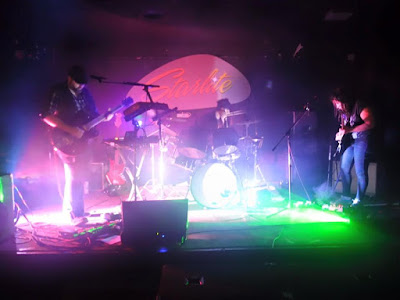 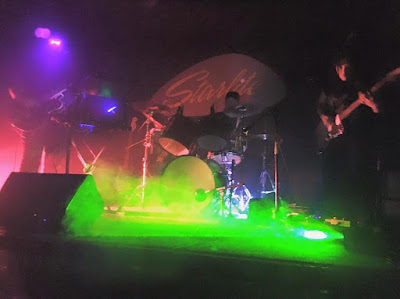 Q. When did ghostplay start? Tell us about the history...
Jason and I (Izzy) had been playing in separate bands which played shows together often around our home town in Sacramento, CA, and during those shows, we always felt there was a musical connection. We had similar musical interests and influences, and I had always been drawn to Jason’s interesting vocal melodies and tone. Hence, when I parted ways with a previous project in 2012, and was looking for something new to get involved in, he was the first person that came to mind to work with.

When we first started writing together, our initial intention was to be just a two piece band and find a way to incorporate a drum machine. We wrote a few songs in this manner, and the recording of one of those old songs called ‘Awkward’ did eventually see the light of day and was released on a compilation called ‘The Valence Effect’ (put out by our label Noise Loves Audio in 2015). Overtime, we eventually realized that we really needed a live drummer, it was just too difficult for us to try and write the drum machine parts, and it was even more difficult transitioning that setup into a live setting.

In our efforts to find a drummer, we recognize that we were extremely fortunate to have been able to work with 3 talented drummers. Mark Rocha was with us to help shape our first few songs, and we were able release a few raw demos that picked up some good hometown buzz, and allowed us to get our footing in our local scene. In 2014, when Mark left to pursue other musical interests, our close friend Mike Couloures stepped in and did an amazing job recording our songs found on our debut EP ‘33’ (also released by Noise Loves Audio in 2015).

While we were putting the final touches on the ep, and in order to continue performing live, we started working with our newly found and current drummer Armando (Mando) Gonzales. Mando has been playing with us for a couple years now, and we are continuing to write new music with him. He has really kept us moving forward, not just in our ability to continue to perform live, but also with helping us to evolve in our song writing style. He has also brought out a more upbeat aspect to our sound and has been really essential to helping us brush up on our live performances.

In retrospect; from starting out with jamming with a drum machine, to recording our EP ‘33’, and redeveloping our live performance, it’s been a pretty long process for us. However, I think it’s reflective of our continuing goals which are to take our time writing, and to make sure we put out quality songs that will prove to have longevity. We aren’t in any hurry; we’re naturally just a slow moving band. We think it will be worth it for those who are interested in the music we’re creating.

Q: Who are your influences?
There are so many bands that have influenced us, but most recently we have been listening to a lot of bands such as Beach Fossils, Beach House, DIIV, Motorama, Viet Cong, Ought, Protomartyr, Bauhaus, Deerhunter, Radiohead, and so many more, but these in particular have been in our current regular listening rotation.

Q. Make a list of 5 albums of all time…
This is a very tough question! For now we have settled on
Weird Era Cont, by Deerhunter ;
Cold Toads, by Friendo;
Calendar, by Motorama;
Clash the truth, by Beach Fossils;
and Viet Cong, by Viet Cong.

Q. How do you feel playing live?
For us the initial experience of playing live was awkward, none of us are accustomed to being in the spotlight while playing, so we’ve really adjusted our live setting to make it more comfortable on stage. We don’t think we are very interesting to look at, and we wanted a setting that would be reflective of our sound. Knowing that, we recently started incorporating an ambient light show. I think it has worked to make us more comfortable on stage, and at the same time, has allowed us to put on a visually more interesting live show.

There are still a few more adjustments to our live setting that we are making, and we will eventually be happy with performing live!

Q. How do you describe ghostplay sounds?
Our sound has a good variance between being dark at times, and also upbeat, really just depending on the song that we are playing. But we also maintain a consistent ambient, experimental aspect about us. Our sound has a big feel to it, which in a live setting, really works best in smaller club settings, and allows us to capture the moodiness of our tones.


Q: Tell us about the process of recording the songs?
For our EP ‘33’ we were very lucky to be able to work with Monte Vallier of Ruminator Audio. He is an incredibly experienced producer out San Francisco, CA. Monte has worked with a lot of bands whose sound we really enjoy and felt fit well with what we were trying to create. Prior to getting into the studio we spent about a month to prepare, really tightening up the songs, and fleshing out any loose ends. From there, we spent about a week in the studio tracking the basics of all 5 songs. After which, Monte began the mixing process. He did an amazing job giving them life, and working with us to shape them to how we envisioned each song. We’ve both recorded before in previous bands; but this time, this was overall one of the best experiences we have had for recording. It was such a comfortable and fun experience; and we’re really looking forward to working with him again in the near future.

Q. Which new bands do you recommend?
We recommend checking out some bands from our home town of Sacramento, CA. The music scene here has been really evolving overtime, and some really talented bands have been popping up. We highly recommend checking out ‘Silver Spoons’, ‘All About Rockets’, ‘Desario’, ‘Chrch’, ‘(waning)’, ‘Death Party at the Beach’, ‘Mindflowers’, and our favorite Oakland band ‘Mall Walk’.

Q: Which band would you love to make a cover version of?
We think it would be fun (and funny) to cover Karma Chameleon, by Culture Club.

Q: What are your plans for the future?
Our future plans include our main goal of recording a full length album. Right now we are in the midst of writing new songs, and getting ideas of what direction we want to take them in. In the meantime we are still playing shows in Sacramento, and we are also very excited to be venturing out to play in San Francisco for the first time on April 9th at the Milk Bar.

Eventually we hope to do a small tour, but we are taking our time with it as we want to be prepared for when we do take that step. As we mentioned before our live set has taken some time to develop, and we want it to be a fun experience.

So good things in the future for us, and lots of recording!

Q: Any parting words?
Stay tuned for what we come up with for our first full length album!

Also, we would like to thank you Renato Malizia for taking an interest in our music, and for helping us to spread the word! Thanks to our family that have supported our musical ventures over the years, thanks to all our friends, and acquaintances in the local Sacramento music community, thanks to Monte Vallier of Ruminator Audio, and thank you to Michelle Hass-Torres of Noise loves Audio and Spectre Records for helping us to release our debut EP ‘ 33’! Cheers!
*
*
*
Thanks