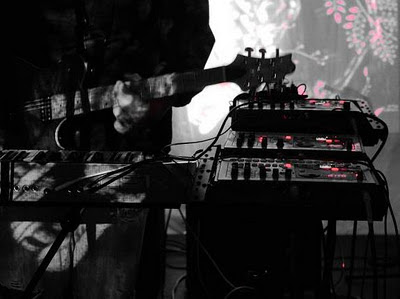 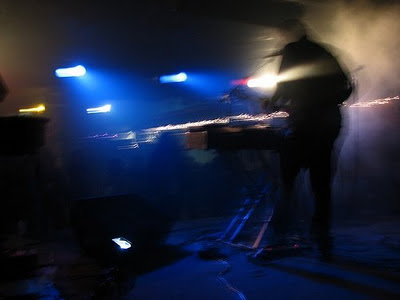 Q. When did Ars Phoenix, tell us about the history...
A. Ars Phoenix has a somewhat confusing history due to several relocations, recurrent lineup changes, and a series of unintentional, long-term hiatuses. The most recognizable form of Ars Phoenix, the Hanging Fire lineup of myself (vocals, synths, beats, guitar) and Paige Fowler (guitar), took shape in 2008. Paige and I had both just moved to Gainesville, Florida to begin working on PhDs in English Literature at the University of Florida. I had an album’s worth of material—2008’s Engines of Progress (FDO Recordings)—that I wanted to release and support with live shows, so I was in search of either a guitarist or a keyboardist who could help me perform the recordings live as a duo. We met when Paige overhead me chatting about music with another graduate student at an orientation meeting. Shortly thereafter, Paige and I began rehearsing and retooling the old material as well as writing, slowly but surely, what would eventually become 2011’s Hanging Fire (FDO).
Long before all that, though, I had started Ars Phoenix as a solo project in 2001/2002. At the time, I was in a very ambitious band called Kilborough, in which we attempted to blend post rock, shoegaze, ethereal, and experimental electronic music. It was a thrilling experience as well as a head ache, because the band had too many strong personalities, all competent songwriters with inventive ideas, that inevitably came into creative conflict. We peaked early with a sought after opening spot with The Faint, who were touring in support of Danse Macabre at the time, but the torturous process of completing our second album (recently released on cassette by our friend Patrick Norris) led me to quit.
I then started using Ars Phoenix as a vehicle for realizing my vision of Kilborough, although Ars Phoenix ended up only partially resembling my idealization of that band. The other members of Kilborough have since gone on to do some amazing things, including A Soft Perversion/Leo Ashline and The Nude Scene. Perhaps most notably, ex-Kilborough guitarist Todd Brooks has found substantial and well-deserved notoriety with his Pendu Recordings label and NYC dance parties, both of which became central fixtures of the Witch House genre/movement in 2010.
During the solo version of Ars Phoenix, I was living in Naples, Florida. I didn’t play out much, but when I did, I enjoyed the support of some great musicians: Sean Stevenson and Chris Farren from Fake Problems, Joe Merrill from Daleth, and Terence Hannum, now of Locrian. But Ars Phoenix kind of fell off the map shortly thereafter when I moved to Orlando to pursue a Master’s degree. I wrote and recorded a bit here and there, but Ars Phoenix was pretty much nonexistent until I moved to Gainesville and resurrected the project with Paige’s help. Just recently, the band has gone through another lineup change, the addition of my significant other, Caitlin, on synthesizer. With the new lineup and my PhD now complete, we’re more mobile than ever and hope to make 2012 a year full of live shows.
Q: Who are your influences?
A. I’m pretty obsessed with the early days of 4AD, especially vintage Clan of Xymox and, of course, the Cocteau Twins. Joy Division/New Order, The Cure, and The Smiths are also obvious influences, but I also have a deep fondness for Slowdive and My Bloody Valentine, and it would be a huge oversight for me not to recognize the role that Godspeed You! Black Emperor and Aphex Twin have played on my musical outlook, even though the pop sensibilities of Ars Phoenix might make those more soundtracky/experimental influences less recognizable to some listeners. Speaking of soundtracks, I also love horror and sci-fi film scores—John Carpenter, Goblin, Vangelis, Morricone, and Badalamenti come to mind. So I guess it is fitting that a recent review compares the atmosphere of Hanging Fire to the “psychotronic film genre.” I also love classic synthpop and the more electronics-driven side of British post-punk, including Depeche Mode, Cabaret Voltaire, and old Human League, as well as bands like Danse Society and Fad Gadget. More surprisingly perhaps, my formative years were dominated by Dischord Records, especially the almighty Fugazi, Nation of Ulysses, and Hoover, which explains the trace of post-hardcore some listeners and reviewers have perceived, particularly on Engines of Progress. Lately, though, Caitlin and I have been on a deep Dead Can Dance and Piano Magic kick, and I’m keen to see if those influences will impact the material we plan to begin writing next year. 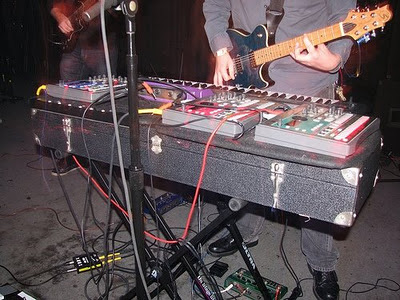 Q. Made a list of 5 albuns of all time…
A. That is such a tough question, nearly unanswerable. I will do my best, but if you asked me again in a week, the list would most certainly shift a bit! In no particular order my top 5 are:
The Cure – Pornography,
Slowdive – Slouvaki,
Clan of Xymox – Medusa,
The Smiths – The Queen is Dead,
Joy Division – Closer,
John Foxx – Metamatic.
Q. How do you fell playing alive?
A. I’m addicted to playing live. On the drive home from a show, all I can think about is how much I wish we were on tour, because the wait between shows is going to kill me. While in the moment of the performance, I suppose I feel vital and expressive in an uninhibited way that is not quite acquirable in day to day life. During more hypnotic passages of the songs, there’s also a meditative quality to the feel of the performance. The vibrations brought on by extreme decibel levels and the wash of sound brought on by the use of delay pedals and layered guitars and synths almost has an immersive effect that, when at its best, can make you feel subsumed into the sound…like a release from the individuation of ego.
Q. How do you describe Ars Phoenix´s sounds?
A. To my mind, Ars Phoenix is an electronics-driven post punk band with shoegaze-influenced guitar tones, the moodiness of vintage darkwave, the hooks of classic synthpop, and the cinematic edge of post rock, lo-fi film scores, and experimental electronic music.
Q: Tell us about the process of recording the eps?
A. I’ve recorded every Ars Phoenix album to date on a Boss BR8 digital 8 track. After the fact, I usually have someone do some software mastering, but I’ve never used any software during the actual recording of the tracks, only hardware. The recording and songwriting also blend together, with the songs mutating as the needs of recording can lead to happy accidents regarding song composition.
Q. What´s represents the shoegazer classic era to the band?
A. I tend to construe things broadly, so some of my answers might veer a little beyond a purist’s definition of shoegaze. That being said, Slowdive, My Bloody Valentine, Ride, and Chapterhouse immediately come to mind, but so do Cocteau Twins, Catherine Wheel, Lycia, and even The Chameleons, even though some of these bands might be seen more as atmospheric/ethereal pop-rock than proper shoegaze.
Q. Which new bands do you recommended?
A. Of course, Screen Vinyl Image, whom I absolutely love and had the privilege of playing with in an Arlington, Virginia basement in the summer of 2009. I’d also like to recommend a Gainesville band called Averkiou, who are not exactly a shoegaze band, but they do apply a touch of shoegaze influence to a raw and raucous indie pop sound. My two other recommendations are more on the post-punk/darkwave tip, but you must check out Entertainment and Feeding Fingers, with whom we’ve also had the honor of sharing the stage.
Q: Which bands you love to made a cover version?
A. The only covers we’ve ever learned were for a Joy Division/New Order tribute show. We played “The Eternal,” “Dead Souls,” “Transmission,” “She’s Lost Control,” and “True Faith.” We still get requests for our versions of “Transmission” and “She’s Lost Control,” though we’ve got too many originals to choose from now, so adding a cover into the set has become kind of tedious.
We also used to play a cover of "Cold" by The Cure. I was Robert Smith one Halloween, and we played the cover all weekend at a few different Halloween shows--great fun! 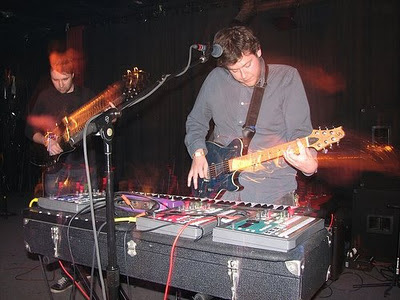 Q: What´s the plans for future....
A. Writing, recording, and more shows.
Q: Any parting words?
A. I like to think that if Lynch/Frost had been able to film season 3 of Twin Peaks, Bob would have been exorcised from Coop. Coop is too gentle of spirit and pure of heart to go down in possession from a dark spirit. Usually, I prefer ominous endings, but this is a notable exception, just because I love that charact.
*
*
*
Thanks Jon