Fait Accompli with Blindness - An Interview 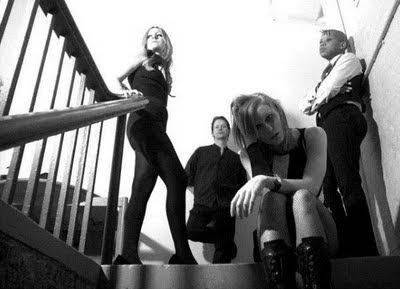 Q. When did Blindness starts, tell us about the history...
A: At the end of 2007 when I left my previous band I started learning to use software. I knew Debbie from Curve and Kendra from her previous band Flame On and knew I'd like to work with both of them. Debbie was playing with Dean Garcia's band SPC-ECO and I went to see them a few times and eventually approached Debbie about playing on some tracks of mine. She agreed to have a listen and after that agree to do some recording, so I took a the tracks on my laptop to her flat and we did loads of recording in an afternoon.
I asked Kendra about playing but she was tied up with Flame On at the time. A few months later she came back to me as Flame On was starting to wind down and said she'd be up for playing so we got practicing and booked our first gig as an all-girl three-piece in May 2009.
Later on that year, Debbie ran into Alex, who she had played with years previously in Night Nurse, and he said that he was looking for a band so we got him down to practice and rest is a very noisy history!
Q: Who are your influences?
A: Kate Bush, Nine Inch Nails, Curve, PJ Harvey, The Jesus & Mary Chain, My Bloody Valentine, Garbage, The Fall.

A: Hounds Of Love - Kate Bush

Q. How do you fell playing alive?
A: Alive. And sweaty
Q. How do you describe Blindness´ sounds?
A: Electro filth, walls of guitar, girly lushness vocals, pounding rhythm section.
Q: Tell us about the process of recording the debut ep?
A: Guitars were mostly recorded in my living room. The neighbours are very understanding.
A: The programmed drums, synths and vocals were recorded in my living room and then I took them to Debbie's living room where we recorded guitars. Bass was recorded in Kendra's living room and then it was mixed by Jim "Ping" King and myself in Finsbury Park.

Q. Which new bands do you recommended?
A: The Koolaid Electric Company, Pope Joan, Teeth Of The Sea
A: Blindness. Oh, apart from us? Hold Kiss Kill.
Q: Which bands you love to made a cover version?
A: We've done a few - Pet Shop Boys, Slits, Beyonce.
What´s the plans for future....
A: To have a good time. All of the time. That's my ambition, Marty.

Q: Any parting words?
A: WALLOP!